“The further society drifts from the truth, the more it will hate those that speak it.”  —George Orwell

“The only safeguard to protect the American people from government’s control over the money and the guns is the U. S. Constitution.  The only protection the Constitution has from government corruption or perversion, is the people demanding that the government adhere to the principles of the constitution or face the consequences of armed revolution.”  —Ron Ewart

The Paris riots are and were as predictable as sex producing babies and Paris today is only a precursor to what can happen in New York, Los Angeles, Chicago, or Seattle tomorrow if we allow Zealots and Lunatics to run America into the ground for political agendas that fly in the face of individual freedom and liberty.  Trillions for climate change is one of those lunatic fringe agendas that has nothing to do with climate and everything to do with the elite’s control of the world’s masses and wealth redistribution from developed countries to un-developed countries where the world’s elite controls the flow of the money.

Somehow we avoid the “truth” that if you squeeze a tomato hard enough, eventually it will ooze out between your fingers.  Paris is oozing right now because of the strangling power of the moneylenders and the zealots and lunatics in government and radical fringe organizations!  And let’s not forget that Parisians don’t have the right to bear arms.  Americans do!

America’s thirteen colonies had devised a medium of exchange which they called script.  They only printed 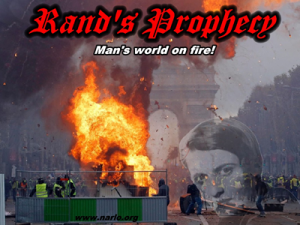 enough of the script to keep commerce and the exchange of goods and services within the colonies, in balance.  When King George and the Bank of England heard of this, they quickly passed legislation in the House of Commons to require that all taxes to the crown would be paid in gold and silver.  Then in further retaliation the British government increased the taxes on the colonies in the form of the Stamp Act and taxes on Tea.  This act by the British quickly depleted the gold and silver of the colonies and led to a virtual depression.  The only outcome of this was to force the colonials between a rock and a hard place, leading them to revolt against the King.  In response to the revolt of the New World colonials, the King sent in the troops and the guns and a revolution was born.  If you don’t think that history will repeat itself, you will find that the artificial bubble you are living in is a mirage.

Since the dawn of human civilization, the masses have been and still are, in a constant struggle against the ever- increasing power of centralized government.  Whether it be kings, despots, dictators, or even democracies, centralized power grows and grows, like a black hole sucking up everything in its vicinity, until that power envelops and consumes all those who would attempt to break it up, or destroy it.  Even though the Founding Fathers went to great pains to inhibit the rise of the federal government by limiting its powers in the U. S. Constitution, every succeeding executive, legislative and judicial branch of government since George Washington, has wriggled and finagled around its constitutional restraints into ever-increasing political power.   The jaws of absolute power are open wide and lie there in our not too distant future, if the people don’t take it upon themselves to break up that centralized power and restore it to the states and to the people, as it was intended by those who gave birth to freedom over two centuries ago, at great sacrifice.

Throughout history, when centralized power is broken up or destroyed, it usually comes from the people violently rising up, en masse and restoring political power in the people and dividing all such power into smaller jurisdictions.  This was one of the core principles of the U. S. Constitution.  It was the states that created the federal government, not the other way around.   It is the states and the people that are supposed to have the supreme power under our Constitutional Republic, not the federal government.

Everything we see happening today in our own country and around the world, mirror’s the prophecies of Ayn Rand, in her novels and other writings.  Her whole premise was based on the sanctity of the individual, wherein she wrote, “the smallest minority is the individual.  Those who deny individual rights cannot claim to be defenders of minorities.”  The whole concept of the Declaration of Independence and the U. S. Constitution was built on the principle of unalienable individual rights, a gift from nature or God.  Today, the Progressive ideology is, political power must be held by the collective (in other words the mob), not the individual.

Well over 30 years ago, Ms. Rand wrote:  “We are fast approaching the stage of the ultimate inversion: the stage where the government is free to do anything it pleases, while the citizens may act only by permission; which is the stage of the darkest periods of human history, the stage of rule by brute force.”  If you will look in the mirror and be true to yourself, you will have no choice but to acknowledge that we exist in this dark period today.  Everything else you hear about America from the normal sources, is propaganda and an illusion.  The stark reality is, you are a government debt slave.  You just don’t know it yet.

People wondered, how could Ayn Rand have foreseen all this? Was she a prophet? No, she answered. She had simply identified the basic cause of why the country was bouncing from one crisis to another.  The collusion between government and special interest groups started taking America down a path that will eventually spell her demise, all based on the lust for power and money.  The cliff she approaches draws ever closer.

In Rand’s Atlas Shrugged she wrote:

“You have cried that man’s sins are destroying the world and you have cursed human nature for its unwillingness to practice the virtues you demanded.  Since virtue, to you, consists of sacrifice, you have demanded more sacrifices at every successive disaster.” (Sacrifice equals taxes and regulations)

The “moral ideal” that Ayn Rand describes is manifested in the multiple insanities of:

We could name many more of the false “moral ideals” Ayn Rand describes, that have brought us to today’s reality, where riots and burning cities will become the norm, not the exception.

Sadly, rather than bringing control out of political chaos, the people will wait until their cities are burning and the only alternative left for the righteous to gain the high ground will be civil war or revolution.  The people will watch as our international borders evaporate and are overrun.  National sovereignty will melt in the crucibles of one-world-order.  The people will sigh when we finally run out of other people’s money to pay for a society that has grown weak, lazy, apathetic and decadent.  They will moan and groan when their government declares martial law and implements a police state.  Then they will say, after the bullets fly, the bombs go off and the FEMA camps fill up, “well what could we have done to prevent it anyway?”  What indeed!  That’s what the German people said twice in the Twentieth Century and 70,000,000 to 100,000,000 had to die because the people failed to rein in the insane ambitions of their government leaders and special interest groups.

So it begs the question of why we, or anyone else for that matter, should write articles forewarning their readers what the future holds, when, in the end, history tells us that the people, who live in a constant state of fear, aren’t going to do anything about it anyway, that is until they have to “fight when there is no hope of victory, because it is better to perish than to live as slaves?”  (Winston Churchill)

“Man is free to evade reality, he is free to un-focus his mind and stumble blindly down any road he pleases, but he is not free to avoid the abyss he refuses to see.”

Ladies and gentlemen, the Paris riots have shown us a glimpse of the abyss we approach, in a world controlled by a massive government apparatus bent on absolute power, the money brokers determined to make the people debt slaves and radical special interest groups who force their ideology down our collective throats using government and law as the lever.  But if we are too blind to see it, we are doomed to the Hell that awaits us there at the bottom of the abyss, where individual freedom and liberty do not exist and where war becomes the only viable alternative to escape the horrors of abject slavery.