Part 3: Interesting Responses To My Commentaries: Flood The USA With Third World Refugees

Part 3:  The goal is to flood the USA with 100 different 3rd world dependents and cause a destruction of our Constitution.

Without a doubt, the United States stands eyeball deep in trouble in 2022.  It’s not only the gas prices, food prices and tremendous political divide—it’s also about the loss of the rule of law, common decency of citizens toward one another in the big cities, and most importantly, a loss of loyalty to our country.  Our kids don’t respect our flag, don’t understand the worth of our Constitution and frivolously remain addicted to their cell phones.

Thankfully, Top Gun—Maverick hit the theaters recently to rave reviews as to the fact that it wasn’t racially divisive, but provided positive patriotism, honored America, and enjoyed a love story.  We all want that! Well, most of us do, a least. Probably not BLM, Antifa and La Raza.

Unfortunately, there are too many individuals and groups that want to tear down our country.  As I said in the latest columns, we need STRICT enforcement of our laws—and severe jail time for criminals.  I mean slam them into their own personal jail cell to scare the rest of those thugs into becoming law-abiding citizens.

Let’s face it, Jussie Smollett tried to create a race war with his “noose” and two other immigrants “beating him up”, and then, he lied like Al Capone, but he was found guilty…but he’s still walking around on appeal.  He needs to be slammed into jail and taught a lesson.  So do the rest of the thugs, liars, cheats, killers and arsonists!  We need to stop them from their anarchist activities.

Here’s a response to one of my commentaries on “Uvalde Shooting”:

ALL of the entities you have been knocking on are not going to answer.  Upton Sinclair 100 years ago wrote “Brass Check”. He chronicled the takeover of ALL independent media of the day by Rothschild’s agents.  That got the US into WW-1.

The goal is to flood the USA with 100 different 3rd world dependents and cause a destruction of our Constitution.

I feel your frustration and live it every day.  Growing up in Miami I have lived it.  The slow burn immigration problem has just had gas dumped on it with the removal of Trump and the new puppet Biden installed.  This is all intentional and controlled by City of London debt/slave crime cartel!

As we age, our replacements grow up never knowing what WE had here in our country.  We are the remnants, but we are being ignored.  I feel for my children and what they will have to deal with after I’m gone.

Paper ballot elections hand counted and total elimination of corporate funding of campaigns is the ONLY hope to change out the communists in DC.  If the ballot box fails it will be the ammo box that will eventually stop this. JE, Florida

This response has to do with my commentary on the fact that we don’t possess enough water, energy and resources in America to sustain another 100 million immigrants projected by 2050:

Nobody talks about this reality—we’re running out of water at a high rate of speed.  The West continues in an eight year “exceptional drought.”  The Colorado River cannot continue sustaining 40,000,000 people in California.

Soon the intake pipes at the Hoover dam will be exposed.  The massive turbines will starve, and the entire region will go dark. 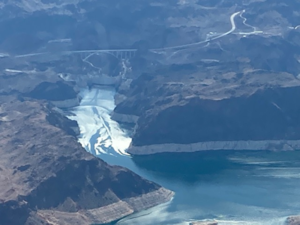 There is no viable replacement for the mega power generated.  Las Vegas will go dark, no A/C and no way to pump water and sewage.

Nature has a way of balancing things.  Pics from my cockpit on recent approach to Las Vegas.  I have been watching the lake drop for past 25 years. JE, airline pilot, Florida

(Photograph by the response writer with permission.)

As to one of my commentaries on “Endless legal and illegal immigration”:

Apparently, no one gives a rats-rear-end…because this horrific number of people will continue exploding into our country without pause and without reason…until there are no solutions as to water, energy and resources.  Honest to God, I’ve tried to interview on 60 Minutes, NPR with Terry Gross and Scott Simon, PBS, NBC, CBS, ABC, Tucker Carlson, Anderson Cooper and many more—for over 20 years.  And, I am a darned excellent speaker on this subject.

He responded, “There is a 100-year-old book by Upton Sinclair, “Brass Check”   He exposed and documented the globalist takeover of all media of the day.  Every major paper and radio station has an editor that feeds and edits the content.  Same today.  All the treasonous subjects you mentioned are all controlled.  They allow opposing views like Carlson but they all, including Rush, are under 100% control of their handlers.  It would be a cold day in hell for you to ever get to speak.  If you do be ready to get bushwhacked.”

As I’ve offered for over 20 years, these two videos need to be seen by every American, every governor, every senator and every college and high school student.  This is what everyone faces within the next 28 years if not much sooner.