Time to get out the ledger.

On the left––literally––we have had nearly eight months of rampaging criminality and violence in the many Democrat-controlled cities in our country, all conducted by thugs belonging to groups called Black Lives Matter and Antifa. This is the short list of what they have done: 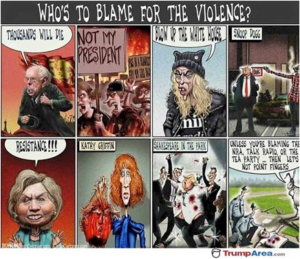 In all those eight months––220 days, over 5,000hours––what was the reaction of Democrats, both elected and civilian?

A thunderous silence. Not a word of opprobrium or disapproval or condemnation. Not. One. Word.

Because, as the esteemed Daniel Greenfield points out, Democrats heartily approve of violent acting-out riots ––as long as they support Democrat ideology! In 2018, he reminds us, there were “glowing stories” about the hundreds of Women’s March members who were engaging in “direct action” to disrupt the Senate’s Kavanaugh hearings. They blocked hallways, shouted down Senate members, and draped protest banners from balconies. Democrats cheered them on.

“In 2020,” Greenfield continues. “Black Lives Matter rioters vandalized the Lincoln Memorial and the WW2 Memorial, along with statues of Gandhi, General Kosciuszko, and Andrew Jackson. And Democrat House members proposed bills to protect the racist mobs from law enforcement.

“Meanwhile the BLM mob besieged the White House and battled Secret Service personnel, allegedly forcing the evacuation of President Trump and his family to a bunker. And a bail fund backed by Senator Kamala Harris and the Biden campaign staffers focused on helping the rioters and looters get out of prison. 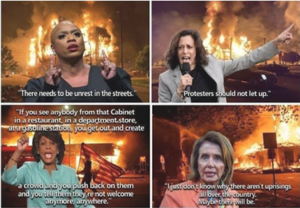 “Now, as the Democrats expect to take power,” Greenfield writes, “they suddenly decided that rioting is bad.”

And let’s not forget that it was only last summer that Kalamity Harris encouraged her supporters to donate to the Minnesota Freedom Fund to provide bail money to the militant anarchists facing charges for setting fire to Minneapolis.

But don’t tell these things to Democrats who observed 55,000 hours of BLM and Antifa destruction with nary a critical word but watched the 4-5 hour incursion into the U.S. Congress on January 6thand could only wring their hands, clutch their pearls, gasp in horror and exclaim: the building, the building, the history, the sanctity, the inviolability!

BACK TO THE LEDGER

On the right––literally––you have a president who has been conducting dozens of rallies over the past four years with jaw-dropping attendance. The “Stop the Steal” rally on January 6thwas estimated to have about 150,000 attendees––with no untoward incident, upheaval, or arrest until the Capitol was breached. Back to this later.

Before this rally, the president chalked up accomplishments that made America safer, stronger, and richer. But because he repudiated both the paltry achievements and political philosophies of all his predecessors and the corrupt shills they left behind in the swamps of D.C., and because he had access to their indictable criminality, he became the biggest threat to the political establishment that ever existed. That said, President Trump:

SO WHAT WAS THIS COUP ALL ABOUT?

On November 3, 2020, the presidential election was held. Routinely, polls close at about 7 or 8 p.m., the votes are tallied electronically, and the Democrat operatives who pose as TV reporters start calling states as early as 9 or 10 p.m., with the final result usually not known until noon or so the next day.

On November 3rd, the entire world––which follows American elections assiduously––witnessed something unprecedented in the history of American voting. Just as President Trump was winning a huge number of states––and electoral votes––and appeared to be winning most or all of the six battleground states by a landslide, the tallying stopped abruptly. And it didn’t start again. Not for an hour. Not for two hours. Not for three hours. After three hours it did start again, and the whole world saw actual MAGIC befitting David Blaine, even Harry Houdini!

All of sudden, Joe Biden magically gained hundreds of thousands of votes, ultimately enough to win the election. This in spite of a Mt. Everest of reports of massive voter fraud into the multimillions, including (this is the short list):

All were strangely rejected by American courts––the same courts that believe traffic violations deserve their attention––but apparently not presidential voter fraud! Umm…does anyone else smell the rat I do?

As a final tribute to the outgoing president, a huge throng traveled to Washington, D.C. the other day to hear him speak and cheer him on. His entire speech was a rehash of the voting fiasco and an exhortation to protest peacefully the choosing of electors––and not the fomenting of violence that the corrupt media drones on about. Read the speech here.

Then, as if choreographed by George Ballanchine, a group of rally attendees marched across the street to the U.S. Congress to try to delay Congressional certification of the Electoral College vote. Who were they?

According to unassailable reporter Paul Sperry, a former FBI agent on the ground in Washington D.C “texted me and confirmed that at least 1 ‘bus load’ of Antifa thugs infiltrated peaceful Trump demonstrators as part of a false flag ops.” Mmmmmm.

To compound this allegation, we then see that the Capitol policemen actually opened the doors to the protestors and invited them inside. Who authorized this? You can watch the whole thing here. 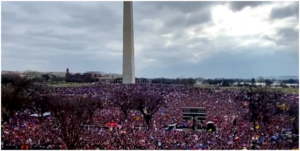 Of course, the Democrats and their acolytes who have been hounding the president for five years, besieging him with false accusations, dragging the entire country through their “show trial” hoaxes (of Russian collusion, Ukraine, Stormy Daniels, Impeachment, et al), topped off this false-flag operation with demands that he resign immediately. And in the predictable behavior of all fascists, the social media outlets run by the globalists among us––Twitter, Facebook, Instagram, Shopify, Snapchat, on and on––cut off his ability to communicate with the American people. Starting to smell the same rat?

Yet life goes on. President Trump will leave office as a man of monumental accomplishments and tremendous esteem from more than the 75-million people who voted for him. If he starts a third political party, there is no counting the numbers of conservatives, moderates, blacks, Hispanics and women who will jump eagerly on board. If he starts a media company, Americans will have their first taste in years of genuinely unbiased news. And if he and Melania––who served America so gracefully and effectively these past four years––decide to go back to their old life, every one of their admirers will wish them only abundant health and great happiness.

Americans, unfortunately, will have to endure an Obama-redux regime. But America is strong and we will weather this debacle as we did the two failed terms of Obama, all the time hoping for the appearance of another peerless populist president like Donald J. Trump.