Pearl Harbor Was No Surprise

(Note: Several years ago, I twice alerted the Secret Service to be alert for a drone attack. Then Venezuelan President Maduro was attacked by drones. Now, the Secret Service needs to be vigilant for a Squeaky Fromme type individual who may try to assassinate Joe Biden in order to be historically responsible for making Kamala Harris the first female President of the United States.)

Relevant to the December 7 anniversary of the Japanese attack upon Peral Harbor, the American public has been told that the Japanese fired the first shots of World War II, but actually, the U.S. did! Several hours before the attack upon Pearl Harbor, 5 Japanese minisubs were seen there surveilling American preparedness. They were pursued and destroyed.

On November 25, 1941, Secretary of War Henry Stimson entered into his diary: “President Roosevelt brought up the event that we are likely to be attacked perhaps (as soon as) next Monday,…and the question was how we should maneuver them into firing the first shot.” On the same day, Army Chief of Staff Gen. George Marshall told select news reporters: “The U.S. is on the brink of war with the Japanese,” and 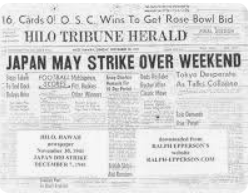 according to Time magazine reporter Robert Sherwood, the attack would occur within the first 10 days of December. The headline on THE HONOLULU ADVERTISER for November 30, 1941 read “Japanese May Strike Over Weekend.” (photo available)

Rear Admiral Robert Theobald was at Pearl Harbor at the time, and in his THE FINAL SECRET OF PEARL HARBOR: THE WASHINGTON CONTRIBUTION TO THE JAPANESE ATTACK, he reveals: “Not the slightest hint of all this (information indicating the Japanese planned to attack Pearl Harbor was known to the Roosevelt administration) was given to Admiral Kimmel and General Short. Why was such irrefutable evidence of the coming attack so withheld? Why did Washington contribute so completely to the surprise feature of the attack? There can be only one answer—because President Roosevelt wanted it that way!”

Others had already informed Washington of the coming Japanese attack. John O’Donnell in the May 17, 1951 NEW YORK DAILY NEWS revealed that in October 1941 Russian spy Dr. Richard Sorge in Japan informed the Kremlin that the Japanese would attack Pearl Harbor, and the Kremlin informed the U.S. government. Also, in John Toland’s INFAMY, he related that on December 2, 1941, Captain Johan Ranneft, the Dutch naval Attache in Washington was “informed by U.S. Naval Intelligence that two Japanese carriers are proceeding east and are now about halfway between Japan and Hawaii. On December 6, Ranneft again visited the Office of Naval Intelligence and asked where the two Japanese carriers were. An officer put his finger on the wall chart some 300-400 miles northwest of Honolulu. Ranneft reported all this to his ambassador and to his superiors in London.”

Finally, when I was in the federal government in Washington, DC, I worked with Daryl Borgquist, who later wrote “Advance Warning? The Red Cross” (NAVAL HISTORY, May/June 1999), in which he quotes from a September 5, 1995 letter to President Bill Clinton from Helen E. Hamman, the daughter of Don C. Smith who directed the War Service for the Red Cross before World War II and was deputy administrator of services to the Armed Forces from 1942 to 1946. Ms. Hamman’s letter to President Clinton concerns her father, and states: “Shortly before the attack in 1941, President Roosevelt called him (Smith) to the White House for a meeting concerning a Top Secret matter. At this meeting the President advised my father that his intelligence staff had informed him of a pending attack on Pearl Harbor by the Japanese.”

The American people have been given the impression of President Franklin Roosevelt (FDR) as a heroic figure. However, in Jack Anderson’s nationally syndicated column of June 19, 1961, he refers to newly declassified State Department documents showing that in a December 1, 1943 secret meeting with Soviet dictator Joseph Stalin, FDR informed Stalin that at the end of World War II, FDR would let the dictator have Poland, Latvia, Lithuania and Estonia. And relevant to the many Jews killed by the Nazis at Auschwitz and elsewhere , FDR had another meeting with Stalin on February 4-11, 1945 and was asked if he intended to make any concessions to the King of Saudi Arabia. According to Secretary of State Edward Stettinius, “The President replied that there was only one concession he thought he might offer, and that was to give him the 6 million Jews in the United States!”