Please Help Me Stop This – Time-Sensitive

Most days I am sickened by the actions of our government and its various (most unconstitutional) alphabet soup agencies. Having been in the trenches full time now for 29 years it’s the same old story.

Congress has created a monster with more strings than a 1,000-gallon pot of spaghetti; they can’t control every department and regulations shoved down our throats. I would ask Americans to remember these words because they matter:

“Another not unimportant consideration is that the powers of the general government will be, and indeed must be, principally employed upon external objects, such as war, peace, negotiations with foreign powers and foreign commerce. In its internal operations it can touch but few objects, except to introduce regulations beneficial to the commerce, intercourse and other relations, between the states, and to lay taxes for the common good.

“The powers of the states, on the other hand, extend to all objects, which, in the ordinary course of affairs, concern the lives, and liberties, and property of the people, and the internal order, improvement and prosperity of the state.” Joseph Story, Associate Justice, U.S. Supreme Court, said in Commentaries on the Constitution, 1833

In order to get around the U.S. Constitution, over the past century or so, devious, crooked, corrupt political whores in Congress have used treaties to stomp on states rights. When you have the time, please read the three-part series below by constitutional attorney, Larry Becraft.

Larry gets right to the point and it will help Americans – AND state legislators – understand how things got to be the way they are with agencies like the US Fish & Wildlife Service and USDA. This is so important when it comes to elections and removing congressional incumbents who crap on the Constitution everyday and getting constitutionalists elected to the state capitols who will stand up and fight the monster in DC.

For at least the past 40 years I have not purchased any products – especially cosmetics – that use animals to test their products. God, some of the pictures I’ve seen make me sick inside. Spraying hair spray into the eyes of a little bunny rabbit to see how it reacts. Sick.

I know, medical researchers say they can’t find cures for things like cancer without torturing animals. After spending a lot of time researching all this, I’m not so sure but that’s for another column.

As regular readers know, I am one of those who tries to eat natural and clean and use plants and herbs God put on this earth that have kept mankind alive longer than big pharmaceutical companies.

Certainly, and I’m the first to admit, there are some diseases I’m not sure can be cured either way but one thing I do know – people do not need a pill for every little ache, pain, rash or even allergies. It does take time and some experimentation but worth it in finding ways to use our NATURAL IMMUNE system to fight off disease and infections.

Never had one, never will:

Surgeons Admit That Mammography Is Outdated and Harmful to Women

Now to the feds:

“In the letter, Bishop said hundreds of kittens are bred, fed parasite-infected raw meat for two to three weeks and then killed by “incineration.” Bishop said the USDA admits the kittens are healthy at the end of the study.

“I’m shocked and disturbed that for decades the USDA—the very organization charged with enforcing animal welfare laws—has been unnecessarily killing hundreds of kittens in expensive and inefficient lab experiments,” Bishop said in a written statement. “Any government research program like this one that’s been funded since the Nixon administration needs to be put under the microscope, especially when it involves using kittens as disposable test tubes in harmful tests that most taxpayers oppose.”

“His letter calls for an investigation into the program and questions why the kittens are killed instead of being offered for adoption.”

America’s culture of death strikes again. And, you can bet the civil service employees responsible for burning to death those healthy little kittens will not lose their jobs; likely they’ll get promoted down the line.

Now, the latest and I ask you, please if you agree with me, make your voice heard.

I know I’m going to get nasty emails about this but it makes me sick. Yes, individuals absolutely have the right to hunt in this country. Both males and females love to go out and shoot animals for fun. While I find it repugnant, it is their right under rules and regulations set by their state governments or Congress on federal lands.

I know hunters all over the country shoot, either by rifle or bow & arrow, deer. That would be male deer with big racks; some for sport, others for food. My dogs eat a prescription only dog food of venison and potato. NO fillers of any kind and not made by commies in China. Venison is the easiest for canine digestive systems; my Tibetan Mastiff has a sensitive tummy. 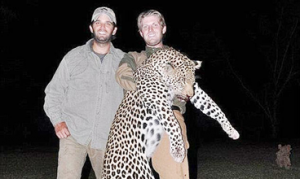 Venison is a legitimate food source just like cattle, bison, pigs and chickens. Responsible free-range ranchers use humane methods as much as is possible to put them down.

I absolutely abhor so-called ‘trophy hunting’. Killing beautiful lions, tigers, leopards, elephants and other creatures just for the sake of sport killing. Big money over in Africa and much done illegally here in the U.S. for big bucks. I voted for President Trump, not his sons. Thankfully, President Trump is not a hunter. 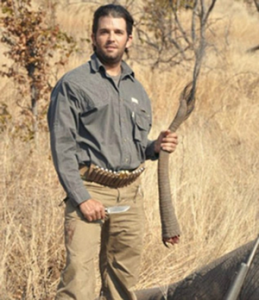 Now, mother bears and wolves and their cubs are to be slaughtered without a chance to even fight back:

“The Trump administration is moving to reverse Obama-era rules barring hunters on some public lands in Alaska from baiting brown bears with bacon and doughnuts and using spotlights to shoot mother black bears and cubs hibernating in their dens.

“The National Park Service issued a notice Monday of its intent to amend regulations for sport hunting and trapping in national preserves to bring the federal rules in line with Alaska state law.

“Under the proposed changes, hunters would also be allowed to hunt black bears with dogs, kill wolves and pups in their dens, and use motor boats to shoot swimming caribou…

“Expanding hunting rights on federal lands has been a priority for Interior Secretary Ryan Zinke, a former Montana congressman who displays a taxidermied bear in his Washington office along with mounted heads from a bison and an elk.

“The Obama-era restrictions on hunting on federal lands in Alaska were challenged by Safari Club International, a group that promotes big-game hunting.

“The Associated Press reported in March that Zinke had appointed a board loaded with trophy hunters to advise him on conserving threatened and endangered wildlife, including members of the Safari Club.”

Why the hell do you have to shoot a mother bear and her cubs in dens while they’re asleep or she might be nursing? For frickin’ sport? The same for wolves. What kind of big, macho man or female has to shoot a caribou swimming? That’s sport? I’ve seen ‘hunters’ shooting wolves from helicopters up in Alaska. That’s sport?

I’m sorry, but it’s not sport to me. It’s simply slaughtering them for no good reason other than to brag and maybe put their heads up on some wall. But mothers and their babies? Come on.

I’m not talking about killing a predator wolf, mountain lion or bear going after livestock or a human. It’s a given you have the right to protect your livestock, employees and your family.

When the page comes up, you can do as I did: “I am vehemently opposed to allowing the slaughter of mother bears and wolves and their cubs – in their dens, for God’s sake.

“The same applies to the slaughter of allowing jerks to kill caribou swimming. Big macho men. It’s not sport, it’s simply killing for the fun of it. Not for food but to get their rocks off. Leave existing rules and restrictions in place.”

As for the State of Alaska and their hunting rules, you can let them know how you feel about visiting their state and tourist dollars.

Sadly, grizzlies are now to be slaughtered in the Yellowstone area despite more than 185,000 objections logged in:

“Allowing a trophy hunt of these majestic animals ‒ the second-slowest mammal to reproduce in North America ‒ so soon after they lost Endangered Species protections does nothing to build public confidence in state management of grizzly bears.”

“Killing grizzlies for fun, when there is ample scientific evidence that the population is not growing, food sources have already been diminished, and the further effects of climate change is unknown, is preposterous,” added nature photographer Tom Mangelsen said.”

And, one more that needs immediate action from the ASPCA:

“The U.S. House Agriculture Committee has approved the addition of dangerous language to the Farm Bill that, if passed, could destroy hundreds—if not thousands—of important animal-protection laws. We can’t let this happen.

“The King Provision (named for its author, Rep. Steve King of Iowa) would strip state and local governments of the ability to pass and enforce laws affecting “agricultural products”—a term so broad that it includes not only farm animals like cows and pigs, but even dogs in puppy mills. Laws against cruel gestation crates, battery cages, and even bans on horse slaughter and eating dogs and cats could all be eliminated.

“This is clear overreach of federal power. In addition to the threat to existing laws, states and towns would be forbidden from passing new laws to protect animals.

“The Farm Bill could receive a vote by the full U.S. House at any time, which means it’s critical that your representative hear from you immediately.

“The most important thing you can do right now is place a quick, polite phone call to your U.S. representative. Simply leave a message with your name, address and a short message stating that as a constituent you urge (your Congress critter’s name) to oppose the King Provision in the Farm Bill.”

It only takes a few minutes to call and get your message across. If you can’t get through to their DC office call your reps district office. The ASPCA is right: Congress has NO legislative authority in this area, period.