“Let us commend Moore as he now moves on to the unusual general election in December occasioned by the confirmation of former Sen. Jeff Sessions as U.S. Attorney General,” Snyder added. The former National Rifle Association (NRA) official has been named the “dean” of Washington gun lobbyists by  the Washington Post and New York Times 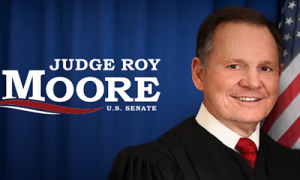 Snyder said that, “Hopefully, Moore’s success is an indication that America is waking up, is fed up with the Satanic immorality put forth as politically correct by many of the powers that be, and ready to deep-six that nefarious gang.”

“Moore, now 70,” Snyder pointed out, “has been known for years as a champion of traditionally solid moral values.”

“During the campaign, Moore said, ‘our foundation has been shaken.  Crime, corruption, immorality, abortion, sodomy, sexual perversion sweeps our land.  When we become one nation under God again, when liberty and justice for all reigns across our land, we will be truly good again.'”

“Moore has been persecuted for his support of traditional Judaeo-Christian values,” Snyder recalled.  “He has been removed as Alabama chief justice twice, once for refusing to remove a monument to the Ten Commandments from the state hall of justice, and, a second time for telling local officials to ignore the U. S. Supreme Court ruling favorable to same-sex marriage.  He seems four-square in his commitment to what public officials and others should be committed.”

“In addition,” said Snyder, “Judge Moore is an avid supporter of Second Amendment values.  He opposes bans on semiautomatic firearms and high-capacity magazines, and an expansion of background checks.  He sees that as a backdoor attempt at gun registration.  He supports national reciprocity for the carrying of concealed firearms by individuals with state OKs to do so.

“It will take time, effort and treasure to clean up the mess in Washington and the rest of the country.  The election of Judge Moore to the U.S. Senate in Alabama’s special election in December could be a giant step in that direction.”

“For some time now observers and relevant experts generally have agreed that between 80 and 100 million people own about 300 million rifles, shotguns and handguns. In the last several years, though, FBI national instant criminal records checks indicate tens of millions of Americans purchase tens of millions of firearms each year,” notes the former editor for the National Rifle Association’s (NRA’s) magazines.

That means more and more Americans are buying more and more guns.  According to at least one expert mathematical estimate, there now are between 412 and 660 hundred million firearms in private hands in the United States (http://weaponsman.com/?p=33875).

Snyder also quoted figures from a national poll service: “A recent Pew Research Center study on ‘America’s Complex Relationship With Guns,’ shows that household gun ownership is up seven percentage points over the last two years to 44%, and that most gun owners cite protection as a major reason for owning a gun.  The figures are 67% for protection, 38% for hunting, 30% for sport shooting, 13% as part of a gun collection, and 8% for their job.”

Snyder stated, “Citizen firearms possession has the support of many in the law enforcement community.  Some high-profile law enforcement executive officers even advocate personal civilian firearms ownership.  At least one of them, Sheriff Wayne Ivey, the chief law enforcement officer in Brevard County, Florida, states that each citizen should acquire a handgun, learn how to use it, get a permit to carry a concealed firearm, and carry it at all times.”

A report from the Crime Prevention Research Center indicates that nearly two million more Americans obtained their concealed carry permits last year, setting a new record for the fourth year in a row.  CPRC says 16.3 million U.S. citizens have CCW permits, up from 4.5 million just a decade ago.

A practicing Catholic, Snyder has been named “a champion of the right of self-defense” by the Washington Times, the “gun dean” by Human Events, and “the senior rights activist in Washington” by Shotgun News.

He holds AB and MA degrees in government from Georgetown University.  He has been an NRA magazine editor and official of the Citizens Committee for the Right to Keep and Bear Arms and Second Amendment Foundation.  He directs Telum Associates, LL.C, and serves on the boards of the National Association of Chiefs of Police, Council for America, and American Federation of Police and Concerned Citizens.