We don’t believe there is a functional conservative party in this country, and we certainly don’t think the Republican Party is that. Stephen Bannon

You don’t come to us for warm and fuzzy.  We think of ourselves as violently anti-establishment, particularly “anti” the permanent political class.  We say Paul Ryan was grown in a petri dish at the Heritage Foundation.  Steve Bannon, in early 2016 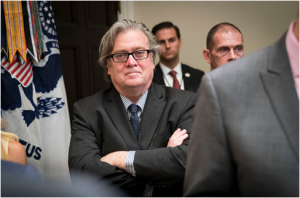 The Loss Of Steve Bannon

Bannon’s above quotes are absolutely true, and his loss will be felt, but he did promise only a year.  He said that his departure was voluntary, and that he’d planned it to coincide with the one-year anniversary of his joining the Trump campaign as chief executive, on August 14, 2016.

“On August 7th, I talked to Chief of Staff John Kelly and to the President, and I told them that my resignation would be effective the following Monday, on the 14th,” he said. “I’d always planned on spending one year. General Kelly has brought in a great new system, but I said it would be best. I want to get back to Breitbart.”

The only reason it was delayed until Friday the 18th was because of the Charlottesville riots.

Bannon said he would continue waging a war against Trump’s enemies and would do all he can to help the President stay on track and keep his promises.  That could put Jared Kushner and Ivanka Trump, chief economic adviser Gary Cohn, national security adviser H.R. McMaster, House Speaker Paul Ryan and Senator Majority leader Mitch McConnell all firmly in his crosshairs.

Geller wrote that Bannon may have resigned, but that it was clear that John Kelly made Bannon’s remaining time in the West Wing very short.  Kelly said Bannon was a disruptive force and a source of leaks aimed at undermining his rivals.  One of those rivals, with whom Kelly is deeply in sympathy, is National Security Adviser H. R. McMaster, who clashed forcefully with Bannon over such policies as strategy for the war in Afghanistan.

Bannon co-authored Trump’s inaugural address where the President spoke of self-dealing Washington politicians and their policies that led to the shuttered factories and broken lives of what he called, “American carnage.”  Apparently that great speech was even watered down by moderates Ivanka and Jared.

Here’s the big problem.  Chief of Staff Kelly, who was appointed July 28, immediately brought a previously unseen degree of his form of discipline and process to the West Wing. Kelly quickly established himself by exercising tight control over Trump’s access to information and personnel, ensuring control of the latter by instituting a strict closed door policy in the Oval office.

So, who and what is Kelly keeping from our President?

In a Daily Caller article, Bannon stated that the days of Ivanka crying to her father are over.  She wanted him to appeal to moderates, which as a Democrat isn’t surprising, especially since she’s good friends with Chelsea Clinton, Huma Abedin, and Dina Powell. Bannon told her and Jared that those very moderates hate the mention of Trump’s name.  He said to appeal to moderates would cause the loss of the populist base who elected Trump, and he was right.

In Roger Stone’s article in the Daily Caller, he said this, “It is more in sadness than in anger that I conclude that Steve Bannon has failed to look out for the Trump constituency, while establishment ‘never Trumpers’ line up for cushy jobs and prestigious ambassadorships. Not understanding that ‘personnel is policy,’ Bannon refused to fight for any of his allies or those who helped get Trump elected. It’s as if Steve felt the grubby business of patronage was below him.”

I didn’t know that Steve was responsible for getting other true conservatives hired, but surely other people got calls and emails as well.  And yes, there are definitely a great number of wonderful people out here in America who worked themselves silly to get Trump elected.  Many of those people have resumes that would actually over-qualify them for working in any number of departments in the administration.  So, if this is true, why didn’t he listen to the calls?  And the bigger question is why is no one else listening to calls?

Cabal Of The Generals

Roger Stone calls McMaster, Mattis and Kelly the Cabal and the Seven Days in May crew, and says they are now very much in control.  He says McMaster is in alliance with White House Chief, John Kelly who reminds him very much of Alexander Haig.  He believes they are aligned with Mad Dog Mattis, the first non-civilian Defense Secretary in modern times. [Link]

Peter R. Mansoor, a retired Army colonel who served with McMaster in Iraq during the 2007 surge of U.S. troops, said that McMaster “absolutely does not view Islam as the enemy.”  And that is why he needs to be ousted yesterday.

Stone says the generals are globalists and internationalists and were responsible for the ouster of Scaramucci, whose only sin was immediate access to the President.  Kelly is now controlling access and information to the President which didn’t exist under Priebus.

The generals wanted Bannon ousted, and Stone says that he was standing alone because he didn’t hire others who were like minded.  Yet, Bannon was the prime mover in the appointment of Rex Tillerson, whose chief patron was CFR member Condoleezza Rice, and Rice had recommended Tillerson in a face to face meeting with Trump in New York.  And why is the pressure to remove Soros people from embassies across Eastern Europe ignored in the Tillerson state department?

Stone also claims Bannon didn’t tell the President that Joe Arpaio was being unfairly prosecuted.  According to Stone, Bannon also came up with a higher tax proposal which would be a disaster for the Trump economic revolution.

Nevertheless, the generals have removed Bannon for the same reason they removed Scaramucci, because of their independent access to the President. 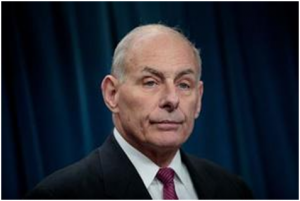 Roger says these generals, who are aligned with the Mueller gang and James Comey, and the permanent two-party globalist establishment have a slow-motion coup afoot.   They intend to seize control of all information and render the President impotent for a takedown by the executioners, a la Seven Days in May.

Now Kelly is looking to the Leon Panetta model with Clinton for dealing with Trump. Link  John Kelly was senior military assistant to the secretary of defense when President Barack Obama tapped Leon Panetta to take over the Pentagon.

Maggie Haberman of the NY Times reported that in an interview with the American Prospect, which Bannon thought was off the record, and said wasn’t even an interview, he mocked his colleagues and contradicted Trump’s tough threats towards North Korea.  He said, “There’s no military solution here, they got us.”  Privately, Steve seemed to be provoking our President, and yet, there isn’t an option that is comfortable, is there?  After more than two decades of our leaders mollifying this commie regime, it has only gotten worse, and Trump is handed the resulting mess.

Bannon joins the long list of those who are no longer with Trump, and the three I loved the most were General Flynn, Steve Bannon, and Jeff Sessions, the latter of whom should be far more of a vicious attack dog than he seems to be, and is disappointing a lot of deplorables.  Many of us wish Trump had installed Rudy Giuliani as AG instead because Rudy had the chutzpah to go after the mob and that takes mettle.

Look, Bannon had a falling out with many of the following people, and Bannon was right about many of the insider enemies, especially that mess in the NSA. [Link]

The Latest From Breitbart

Breitbart has said that Bannon was not just Trump’s master strategist, but he actually turned around a failing campaign in August of 2016.  And of course, Bannon was the hardcore conservative spine of the administration.  He actually had a “whiteboard” in the West Wing listing the promises Trump made to the voters, and Bannon was determined to check as many of them off as possible.

Steve was no political climber, so he was able to always deliver totally honest advice and criticism to our President.  He reportedly told Trump that firing FBI Director James Comey would be more trouble than it was worth, and boy was he right about that.  Look at the resulting Mueller mess.

Trump railed against U.S. troop engagement in Afghanistan as a candidate promising to end expensive foreign intervention and nation-building. And he had two high level officials in his administration who agreed with him who are now gone. Yet, Breitbart reported that the President’s Afghanistan speech was received with a chorus of cheers.

It was during a security council meeting about Afghanistan that Trump changed his original stance. If you ask his supporters if they want more troops in Afghanistan, eighty percent would say they don’t.  The media are used to dealing with sheep, but Trump supporters aren’t sheep, and sending more soldiers to die in the Middle East is not what they want.  Analysts suggest the “new strategy” is only an extension of the failed status quo.

Bannon Can Do More At Breitbart

If Trump went to a rally and announced Bannon’s dismissal, he would get booed. Bannon may be out of the White House but don’t think he’s still not in the fight.  Corey Lewandowski was fired under similar dubious circumstances only to find out he was doing undercover work for Trump at CNN.

Bannon may help Trump more on the outside than in the administration, but only time will tell.  Trump still holds meetings with former campaign hands Corey Lewandowski and David Bossie, and still occasionally reaches out to Roger Stone. There’s no reason he won’t use Bannon as an outside barometer as well, and Bannon could be more effective from that unaccountable post than he was from within the inner circle.

Halsey English ripped off a quick note about White House Chief Strategist Steve Bannon’s dismissal being the beginning of something bigger.  Orange County GOP Representative and Trump supporter, Dana Rohrabacher, met with WikiLeaks founder and fugitive Julian Assange, with information that Rohrabacher feels may be worthy of a presidential pardon.  He released some of the details of the meeting, and said he was returning to Washington to tell President Trump the rest of the details face to face. Is there a chance Democrats are going to be exposed?  Let’s hope so.

I don’t know how to decipher his parting statement, but good luck Steve, we’re sorry to see you go.