With the so-called Trump-Russian Collaboration Case being investigated by a team of buffoonish attorneys under the commander of an Independent Counselor named Robert Mueller — whose own background is questionable at best, suspiciously unlawful at worst – the nation’s mass media appears to have already found a new allegation that would lead to President Trump’s impeachment.

Television viewers, radio listeners, Internet surfers and newspaper readers are being bombarded with the name and face of former “adult film star” Stormy Daniels who is alleged to have had a love tryst with real estate magnate Donald Trump before her even pondered a run for the presidency.

As shown on Thursday night’s edition of The Hannity Show on Fox News Channel, every news anchor’s and reporter’s on CNN, MSNBC, ABC, CBS, NBC and others are ignoring the latest revelations regarding possible criminal activity by the Democratic Party’ and the Deep State — and also ignoring the fake Mueller investigation – to zero on a salacious and irrelevant allegation by a woman against a powerful man. 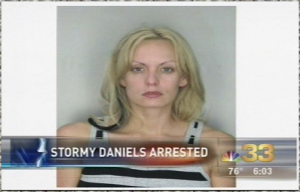 “Had only this batch of half-assed journalists covered the [Bill] Clinton White House complete with the rape, sexual assaults, harassment and other hanky panky money-deals, pay-for-play schemes and witness intimidation. Maybe the Beltway Swamp would have been easier to drain,” said former police detective Wallace McWright in New York.

Of all the major news and commentary shows aired on Thursday, the popular talk radio team of Curtis & Cosby aired weekdays on WABC Radio in New York City covered the Stormy-Trump story with integrity, fairness and veracity. Co-host Curtis Sliwa is the founder and director of The Guardian Angels, a group of teenagers and young adults who volunteered to help police in their quest to reduce violence and injustice. Meanwhile, Rita Cosby, an Emmy-Award winning newswoman best known for her years with Fox News Channel and CNN, has added her own interviewing skills and news-gathering prowess to complete a show that entertaining and information.

On Thursday, March 22, 2018, David Schwartz, the attorney for Michael Cohen, President Trump’s personal attorney, reacted to John Dowd leaving the Trump legal team, and revealed like Dowd has said, he too would advise Trump NOT to testify in the Robert Mueller investigation. Schwartz said quote, “I would try to avoid him testifying. I would try to block that testimony under oath.”

He also responded to comments made by Stormy Daniels’ attorney Michael Avenatti on CNN this morning claiming that Trump’s legal team, led by Cohen, is engaging in thuggish behavior and threats. Schwartz said quote “This Avenatti really uses term threat very loosely… if you consider speaking and negotiating with other attorneys a threat. Like that’s somehow a threat then I feel really sorry for Avenatti.”

Schwartz also revealed Cohen has never spoken to Stormy, only through her attorney. Schwartz said quote, “The only contact Michael Cohen has had is through counsel.”

Schwartz called Stormy’s current attorney Avenatti “effective,” but said he is confident Cohen will be victorious in his suit against her for violating her non-disclosure agreement. “He is trying to make lemonade out of lemons. But he’s case is a lemon and he’s gonna go down on this case… Hundred percent confident that EC LLC will win.”

***Schwartz made the above comments during a live interview today at 1pm ET on “Curtis and Cosby” on WABC Radio.

The FULL AUDIO of the Interview is in this LINK

VERBATIM SEGMENTS ARE BELOW

15:18  SCWHARTZ:  You know I’ve been honored to have gotten those calls in the past from time to time. I would try to avoid him testifying. I would try to block that testimony under oath. I would, you know, certainly go for like his attorneys are trying to push which is the informal interview. Nothing under oath and I would shoot for that for sure.

Response To Being Called Thuggish

5:07  SCWHARTZ:  This Avenatti really uses the term threat very loosely, so I don’t know. Curtis we know your background. I’m from Brooklyn myself, and if you consider speaking and negotiating with other attorneys a threat. Like that’s somehow a threat then I feel really sorry for Avenatti if he considers that a threat. Michael Cohen has never spoken to Stormy, or whatever her name is Daniels. He’s never spoken to her, never emailed her, never communicated with her. Never had any contact with Stormy Daniels what so ever. The only contact Michael Cohen has had is through counsel. That’s the right way to handle legal disputes is when the two lawyers speak to each other. I don’t know what kind of threats that Michael Avenatti is referring to.

Confident They Will Win

16:40 DAVID SCHWARTZ:  Well, he’s effective. I can’t say he’s not effective. His tactics are go to the court of public opinion. He’s built up some social media following. I can’t believe, it’s all these people that want to see the President out of office. So, he’s very effective, let’s put it that way. He is trying to make lemonade out of lemons. But he’s case is a lemon and he’s gonna go down on this case. Because you know, to say this nondisclosure agreement is invalid, I don’t see any legal argument what so ever that will prevail… that this is an invalid agreement. This is an excellent agreement. She signed it. She entered into an NDA. She received the 130 thousand dollars. She has to abide by the terms of this agreement.

The FULL AUDIO of the Interview is in this LINK.