Under the First Amendment, the pastor has the right to determine what is said from the pulpit, not the IRS —David Fiorazo

As long as it is supported by Democratic politicians and by liberal Hollywood players, censorship is a useful tool to stifle dissent. —Andrew Breitbart

If I get elected president, one of the early things, one of the absolute first things I’m going to do is work on totally knocking out the Johnson Amendment.” —Mr. Trump told Christian leaders during his campaign.

I was nine years old when LBJ shoved this rotten unconstitutional law through the Senate, and he did it strictly to silence those against him.  Our new President has removed the muzzle from our clergy after 60 years of censorship.  The pulpits are weak, and have been for years, but maybe this will give them the impetus to have a bit of the courage and spine our clergy had during the revolutionary war.

Throughout all my adult years, I’ve never seen any church assailed by the IRS for endorsing democrat politicians, but speak from the pulpit about conservative politicians, and the IRS is right there.

The 1954 Johnson Amendment is the unconstitutional law which restricted American clergy’s ability to speak about political candidates from their pulpits. It was an amendment to the tax-exempt status (501c3) which stated that if clergy preached politics from the pulpit, they could lose their 501c3 exemption. 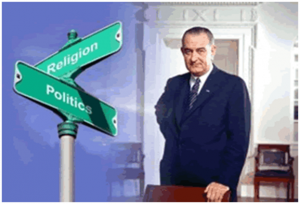 Texas Democrat, Lyndon Baines Johnson, was a powerful politician running for reelection as Senator, but two anti-communist, tax-exempt groups were opposing him and passing out literature during the campaigns. He was the Senate minority leader at the time, and of course, was the “accidental” president who got us into the Vietnam War, then prevented us from winning.

Johnson contacted the IRS and found the group’s activity was legal, so he sought other options to fight them. He offered his unconstitutional amendment to a pending, massive, tax code overhaul bill, and records indicate an absence of committee hearings on the amendment.  There was never any legislative analysis as to the effect of this bill, and it was purely and simply created by LBJ to protect LBJ.

Again, the 1954 Johnson Amendment, passed by Congress, stated that non-profits, Christian churches and organizations, could not speak in favor of any political candidate despite the prohibition stated in the First Amendment of our Bill of Rights.  In effect, this law allowed the government to strip churches or charities of their nonprofit status if they got involved in politics.  The amendment has been used as a club to beat clergy into silence ever since, and very few churches chose to go without the tax exemption.

This illicit legislation paved the way for the increased suppression of free speech, and because of the confusion and misinformation about the law, many religious leaders have been unnecessarily self-censoring for over six decades. They are not only censoring themselves on political candidates, but on any political subject matter.

Because of their fear of the IRS, and their misunderstanding of the actual illegal amendment, the pulpits have literally shut down their comments on anything happening in society via local, state or federal politics. They are absolutely frozen in fear when it comes to talking about the Bible as it relates to cultural, political, fiscal, and social issues, which all fall under the category of moral issues, something God’s Word clearly defines.

Trump Works to Keep His Promise

Our President signed the order “asking” the IRS to use “maximum enforcement discretion” over the enforced regulation in the Johnson Amendment.  The order directs the IRS simply to not enforce that provision, which is valid, but the entire law should not be enforced.  Trump said, “Freedom is not a gift from government, it is a gift from God, and we’re giving our churches their voices back.”

“This financial threat against the faith community is over,” Trump said. “No one should be censoring sermons or targeting pastors.”  He is right; it is unconstitutional.

The order, which also affects non-profits, promises “regulatory relief” for groups with religious objections to the preventive services requirement in the Affordable Care Act, according to a White House official. Those requirements include covering birth control and the move could apply to religious groups like the Little Sisters of the Poor, who have moral objections to paying for contraception.  [Link]

Trump promised to “totally destroy” the law prohibiting the political activities when he spoke in February at the National Prayer Breakfast, but some believe fully abolishing the regulation could take an act of Congress.  Why?  Because this was a bill passed by Congress, and Congress has not obeyed the Constitution for multiple decades.

It should be remembered that the Constitution does not empower the President to selectively enforce only laws which he approves. If Americans accept this principle, then they are accepting the substance of dictatorship.  However, in this case, the President should instruct all executive agencies to ignore this unconstitutional law.

The globalist Republicans in Congress hate our President, but they are the ones who should know this is an unconstitutional amendment.  Most politicians, both left and right, probably have no desire to undo Johnson’s self-serving law, as it also protects them!

Republican lawmakers in the House and Senate rolled out legislation in February of this year to repeal the “Johnson Amendment.”  It is called the “Free Speech Fairness Act.” The legislation was introduced in the House by Majority Whip Steve Scalise (R-La.) and Rep. Jody Hice (R-Ga.), and in the Senate by Sen. James Lankford (R-Okla.).

Their bill fixes but does not repeal the Johnson Amendment, and it applies to all 501c3 entities, not just churches.  They claim this bill is the first step in getting congress to fix what it created in 1954.  They also claim this Act is needed to protect the constitutional freedoms of pastors and churches.

The legislation comes after President Trump vowed to repeal the Johnson Amendment during his presidential campaign and reiterated that pledge during the National Prayer Breakfast, and he has now signed the executive order restricting the IRS from enforcing the Johnson Amendment.

One has to wonder if any of America’s politicians have even read our Constitution.  I asked my friend Publius Huldah about our President’s Executive Order, and this is what she said:

What we have is an unconstitutional act of Congress addressed by an Executive Order.  Congress has no Constitutional authority to say who can and who can’t endorse candidates for office.  Restricting political speech is not one of the enumerated powers; and furthermore, it is prohibited by the First Amendment.

The Johnson amendment is totally unconstitutional as outside the scope of powers delegated and is in violation of the First Amendment.

So, what is a President to do?  Order the executive agencies to ignore the unconstitutional pretended law.

We must be vigilant, and we must be the catalysts who help our President destroy this unconstitutional censoring, especially of our clergy.  As such, I am again listing the contacts for our representatives.  Even when they don’t want to listen, even when the aids lie to us, (and they do) even when they have their own agendas, when we pound them with enough calls and emails, they do cave.  We’ve overloaded the capitol hill phone lines before, let’s do it again! Use the Constitutional truth from Publius and get it to your reps and to our President.

Bottom line folks, it’s up to “we the people” to take part in making America great again.

P.S.  Dear readers…the writers for NewsWithViews are working to save America from a globalist one world order cabal, and we know many of these enemies occupy seats in Congress.  The publisher of NWVs escaped the communist country of Slovenia when he was a child.  He so understands the dangers our country faces, and this is why his heart, his time, and his funds go into this website…all to save his beloved adopted country of America.  We work daily to bring you truth you cannot get from the main stream media.  Please help us keep NWVs up and running.  Any donations, large or small will help and can be sent here.