Home/January 2021, Opinions/President Trump – The Lion Must Triumph to Save the Republic!

President Trump – The Lion Must Triumph to Save the Republic!

President Donald J. Trump has presented to the American people the numerous methods employed to commit massive voter fraud in the 2020 presidential election in an address to the nation on December 22nd that the mainstream media refuses to acknowledge.

Not only did President Trump predetermine that there would be unprecedented voter fraud in the 2020 presidential election, senile Joe Biden confirmed it in a Freudian slip when he stated that he and the Democrat Party had “put together the most extensive and inclusive voter fraud organization in the history of American politics.” 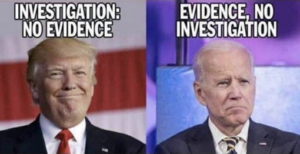 We have been told by the mainstream media, big tech, the Democrats, and spineless RINO Republicans that there is “no evidence” of massive voter fraud and that Joe Biden will be sworn in as the 46th president of the United States on January 20, 2021. This is amusing, particularly coming from the mainstream media that investigated President Trump ceaselessly, without evidence, for Russian collusion, while turning a blind eye to all the evidence of Vice President Joe Biden’s corruption in Ukraine and his (and other Democrats’) collusion and corrupt financial dealings with Ukraine,Russia, and China. 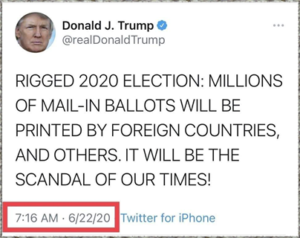 In some cases, the mainstream media and others have modified their stance of saying there has been “no voter fraud,” to “there has not been enough voter fraud to alter the outcome of the election.” Hmm… Remember to tell your children to lie on their resumes and cheat on their job application tests, and, if they get caught cheating, simply tell their prospective employer, “Yes, I lied and cheated to attain this position, but it was not enough to alter my qualifications for this job!”

The mainstream media is no longer reporting news and hasn’t been for quite some time. They now are merely a propaganda arm of their Democrat overlords that spin narratives to the American public. Many Americans are awake to this, but sadly many are asleep.

The Democrat Party knows it cannot win elections. For decades the Democrats have been crying “voter suppression! Black people cannot produce an ID card when they go to vote, and if you require them to do so, you are disenfranchising them!” A foreigner visiting the United States, based on Democrats’ cries of voter suppression, would think that there are white-hooded KKK members at America’s polling places chasing away black voters and / or black people generally do not possess any forms of identification. 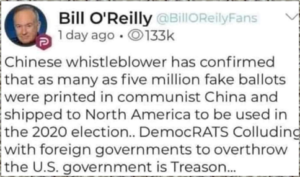 The decades long façade of voter suppression segued perfectly into the rationale for mail-in ballots for Democrats in 2020, when they used their nuclear option to attempt to bring down President Trump by panicking the American public with doomsday scenarios of deaths in the street, unless all states accepted mail-in voter ballots to prevent the spread of coronavirus.

We have been told by the mainstream media, big tech, the Democrats, and spineless RINO Republicans that President Trump is desperate, that he has lost all his court cases, most notably the U.S. Supreme Court’s decision to not hear a case brought up by the state of Texas, joined by 17 other states, against the battleground states of Georgia, Michigan, Pennsylvania, and Wisconsin, claiming that these states violated election law, which led to a fraudulent Biden victory in those battleground states, which thereby affected and disenfranchised the people of the state of Texas and the other states which duly and lawfully elected President Trump.

The U.S. Supreme Court, in refusing to hear the Texas case on behalf of President Trump, stated that Texas did not have “standing” to take the state of Georgia to court. This is simply NOT TRUE.It has been claimed that Chief Justice Roberts may have been compromised and threatened, because he is on Jeffrey Epstein’s private jet flight logs. Roberts was allegedly heard screaming through the walls of the Supreme Court, telling the other Supreme Court Justices to refuse the Texas case, saying, “I don’t give a f@#% about ‘Bush v. Gore’ … at that time we didn’t have riots.” 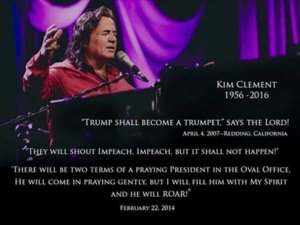 Conservatives, Constitutionalists, Republicans, and real Americans have got to stop attempting to reason with mindless, soulless Democrats, take the gloves off, and reclaim the republic. Enough games. Let’s stop pretending that we can reason with people who think abortion is not murder, that two men or two women can be married, and gender is changeable. If Democrats think killing babies to thin the human herd is acceptable, is it any wonder why five Democrat governors would place COVID-infected patients in elderly nursing homes? Any wonder why hydroxychloroquine is a virtually banned treatment for COVID? Democrats, if they have their way, will regulate how long people are allowed to live, as in the sci-fi movie Logan’s Run.

With your typical,emotional-minded,amoral Democrat, they simply do not care about evidence that goes against their cause. Call it evidence nullification or suppression, but with many Democrats it is style or symbolism over substance and that is all that matters to them. When Rudy Giuliani presented evidence upon evidence of massive voter fraud including statements from hundreds of eye witnesses coming forward willing to testify about the voter fraud they had seen under the threat of perjury, the reaction from the godless establishment media was, “What evidence? Giuliani’s hair dye is running down the sides of his face!”

Mail-in ballot fraud (including dead, multi-state, out of state, and unregistered voters, unfolded alleged mail-in ballot sheets fed multiple times into voting machines by Democrat poll worker operatives in the dead of night, and truck dumps of Biden only ballots), coupled with Dominion voting machines whose data was accessible via the internet – whose vote tallies were switched from Trump to Biden, and an army of corrupt Democrat politicians and worker bee drones dedicated to cheating to ensure President Trump was defeated, was certainly enough voter fraud to swing the election from President Trump to Joe Biden. Does anyone honestly believe that gaff-ridden Joe Biden, a man who didn’t even bother to campaign, who sat it out in his basement bunker, received far more votes than any president in U.S. history?

“We gave you a Republic, if you can keep it.”
—Benjamin Franklin, Founding Father of the United States

“Freedom is never more than one generation away from extinction.”
—President Ronald Reagan – July 6, 1987

“Today is the fourth of July [SIXTH OF JANUARY]. And you [THE AMERICAN PEOPLE] will once again be fighting for our freedom. … We will not go quietly into the night! We will not vanish without a fight! We’re [FREEDOM IS] going to live on! We’re [THE REPUBLIC IS] going to survive! Today, we celebrate our Independence Day!”
—Independence Day (1996 Sci-fi/Action) – President Whitmore Speech [WITH MODERN DAY APPLICATION] 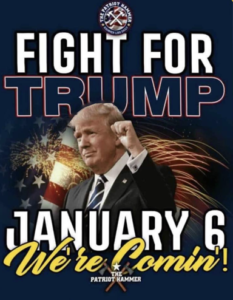 It is not enough that President Trump retains his office. He MUST begin arresting people … for treason. One can only tread in a den of vipers for so long without being bitten and crucified. Just ask Yeshua (Jesus) – Matthew 23:33. President Trump must use all of his resources at his disposal as president, as Abraham Lincoln did before him, to drain and prosecute the swamp. This would include invoking the Insurrection Act and holding public military trials. The Deep State has been committing treasonous crimes with impunity. Now that useless William Barr has resigned as Attorney General, hire a pit bull like Rudy Giuliani or Michael Flynn as your next A.G. and command him to start arresting people and begin holding public trials.

A historic day, comparable to America’s Independence Day of July 4, 1776, is coming on January 6, 2021. On this day our government, with all its check and balances – brilliantly crafted by the nation’s Founding Fathers, will decide if unelected elitists, the msm, big tech, Democrats and their operatives will determine the outcomes of our elections and the fate of our nation via propaganda and voter fraud and for a pretense encourage Americans to vote in predetermined elections, or We The People will stomp out the corruption and massive voter fraud that is plainly evident, maintain voting integrity, and keep our freedoms and our republic intact.

“Listen to the word of the Lord. God says, I will put at your helm for TWO TERMS a president that will pray, but he will not be a praying president when he starts.”
—Kim Clement, President Trump prophecy, February 10, 2007

Joe Biden is a career criminal / politician and puppet of the Deep State and the global elites. President Trump must remain president or the republic will be lost for the foreseeable future. Even if Trump were to run again in 2024, the Deep State will simply rig the election once again and determine the president for us, and it won’t be Donald J. Trump.

This January 6th, I encourage all Americans to take to the streets wearing Trump / MAGA gear, waving flags, with gloves off, declaring in one united voice that our republic will not “move on” and go quietly into the night, and that we will remain a government of the people, by the people, and for the people!

The Lion, Donald Trump, must prevail and triumph. If he does not triumph, freedom loving, constitutional Americans will have to take to the streets to defend themselves from freedom restricting,  unconstitutional edicts, henceforth. Freedom is not free, it must be fought for.

Pray for our president, as the prayer of the righteous avails much – James 5:16.
We have God on our side, and if God is for us, who can stand against us? – Romans 8:31.