A communist is like a crocodile: when it opens its mouth, you cannot tell whether it is trying to smile or preparing to eat you up.  —Winston Churchill 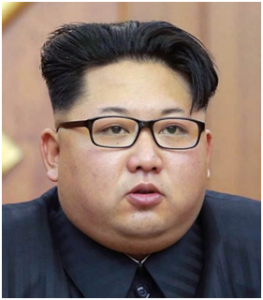 Rocket Man has been a thorn in our President’s side and a worry to many nations.  Both South Korea and Japan (a change to Japan’s Constitution is required) should attain nuclear weapons in order to dissuade the fat little dictator.

One day after Tillerson stated that he was trying to open the door for talks with North Korea while on a trip to China, Trump disputed his efforts, tweeting, “I told Rex Tillerson, our wonderful Secretary of State, that he is wasting his time trying to negotiate with Little Rocket Man.”

President Trump inherited this disaster due to the utter spinelessness, stupidity and culpability of Democrat presidents Clinton and Obama.  It was Clinton who empowered N Korea and it was Obama who ignored N Korea while sanctioning Iran to go nuclear by helping them with the treasonous sum of $150 billion and $400 million in cash. 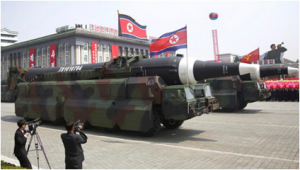 The little fat dictator, Kim Jong un, marches his missiles through the streets of Pyongyang, proud of his military prowess, but oblivious of his starving people.

The fear has always been communist China’s support of N Korea, just as it was in 1950.

The Korean War was 67 years ago.  Korea was ruled by Japan until the Soviet Union liberated the North just weeks before the end of World War II and the region was split into two.  Korea was divided, the North went to Russia, the South to America.

In 1950, Kim II sung, the leader of North Korea, sent his powerful army into South Korea and the United States had to take a stand against Communist aggression.  Truman ordered American naval and air forces to support S Korean ground troops, and asked the UN to approve the use of force to stop the North Korean invasion.

The UN responded quickly to impose military sanctions. The U.S. and 19 other nations committed troops to the area.  Despite heavy losses, the US and combined forces began to win because of MacArthur’s surprise tactics. 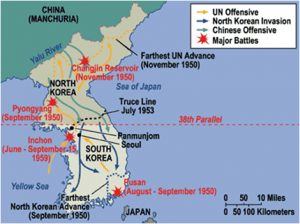 Joint Chiefs Chairman Omar Bradley said that “large-scale amphibious operations will never happen again,” but MacArthur organized one of the largest and most successful amphibious attacks in American military history.  He deployed a huge task force of more than 300 ships carrying nearly 70,000 men to carry out a surprise attack on the port of Inchon, far to the north of the Pusan battle zone.

MacArthur’s gambit to open up a huge new offensive hundreds of miles behind enemy lines caught the North Koreans totally by surprise. The massive invasion force quickly overwhelmed the light defenses left in place by the communists at Inchon.  MacArthur wanted to continue into N Korea and rid them of communism.

The turning point in the Korean War was the decision made to cross the 38th Parallel (the dividing line between North and South) and pursue the retreating enemy into North Korea. At President Truman’s direction, the National Security Council (NSC) staff had studied the question and recommended against crossing the 38th because ejecting the North Koreans from South Korea was a sufficient victory. To this, the Joint Chiefs of Staff (JCS) objected.

MacArthur, they argued, must destroy the North Korean army to prevent a renewal of the aggression. On 11 September—four days before the Inchon Landing—Truman adopted the arguments of the JCS. Truman changed the national objective from saving South Korea to unifying the peninsula. After the UN Assembly passed a resolution on 7 October 1950 calling for unification of Korea, MacArthur was free to send forces into North Korea.  The worry was that China would enter the war and help N Korea, and they did.

Truman ordered MacArthur to Yalu, which is the river running between the border of China and N Korea.  But, in November and December 1950, hundreds of thousands of Chinese troops crossed into North Korea, they had been waiting in hiding.  The field commander captured a few of them and thought there was little resistance.  However, on 27 November 1950, the Chinese 9th Army surprised the US X Corps commanded by Major General Edward Almond at the Chosin Reservoir area. A brutal 17-day battle in freezing weather soon followed.

The Chinese flung themselves against the American lines, driving the U.S. troops back into South Korea. MacArthur said the Chinese attacked and should be rebuffed, but the JCS said that would be getting us into WWIII.

The battle of the Chosin Reservoir pitted 15,000 allied ground troops against 120,000 Chinese infantrymen. The ten Chinese divisions, along with North Korean forces, were on a mission: wipe out the Marines, the Army, and all of the allies.  They nearly did.

The weather was 48 degrees below zero, and Americans were running out of food and ammunition as well as medical supplies. 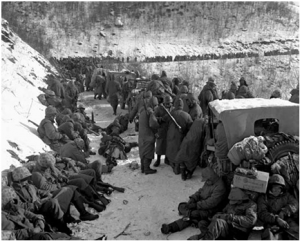 The order finally came to withdraw to the south. But, it was crucial that planes could land and take the most severely wounded out of the battle zone, and the cold was beyond bitter.

“It was looking pretty bleak, because the planes couldn’t fly and the Chinese were closing in,” offers Clyde Queen who said they could hear the screams of the wounded in the night, not knowing which side was screaming.

“One night a cloud opened up and a Marine looked up in the sky and he yelled, ‘Look, a star. A star.’ Then we knew that the planes would fly. We knew that they would be getting out of there. Some Marines think that star was placed there by God as a sign, ‘Don’t give up hope. I haven’t forsaken you.'”

More than 4,000 allied casualties were evacuated from the air strip as the C-119’s dropped rations and ammunition. But, the fight was not over. The remaining troops still had to make their way south to evacuate by ship, and many froze to death getting there. 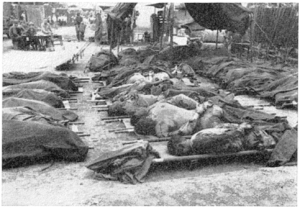 Historians consider the battle of the Chosin Reservoir to be the single most savage battle of modern warfare. And for the chosen few who lived through it, it was an experience they will never forget.  The Arctic cold killed many of them, but they fought on.

MacArthur then asked for permission to bomb communist China bases north of the Yalu and use Nationalist Chinese forces from Taiwan against the People’s Republic of China. Fearing a widening of the war and possible entry of the Soviet Union, Truman flatly refused these requests.

Years after the war, we found out that Stalin wanted no involvement and said Russia was not getting into WWIII over Korea, although he provided material and medical services, as well as Soviet pilots and aircraft, most notably MiG 15 fighter jets, and required Mao Zedong to pay for them. 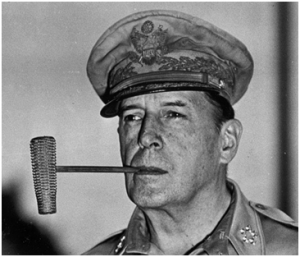 MacArthur was ordered to organize a phased and orderly retreat. On December 29, Truman administration officials informed MacArthur that the United States had abandoned the goal of reunifying Korea, and would seek negotiations.

The JCS limited his reinforcements to replacements, shifted the priority of military production to strengthening NATO forces, and wrote a new directive for MacArthur requiring him to defend in Korea as far to the north as possible.  He was outraged at the thought of going on the strategic defensive and fought against his new directive with all his might. Nevertheless, on 12 January 1951, the JCS sent him the final version of the directive, and the UN coalition had a new war aim designed to bring about a negotiated settlement.  Negotiations for a cease fire took two years while the war raged on until 1953.  The Chinese kept up the attacks, and the loss of American and allied lives kept rising.

Congressman Joseph W. Martin of Massachusetts had written to MacArthur asking for comment on Martin’s thesis that Nationalist Chinese forces “might be employed in a second Asiatic front to relieve the pressure on our forces in Korea.”

MacArthur replied that his own view followed “the conventional pattern of meeting force with counter-force,” that Martin’s suggestion on the use of Chiang Kai-shek’s forces was in consonance with this pattern, and that “there was no substitute for victory.”

Cong. Martin wrote back to him in full agreement.  Here is his letter.

However, Truman and the top military leaders in Washington quickly rejected MacArthur’s victory plan. MacArthur criticized the “politicians in Washington” for refusing to allow him to bomb Chinese bases north of the Yalu River. He did all this in spite of an order from his superiors in Washington not to make any public statements on foreign or military policy without first getting approval from the Department of State or Defense. MacArthur was on a collision course with his commander in chief. Truman was a Democrat and MacArthur a strong conservative Republican.  Back then, we had true constitutional conservatives.

After General MacArthur publicly disagreed with President Truman about whether or not to bomb China, he was fired. Truman believed that bombing China would have led to a much bigger war.

Today, we see countless members of Trump’s administration disagreeing publicly with his policies, yet they remain employed.

Five million soldiers and civilians lost their lives during the war. The Korean peninsula is still divided today.  We know this only too well with the likes of Kim Jong un running the communist North.

Today we are paying the price with an out-of-control dictator in N Korea and a Chinese military built by American free-trade dollars.

Now President Trump is left with this mess in Korea.  Had it been finished in the 1950s, we wouldn’t have a communist China with a US built military who could destroy us, neither would we have a communist N Korean dictator.

“We will have no choice but to totally destroy North Korea,” Trump said. “If the righteous many don’t confront the wicked few, then evil will triumph,” he added, before repeating a nickname he gave Kim on Twitter. “Rocket Man is on a suicide mission for himself.”

However, our President will have to negotiate with China’s Xi Jinping and Rocket Man and therein lies the danger.  This time victory would not be as easy.

“Communism is not love.  Communism is a hammer which we use to crush the enemy.”  Mao Zedong

P.S.  Communism has infiltrated our country and it happened long ago.  Joe McCarthy was absolutely right, and so was Khrushchev when he told us the communists would overtake America and never fire a shot.  One needs only watch CNN and the mainstream networks to see communists at work.  CNN’s Van Jones states openly that he’s a communist, as does former University of Chicago professor and Weather Underground leader, Bill Ayers.  The CEO and publisher of NWVs escaped from communism in his youth, and this is why he works so very hard to bring the truth to Americans through his website.  We’re all fighting to save our beloved America.  Please, Please help us with monthly donations, every penny is so appreciated.  Thank you!