Permanence, perseverance and persistence in spite of all obstacles, discouragements, and impossibilities: It is this, that in all things distinguishes the strong soul from the weak. Thomas Carlyle

I love those who can smile in trouble, who can gather strength from distress, and grow brave by reflection. ‘Tis the business of little minds to shrink, but they whose heart is firm, and whose conscience approves their conduct, will pursue their principles unto death. Leonardo da Vinci

Why the Left Hates Trump

We all know our President’s major accomplishments, pulling out of the Paris Climate Accords, signing an executive order to withdraw from Obama’s 12-nation Trans Pacific Partnership, repealing Obama’s government regulation of “net neutrality,” and passing and signing one of the largest tax reduction overhauls in over 30 years.  But there is so very much more, and I do believe this man is a gift from God. 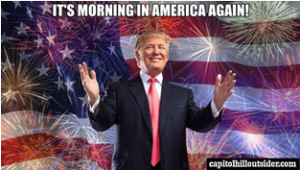 Undoing the devastating Obama legacy of destruction has made our President the target of hatred from every leftist in politics, media and Hollywood. Many of the phony neo-conservative Trotskyite right are just as hateful and vengeful; think of McCain, Flake, Collins, Murkowski, Ryan, McConnell and others in the DC swamp.  Then there’s the likes of Bilderberger Bill Kristol whose father, Irving Kristol was literally a Trotskyite.  (For the millennials, Leon Trotsky was a Marxist who murdered only 3 million Russians as compared to the 85 to 100 million murdered by Lenin and Stalin.)

Trump has taken conservatives back to a different era, before William F. Buckley drove out the Birchers and when we truly had old right conservatism.   If you want to do a purity test, Reagan and Bush would not have passed on a lot of things. Trump truly changes the world on behalf of conservatives.

As for his supporters, the deplorables are thrilled with his accomplishments, and thankful that Hillary and Bill Clinton are not leading this nation into communist destruction, hiding all their corrupt activities, and soiling our White House with their presence.

Our great populist President even outdid his own expectations and slashed at least 11 major legacy items of former President Barack Hussein Obama, including cracking down on the open border, slowing recognition of communist Cuba and effectively killing Obamacare by ending the mandate that everyone have health insurance or face a tax.  He also withdrew from the U.N. Global Compact on Migration; which Trump saw as a threat to borders.

Administrations typically tout their achievements broadly at the end of each year, but Trump listed jobs added, regulations killed, foreign policy victories won, and moves to help veterans and even drug addicts.

And in a sign of support for the unborn, the White House also is highlighting achievements for the pro-life community.  Obama was probably one of the most pro-abortion Presidents to disgrace our country, even worse than Bill and Hillary Clinton.

President Trump has been the most pro-life president in modern history. Within days after his inauguration, Trump reinstated the “Mexico City Policy,” one that prohibits any non-governmental organizations (NGOs) that receive U.S. aid, from performing and promoting abortion overseas.  The Mexico City Policy blocks some $9 billion in foreign aid being used for abortions.

In enacting the policy, Trump also expanded it by directing the Secretary of State to ensure the ban on taxpayer funds for overseas abortions is in place across most U.S. global health programs that provide assistance.

Our President also worked with Congress on a bill overturning an Obama regulation that blocked states from defunding abortion providers.

Pointing to the New York terror attempt, President Trump says that he will end the visa lottery and chain migration.  He has already ended the Obama era “catch and release” of illegal immigrants, and boosted their arrests inside the U.S.  He’s also cracked down on some 300 sanctuary cities that defy ICE but still get federal dollars.  The best part is the fact that our President has added some 100 new immigration judges, and work for the southern wall still continues.  Build that wall!

The President has also nominated 73 federal judges, ordered a lobbying ban, and even called for an audit of the Pentagon.

Justice announced grants of $98 million to fund 802 new police officers, worked with Central American nations to arrest and charge 4,000 MS-13 gang members, and has rounded up 800 of them, which is an 83 percent increase in one year.  The President even signed three EOs aimed at cracking down on international criminal organizations. 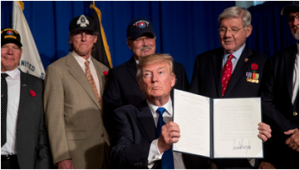 Veterans and our Military

Our veterans are very important to this President, and Trump has a shining new reverence for all of them.  Like our police, he loves our military men and women.  The Veterans Accountability and Whistleblower Protection Act was signed into law in order for senior officials in the VA to fire failing employees and establish safeguards to protect whistleblowers.

The President has signed $2.1 billion in additional funds for the Veterans Choice Program, he’s signed the Veterans Appeals Improvement and Modernization Act,. The Harry W. Colmery Veterans Educational Assistance Act, the VA Choice and Quality Employment Act of 2017, created a VA hotline, had the VA launch an online “Access and Quality Tool” to provide vets with a way to access wait time and quality of care data, and has announced three initiatives to expand access to healthcare for veterans using telehealth technology.

We all know there are none in America more important than those who’ve volunteered for service.  Our veterans deserve the best, and Trump wants to see that they get the best.

Our President is rebuilding our military and working to increase defense spending, while empowering chosen military leaders to seize the initiative and win.  He’s imposed the travel bans, if the leftist judiciary would allow him to protect America’s citizens, directed the revival of the National Space Council to develop space war strategies, pushed strong action against N Korea, and has seen ISIS lose virtually all of its territory, and far more.

Trump is boosting U.S. energy dominance, has worked to bring companies and jobs back to America, has killed job stifling regulations, created 1.7 million new jobs, cut unemployment to 4.1 percent and nearly 1.5 million fewer Americans are on food stamps.  Yet, there’s so much more!

Confidence and respect has been restored to America.  His foreign travels to the middle east and Europe have built new relationships with leaders.  His historic 12-day trip through Asia won him new cooperative deals, and he attended three regional summits to promote American interests.  He even won the release of Americans held abroad, although the actions of these ingrates prove he should have let them rot in prison, but that’s not the actions of this president.

He bows to no foreign leader, they now bow to him, knowing his strength.  Respect for America and her President has been restored.

But the crown jewel of our wonderful President’s first year in office is that he made good on his campaign promise to recognize Jerusalem as the capital of Israel.  In doing so, he called down blessings on America and on himself and his administration.  Why do I say that?  Because Genesis 12:1-3 is part of God’s unconditional Abrahamic Covenant to Israel.  Get that, it is unconditional and still in effect.  Here is what it says:

Now the Lord had said unto Abram, Get thee out of thy country, and from thy kindred, and from thy father’s house, unto a land that I will shew thee:

2- And I will make of thee a great nation, and I will bless thee, and make thy name great; and thou shalt be a blessing:

3- And I will bless them that bless thee, and curse him that curseth thee: and in thee shall all families of the earth be blessed.

We just celebrated the birth of Messiah Jesus, and Genesis 12:3 makes it clear that all families of the earth will be blessed by Israel, and we have been with a Savior from the Tribe of Judah.

And then there’s the frosting on the cake which should make every American patriot thrilled!  One hundred twenty eight (128) UN member nations voted against the Trump administration’s decision to recognize Jerusalem as the capital of Israel, nine voted with America, while 35 nations abstained from voting. After the vote, Ambassador Haley took strong action. 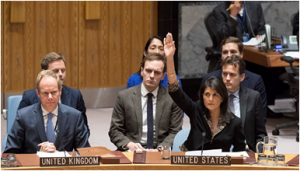 Twenty two percent of the funding of the United Nations, which is run by 200 tin horn third world dictator members, is funded by the United States of America.  These guys all have their anti-American votes, and then they stick us with the tab to fund them.

So, making good on Trump’s promise, Ambassador Nikki Haley has taken an axe to spending for the UN, and I say, HALLELUJAH!  In a press release, Haley’s office announced the United States was able to negotiate a $285 million cut in its contribution to the United Nations for next year.  Time to dump Rockefeller’s UN building in the Hudson River!

It really is a Merry Christmas and a Happy New Year.  God has blessed us with a great President who wants to Make America Great Again and he is off to a very good start!  Bless him and pray for him.

P.S.  Thank you to all the folks who read NewsWithViews every day and who support us with monthly donations.  We cannot exist without you.  Our President is bringing the country back to greatness, and in doing so, we pray every American will have more money in their pockets.  Please help NWVs to remain in the black so we can keep bringing our readers the truth of what is happening in American politics.  Please donate here.