Progressivism, An Illegal Raid On The Public Treasury

“I cannot undertake to lay my finger on that article of the Constitution which granted a right to Congress of expending, on objects of benevolence, the money of their constituents.”    James Madison 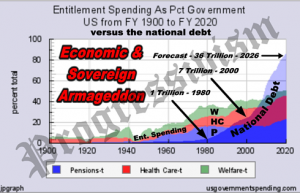 As the above image reflects, America is approaching economic and sovereign Armageddon directly due to Progressivism.  A massive, financial, nation-destroying avalanche is coming and all Americans are standing on the very top of that avalanche, while being totally oblivious to the imminent danger.  If they do know, they don’t care.

This is a difficult article to write; to accuse fellow Americans of being traitors of freedom and their country.  We do not do so lightly.  Nevertheless, from the vantage point from where we make our observations, we have no choice.

From individual rights and liberties, an irrevocable gift from our creator, comes individual responsibility and self-reliance.  Should we deny our responsibility for our own actions and the direction of our own life, should we move from individual self-reliance to dependency on government, we will have squandered that irrevocable gift from our creator and handed it over to a mean-spirited, all-consuming collective.   We have done so at our own peril.

Several years after James Madison made his admonition about the Constitution and charity, a member of Congress took Mr. Madison’s admonition to heart.  On the Floor of the House of Representatives in 1867, Representative Davy Crocket said this about Congress appropriating money for the widow of a distinguished Naval Officer:

“Mr. Speaker — I have as much respect for the memory of the deceased, and as much sympathy for the sufferings of the living, if suffering there be, as any man in this House, but we must not permit our respect for the dead or our sympathy for a part of the living to lead us into an act of injustice to the balance of the living. I will not go into an argument to prove that Congress has no power to appropriate this money as an act of charity. Every member upon this floor knows it. We have the right, as individuals, to give away as much of our own money as we please in charity; but as members of Congress we have no right so to appropriate a dollar of the public money” …………

“……… We cannot, without the grossest corruption, appropriate this money as the payment of a debt. We have not the semblance of authority to appropriate it as a charity. Mr. Speaker, I have said we have the right to give as much money of our own as we please. I am the poorest man on this floor. I cannot vote for this bill, but I will give one week’s pay to the object, and if every member of Congress will do the same, it will amount to more than the bill asks.”

None of the other members of Congress took up Davy Crockett’s challenge to spend their own money for the widow, nevertheless the bill to provide an appropriation (charity) of public money to the widow of the distinguished Naval Officer did not pass.

And yet, as time has passed, since Davy Crockett spoke those words, the Democrats have, with malice aforethought and in search of votes, corruptly appropriated monies from the Public Treasury and have passed out the taxpayers hard-earned dollars to those supposedly less well off, without the slightest constitutional authority.  In so doing, they have invited rampant government corruption.  Every government service program is rife with waste, fraud, abuse and yes, corruption.

This drift towards socialism began in earnest with the first dictator of America, FDR.  His New Deal and Social security programs, passed by Democrats, were fully sanctioned by the U. S. Congress and the U. S. Supreme Court.

The Democrats have delivered on FDR’s Social Security and New Deal programs and much, much more.  They have served up to the American people a platter of abject socialism and added to it, radical environmentalism, on top of open borders to illegal aliens, at the expense of the people’s money.  The American people have been bought, sold and conquered on the promises and propaganda of Democrats who have raided the public treasury for the sole purpose of buying votes to remain in power.  They have accomplished this takeover with a cultural mindset that bears no relation to constitutional principles.  They have appealed to the weakness in men that buy into the propaganda of these con men in order to receive these so-called “free” benefits from their government that bears no relation to their labors.  All this the Democrats have done and Americans have willingly capitulated, without a shot being fired.  One might ask, which of us are more stupid, the people, or the government?

In almost every word and deed, Democrats have forsaken our Constitution, even though Democrat politicians swear on oath to preserve, protect and defend that very same Constitution.  They counter with, “the Constitution is a ‘fluid’ document, subject to interpretation that changes over time.”  They ignore the mandate that the Constitution is to be the Supreme Law of the Land and is to be literally construed using the original intent of the Framers.

Internally, we have allowed the Democrats to turn our balance of power, designed by our Founding Fathers in the Executive, Legislative and Judicial branches of government, on its head and we have allowed un-elected bureaucrats to make our laws.  Our bureaucracies have been infiltrated by liberal, socialists and radical environmentalists, each one a graduate of our very liberal colleges.  And these bureaucracies make law, after law, after law until we are sick of laws and enslaved by them.   Through these laws, with no constitutional authority or legislative approval, they take control of our land, our food, our water, our money, our health care and our rights as individual Americans, all the while driving our national debt higher and higher.  Unfortunately, we let them do it.

We have grave concerns that what we are facing today is a premeditated orchestration of the dismantling of our sacred institutions of freedom by Democrats and international elitists, that find that a free America stands in their way of the their distorted concept of the one-world-order, social justice and environmental protection, at any cost.  In doing so, they have broken the America bank and eroded America’s sovereignty.

Their unconstitutional give-away policies have driven this country into hopeless bankruptcy.  Their environmental policies of restricting everything that we do, has brought this once-proud, can-do nation to its knees and has limited the extraction of our vital resources necessary for a thriving economy.  Their open-border and amnesty policies that allow anyone wanting to come here illegally has changed the color of our politics and thus our freedom, for decades to come, if not forever.

A clear and present danger hangs over this Country like a dark, ominous, angry cloud and threatens our freedom, if not our very existence as a sovereign nation.  That dark, black cloud is manifested in abject socialism and radical environmentalism, the twin domestic evils that have invaded every corner of our culture and that have been sold to us by an invasive “liberal” mentality, promoted by Democrats and implemented by bureaucrats who hide in the “Deep State.”

Progressive ideas didn’t come from our founding principles.  They came out of the bowels of socialist Europe, the United Nations and Saul Alinski’s “Rules for Radicals.”  Their radical ideology has been codified into law by Democrat presidential executive orders and Democrat-controlled Congresses that have lost all allegiance to the Supreme Law of the Land.  These policies come at us with soft-sounding words like social equity, compassion, smart growth, sustainable development, biospheres, wildlife corridors, endangered species, invasive species, climate change, mass transit and the one-world order.  It’s all dressed up in motherhood, apple pie and Chevrolet and it is one of the biggest con games ever perpetrated on what have now become, naïve, uninformed Americans.

But today, because of President Trump, the hidden agenda of these perpetrators is finally being exposed all across America, as people are waking up to what has happened to them while they were sleeping.  It’s way past time to fight back.  This is still a great country, full of great people and it is salvageable if we will just vigorously defend our constitution and hold government to its limits, against the onslaught of failed liberal policies.

Democrats are traitors to America’s founding principles of freedom and liberty and are willing accomplices to the enemies of our freedom and our sovereignty.  Those naive Democrat voters that have hitched their wagon to this party aid and abet the destruction of America.  No other conclusion is possible.

It remains to be seen whether President Trump can truly drain the swamp, break up the Deep State, and reset the course of America back to individual freedom and unalienable rights.  He was not able to get Congress to pass an Obama Care repeal and replace and it is questionable that he can get Congress to pass a precedent-setting tax cut with Republicans so divided.  The “NO” votes are already appearing.

Unfortunately, establishment Republicans for years have been headed in the wrong direction and have forsaken their principles of small government, lower taxes and less restrictions on the people.  These forgotten principles were laid down in a “blue print” for free men and women with common purpose and resolve to live out their lives and govern their individual and collective affairs by adhering to that ‘blue print’, some 241 years ago.

It is an inescapable fact that there will always be the rich among us and there will always be the poor among us.  Sometimes the rich will make a wrong decision, lose their wealth and join the poor.  Sometimes the poor will break the bonds of poverty and join the ranks of the middle class or the rich.  It is the natural order.  When government tries to even the playing field by passing laws and “raiding the Public Treasury” to buy votes, they muck it up every time and their meddling usually hurts the poor and the middle class, but never the rich.   In the process, their entitlement programs, allegedly designed to even the playing field, become the great sucking siphon of America’s wealth, prosperity, sovereignty and financial security.

But since there are not sufficient forces to peacefully stop Progressives from continuing to raid the Public Treasury for votes, the slide to socialism and eventually a dictatorship will come like a sudden avalanche.  When that happens it will be too late to stop it.  The Trump’s and Reagan’s of the past will be but a fleeting memory as we sink ever deeper into a Progressive-driven financial and sovereign Armageddon and mass enslavement.  No, we’re not kidding, but so few “get it“, or care.