“If you tell a lie big enough and keep repeating it, people will eventually come to believe it. The lie can be maintained only for such time as the State can shield the people from the political, economic and/or military consequences of the lie. It thus becomes vitally important for the State to use all of its powers to repress dissent, for the truth is the mortal enemy of the lie, and thus by extension, the truth is the greatest enemy of the State.”  —Joseph Goebbels

A false witness shall not be unpunished, and [he that] speaketh lies shall not escape. —Proverbs 19:5

“Accuse Others of What You Do” – Karl Marx

Jeb should have his name legally changed to Hypocrite Bush.

During the pre-New Hampshire ABC GOP presidential debate, Bush slammed Donald Trump on eminent domain. He was playing to a clearly hostile anti-Trump crowd, knowing that the Trump supporters only received 20 tickets for the debate. Jeb used eminent domain as a club to bash The Donald, citing a decades-old case of an elderly Atlantic City lady who refused to sell her property to Trump, which he wanted for a parking lot. Atlantic City condemned her property, trying to force her to sell, she challenged the condemnation in court and won. Trump quickly abandoned the idea in favor of more willing neighbors who sold their property to Trump for his parking lot, and he paid them quite well for their properties.

The Atlantic City story is now being repeated over and over again by the neo-cons to try to destroy Mr. Trump.  They’re using the tactics of Joseph Goebbels, repeat a lie often enough….and people will eventually believe it.

The government wanted his land, but Jesse Hardy wasn’t interested. He said it wasn’t about money, it was about fighting for what is his.  Jesse James Hardy was a symbol to some people of an individual besieged by government authorities and their allies in the environmental movement.  Think United Nations Agenda 21, because that’s what this is! 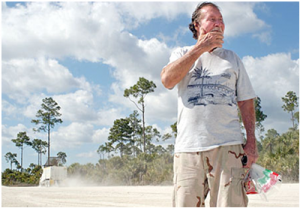 Governor Jeb Bush authorized the State Department of Environmental Protection to begin eminent domain proceedings against an elderly man who just wanted to keep his land.

Jesse Hardy became disabled from a chopper jump after 14 years of service as a U.S. Navy Seal. In 1976, he bought 160 acres of swampland that nobody else wanted. And he intended to keep it, but the State and Florida’s EPA had different ideas.

When Jesse bought the land it was nothing but shallow land on an underwater reef which no one wanted, and no one owned.  Jesse built a shed, then a house, and dug a well, he made the unwanted rough land inhabitable.  Life was pretty crude in the beginning. He’d wait for a warm day to take a shower. Eventually though, he had air conditioning, reverse osmosis, a washing machine, a cell phone, a satellite dish. He had solar panels on the roof and a big generator out back. 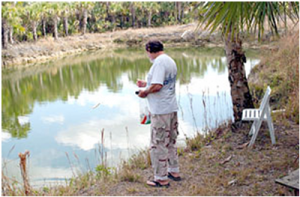 Jesse was a businessman, he ran a limestone quarry on his property that generated considerable revenue. His land, he said, was his life.  Jesse Hardy fed bread to the fish in one of the stocked ponds on his land. The ponds were a byproduct of his limestone mining operation.

In 1995, the niece of a family friend gave birth to a premature boy with severe medical problems. Tara Hilton, age 43, and little Tommy had nowhere to go. So they moved in with Hardy, who raised the boy as his son.

A year after Tommy’s birth, Hardy said he dug a test lake and stocked it with catfish, bream and tilapia to see whether his dream of establishing a fish farm could come true.

Like Tommy, the fish thrived, and Hardy and Hilton said they hatched bigger plans to dig four 20-acre lakes for recreational and commercial use. 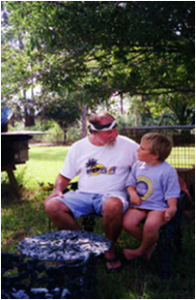 Jesse in front of his stocked pond

Then Naples started growing, and encroaching, as the everglades to the east became drier.

Florida first laid the groundwork for taking Hardy’s land in 1985, when it began buying 55,247 acres of the bankrupt and largely abandoned South Golden Gate Estates. Environmentalists considered the tract vital to restoring the natural flow of the River of Grass and protecting the water supply.

(President Bill Clinton and Gov. Jeb Bush met in the Oval Office on Dec. 11, 2000, to launch a $7.8 billion effort to revive the Florida Everglades.)

Nearly 20 years and $121 million later, the state owned almost every inch of South Golden Gates Estates, except 800 acres claimed by the Miccosukee Tribe of Indians — and Hardy’s 160 acres.

Mr. Hardy’s land was in the middle of the failed housing complex, Southern Golden Gates Estates. The land for that development was carved out of a swamp years ago, and subdivided by canals and dirt roads. State authorities and environmentalists wanted to tear up the roads and fill in the canals, and allow water to flood the land, to restore it to its natural wetlands condition.

Nancy Payton of the Florida Wildlife Federation, an environmental group that has worked to restore the area for years, said Jesse’s land was essential to the project.  “Southern Golden Gates is a keystone parcel, because it is surrounded on almost every side by public lands, conservation lands,” she said. “It is remote from any public facilities. It is remote from schools and from even a supermarket. It is not a good location for people to be, and the best and highest use for Golden Gates Estates is to restore it.” 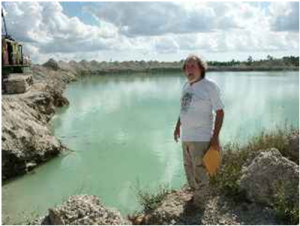 But the offers from the state kept coming, and the pressure kept mounting with the price. So, too, did Hardy’s status as a folk hero. His celebrity, though, would prove no match for the state. After Hardy turned down the $4.5 million, Gov. Jeb Bush and the Florida Cabinet authorized the state Department of Environmental Protection to begin eminent-domain proceedings.

“I’m telling you, I got took,” he said. “They stole my life.  What they’re trying to do is take all the humans . . . bunch up people like in real close proximity, get all the people in one damn bunch so they can say, ‘Don’t go out over there! A chicken’ll get ya!’ ”

“They’re trying to stop a way of life.”

Jesse was right about that, and what he describes is UN Agenda 21’s Smart Growth.

When Jeb was governor of Florida, he ordered backyard citrus trees to all be destroyed without compensation to residents, because of an outbreak of citrus canker disease.  This was the largest private property confiscation via eminent domain in the State of Florida.  Link

He not only ordered seizures by force, but it was Bush himself who refused to reimburse the residents for the property he unlawfully ordered to be removed and destroyed.

What happened in Florida under Jeb Bush’s administration is nothing less than a chipping away at a fundamental guarantee in the Constitution.

“I stood here and watched them take our Ruby Red grapefruit, a Key lime, a Valencia orange and a Calamondin,” said Coral Gables retiree Walter Jureski, eyes brimming with emotion. “It was heartbreaking. We loved those trees, and they were loaded with fruit.”

For his losses, Jureski, 80, like other homeowners, received a $100 voucher to be used in the garden department at Wal-Mart. But even if there wasn’t a ban on replanting citrus, he wouldn’t do it. Said Jureski: “I couldn’t stand to go through that again.”

The people were violated. They said, “The Agriculture Department’s hired goon squads break down your fences, trample your rights, and destroy private property.”

Under an emergency order by Governor Bush, canker crews do not need an owner’s permission to walk onto private property and take out citrus trees. Lushly landscaped yards have been reduced to vacant lots in minutes. “They raped our yard,” a caller named Lynn told a Miami radio talk-show host. “I’m horrified, appalled, furious. Just livid.”

Bush’s action is now costing the State of Florida hundreds of millions in lawsuits and legal fees.  A south Florida jury has ordered the State of Florida to pay $11.5 million as compensation to 58,225 residents of Broward County.  Similar class-action lawsuits took place in Miami-Dade, Palm Beach, Lee, and Orange Counties.  The Palm Beach verdict came in at an estimated $16.1 million reimbursement. Link 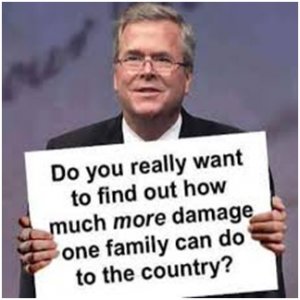 Jeb’s brother, George W., who he is using in spots to campaign for him, acquired most of his wealth when the City of Arlington, Texas grabbed homes through eminent domain.  Bush could then build a new baseball stadium for the Texas Rangers and an accompanying parking lot, a team then-owned by a group where George W. was the general manager and key partner. You might want to read the article in Pensito Review regarding the shenanigans pulled by George W.  The article states, “This is exactly the sort of gambit used by former Illinois governor Otto Kerner, who was convicted of tax fraud as a result.”  Link

Next time one of the establishment folks brings up Donald Trump’s Atlantic City development and the use of eminent domain, remind them of Jeb Bush’s actions while Governor of Florida.

Jeb Bush used eminent domain to take the one thing most loved by a disabled veteran, land he bought and developed and intended to live on until he died.  All for the EPA.  Jeb trampled homeowners’ rights with the destruction of healthy citrus trees, and no compensation for their losses, resulting in the state losing millions of dollars in lawsuits by homeowners.

The entire Bush family obviously sees no problem with eminent domain.  So yes, Jeb Bush should have “hypocrite” in front of his name.