Raw Meat In A Forest

“It’s more complex than just slapping up a wall.  We have got to take a look at all the complexities in terms of eliminating the incentives (“magnets”) for illegal immigration.”  —Ron Johnson – Wisconsin U. S. Senator

Many years ago four of us went fishing in central British Columbia. We hiked back in with day-trip packs to a remote lake where a couple of rowboats had been stashed. With two in each rowboat we set out towards the middle of the lake to fish for a while before lunch. The fishing was good because not many people wanted to make the long hike into the lake. The lake hadn’t been fished for most of the season.

After catching quite a few fish, we headed back into camp to have lunch.  The menu that day was baloney and other meat sandwiches, bananas, apples and of course the obligatory smooth Canadian whiskey.  After downing our sandwiches and fruit, sipping the Whiskey and discussing the catch of the morning, one of the boats with two men headed back out into the lake to fish some more.  The other two fishermen held back for awhile to clean up the camp and hang the packs on a few trees before they too headed out into the lake.

The first rowboat was well out into the middle of the lake when they heard yelling from the men in the second rowboat.  But the men in the first rowboat couldn’t understand what they were yelling about.  They were too far away.  The second boat finally caught up with the first boat and the two guys in the second boat started gushing about a very large bear walking down the side of the lake towards our camp.  There was still leftover food in our packs and we figured the packs would be torn to shreds by the time we rowed back to camp.  We weren’t wrong. 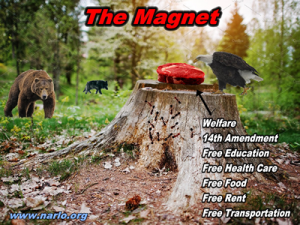 It took about fifteen minutes to row back to the camp and by the time we got there the bear had torn the packs off the trees, ripped out the food and was devouring the contents.  Safely floating out in the lake, we yelled at the bear to shoo.  He came down to the edge of the water and started to wade in as if to challenge us.  This was a BIG bear and not wishing an encounter with the bear in the water, both boats hastily rowed back into the middle of the lake.  Fortunately, the bear didn’t follow.

After fishing well into the afternoon, we headed back to shore to assess the damage to our gear.  Sure enough, the packs were lying on the ground and the contents were scattered all over.  Most of the food had been eaten but thankfully the bear was gone, or so we hoped.

On reaching camp, we beached the rowboats and started putting our gear back together.  We then headed down the four-mile trail, back to where our car was parked.  Nevertheless, we were quite concerned that we could run into the bear again so we divided the fish up into two gunnysacks.  We were not equipped with bear spray.  The guy in front had one gunnysack of fish and the guy in the back had the other gunnysack.  The instructions were that if the bear approached us from the front, we would throw the gunnysack full of fish at the bear and retreat in the opposite direction.  If the bear approached us from the rear, the same would apply.  Fortunately, we never saw the bear again and breathed a sigh of relief when we reached the car.

So what is the moral of this story?  Don’t leave raw meat in a forest.  It turns out that bears have a sense of smell that is estimated to be 2,100 times that of a human.  They can smell meat or prey from miles away.  But the other moral is, that if you put out raw meat in a forest all the predators, from wolves, raptors and insects will come for miles in search of a free meal.

The same is true of humans.  If you put out “magnets” (meat) they will be attracted to the magnets and will come from thousands of miles away for a free meal, welfare recipients or illegal aliens.  They will come by foot, or by car, bus, truck, or train.  They can smell a “free meal” all the away from Costa Rica.  They will take only what they can personally carry on their long journey to the promised land, hoping that they will be re-stocked when they reach their destination, the generous United States of America, where jobs, government “pig troughs” and unimaginable “riches” await them.

Now most campers and fishermen are fully aware of these facts and take precautions to not attract predators, or arm themselves with weapons to protect them from the predators.

Unfortunately, government takes no such precautions and Congressional Democrats seem inclined to purposely entice illegal aliens (magnets) to pour into America by the millions, now estimated at around 22 million.  The American taxpayer is subsidizing most of those 22 million to the tune of hundreds of billions of dollars a year.  We could repair most of America’s infrastructure in a few years from what we are paying for illegal aliens.

Democrats want open borders.  They won’t eliminate the magnets (meat) and they fight the Republicans to maintain them.  They seem almost euphoric when a couple of thousand peasants from foreign lands illegally breach our borders every day in the hopes of benefiting from those magnets that legal Americans are forced to pay.  Democrats don’t see these hapless foreigners as enemies, or as drags on our economy.  They don’t care about the diseases the illegal aliens bring with them, diseases America eradicated decades ago.  They don’t take into account the lost jobs and lower wages.  They don’t see the hordes of uneducated aliens as a humanitarian or security crisis.  They only see them as future votes.

But like all things, decisions, policies and laws have consequences.  You lay out raw meat in a forest and the predators and carrion eaters will come from miles around, for a free meal.

Take California for example.  In a Real Clear Politics article the effects of illegal immigration are laid bare for all to see.

“The health, educational and legal costs associated with massive illegal immigration are squeezing the budget. About a third of the California budget goes to the state’s Medicare program, Medi-Cal. Half the state’s births are funded by Medi-Cal, and in nearly a third of those state-funded births, the mother is an undocumented immigrant.”  (Each one of those babies born to an illegal alien mother become an American citizen and become just one more “magnet” to draw more illegal aliens to California.)

“California’s progressive government [Democrats] seems clueless on how to deal with these issues, given that solutions such as low-cost housing, strict enforcement of health codes, or [illegal immigration enforcement], are seen as either too expensive or politically incorrect.”

“In sum, California has no margin for error.”

“Spiraling entitlements, unwieldy pension costs, money wasted on high-speed rail, inadequate water storage and delivery, and lax immigration policies were formerly tolerable only because about 150,000 Californians paid huge but federally deductible state income taxes.”  (Under the 2017 tax reduction act, now only $10,000 of state income taxes are deductible.  In 2017 138,000 people moved out of California to states like Nevada, Arizona and Texas.)

“No more. Californians may have once derided the state’s 1 percent as selfish rich people. Now, they are praying that these heavily burdened taxpayers stay put and are willing to pay far more than what they had paid before.”  (Why should they?)

The illegal immigrant and homeless population drive much of California’s money woes.   The best estimates suggest that in 2014, the year of the most recent data available, California was home to between 2.35 and 2.6 million undocumented immigrants. The homeless population is about 134,000 on any given night.  Nearly a quarter of the nation’s undocumented immigrants reside in California, where they constitute more than 6% of the state’s population.   Over twenty five percent (25%) of America’s prison population is made up of illegal aliens.  California’s lack of immigration enforcement and the state sanctuary policy are the magnets (meat) that draw the illegal population to California.  They also draw thousands of illegal alien criminals, like the one that shot and killed Newman Police Officer Ronil Singh, a legal immigrant, or the one that killed Kate Steinle, an innocent legal American bystander on a San Francisco pier.

But ladies and gentlemen, if you have been paying attention, you have heard all this before.  There is nothing new here.  It’s been going on for decades and it’s getting worse.  The damage may be so bad by now that it is irreversible.  America’ culture may be altered forever.

No one seems willing to stop the hordes of illegal aliens pouring into America.  The politicians won’t stop it.  They are too busy fighting among themselves for political power.  The border patrol can’t stop it.  There is just too much border to patrol.  Walls would help but walls are not the total answer.  The military could stop it by making an illegal border crossing extremely painful, if not deadly.  The people could stop it, but they won’t.  The people are all sitting on their hands waiting for the government to stop it.  After all, it is the government’s job, isn’t it?  Everyone is waiting for the other “guy” to stop it, but meanwhile no one is stopping it.

Now you won’t like what we are about to say.  You will say it is barbaric and inhumane.  However, if illegal immigration started spreading a disease throughout the population and it couldn’t be stopped, government would have no choice but to quarantine the sick, legal and illegal alike.  Some illegal aliens would have to be sacrificed to protect the general population from the epidemic.  Border patrol agents would be ordered to shoot to warn and then shoot to kill all illegal aliens attempting to cross the border.

We’re sick of people making this an emotional or a compassionate issue.  It is a life or death issue.  If there is no price to pay for illegal aliens to come to America, and there isn’t, massive illegal immigration will never stop until America becomes a third-world bankrupt country where America’s sovereignty and culture will be destroyed and run-away inflation will become the norm, not the exception.  America cannot take in all of the world’s poor, or even a small fraction of them without destroying herself.

If the government won’t do it, then legal Americans will be forced to stop illegal immigration with two specific actions.  First, on a massive scale, make all illegal aliens in America feel so uncomfortable to the point they will self-deport.  Second, convince the government to employ drastic, if not lethal measures at the border.  Eliminate the magnets.

If government won’t remove the magnets (raw meat in the forest) and stop the illegal entries, then it is up to the American people to do the job that government refuses to do, or suffer the irreversible consequences.

And that ladies and gentlemen, is just one side of the STATE OF THE UNION!