Home/February 2019, Opinions/Reality Check: You Can’t Camp on Mars or Thrive in Space

Reality Check: You Can’t Camp on Mars or Thrive in Space

Last week, while my friend Steven and I rode up a ski lift at Winter Park Colorado, I shared my latest book by astronaut Scott Kelly:  Endurance: A  Year in Space—A Lifetime of Discovery.  He spent a year on the International Space Station.  He lived the most time in space of any American.  This week, Christina Koch returned from 328 days in space—the longest for an American woman.   I can’t wait to read her book.

Last year, I visited the Kennedy Space Center with a real-life simulation of blasting off to space.  Talk about thrilling!  It chronicled our space exploration from John Glenn to Neil Armstrong standing on the moon.   My wife Sandi and I enjoyed a thrilling day of the NASA space program. 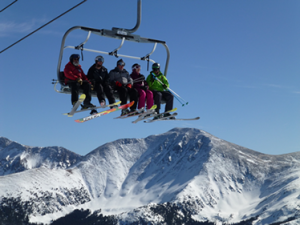 In the autumn, I watched Brad Pitt in Ad Astra, a space movie where he flies to the moon. From there, he blasts off to Mars in search of his father who suffered a bout of ‘space-craziness’.

The entire movie showed humans crammed into spaceships that landed on concrete bunkers on the moon.  Everywhere: computers, steel, concrete and glass!  The bunkers showed pictures of waterfalls, grassy fields and animals to help the astronauts feel more at home.  But in reality, the moon remained barren, cold and dead.  When Pitt blasted off to Mars, he landed on a cold, lifeless and indolent piece of rock known as Mars.  On Mars, the same concrete, steel and glass!

The movie SO depressed me that I walked out of it.

As I talked about my experiences while riding up the Panoramic Lift to 12,000 feet, Steven said, “That’s all well and good, but you can’t camp on Mars.”

Steven’s remarks made me think.  Right now, humanity ransacks this planet with enormous amounts of biosphere exhaust via billions of cars, chimneys, wood and chemical pollution.  We degrade the oceans with over 5.5 trillion pieces of plastic.  We’re inject over 70,000 chemicals into the air, water and land 24/7.  We’re changing the DNA of animals and plants by making them genetically modified organisms. We’re causing the extinction of 100 species 24/7 without even a second thought.  We’re packing the planet with an unheard-of number of human beings at 7.6 billion—headed for 10.1 billion and up to 14 or 15 billion in the next 80 years.

In other words, we live in Eden, but we’re destroying Eden as fast as we can destroy this paradise.  And then, we think we might colonize the moon and on to Mars.

Only one problem: why would we trash this planet to go live on two other barren pieces of rock?  Why don’t we take care of our primary home?

After reading Scott’s book, he suffered vision degradation. His joints were and are still crippled.  He experienced blood ‘pooling’ in his brain and in his organs from lack of gravity.  He suffered bone deterioration and loss of muscle mass.  He proved to be a staggering example of why humans won’t ever live in space or colonize another planet.  They carried him off the returning space capsule because he couldn’t walk.

As Steven said, “You can’t camp on Mars.” That begs the question for me: Why aren’t we taking better care of our viable, beautiful, living planet named Earth? It sustains us. It feeds us.  It offers incredible opportunities to live, thrive, love and enjoy our families.

Right now, in 2020 and during this decade, we face enormous challenges, if not, outright catastrophic consequences to all life on this planet—including ourselves.  I mean, we’ll add 83 million more humans to the planet in 2020. And the next year, another 83 million.  Another 1 billion humans by 2032!  The utter insanity of these additions to this planet cannot be sustained.  Last year, according to the UN, 12 million humans starved to death.  Another 1 billion humans couldn’t access clean drinking water.  In India, 77 percent of its citizens lack access to a toilet.

Yet, we’re spending  trillions of dollars trying to colonize Mars.  Going back to the moon?  Does this quest make sense to you dear fellow American?

How about we preserve, protect and cherish what we have on this planet?  How about we stop tossing our plastics and chemicals into the oceans?  How about recycling, reusing, re-fitting everything responsibly?  How about economic return incentives on all plastics, metal, glass and all other materials back into a re-use circuit?  It can be done in a heartbeat with a 50-cent deposit on everything recyclable.

What about you? Do you want your children living on Mars?  Do you think you would like to camp on the moon?  Are you satisfied with how Americans treat this North American continent with all the trash across the countryside, pollution in the air and chemicals sprayed on all our crops?  I could add another dozen nasty things we’re doing to our country: Dow Chemical, DuPont, Monsanto, Roundup, Weed-B-Gone, GMO’s, high fructose corn syrup, sucralose, dextrin, insecticides, herbicides, chemical fertilizers and the list grows. 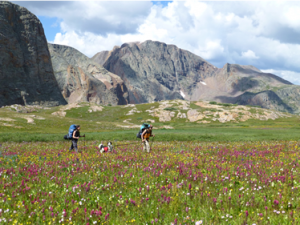 Disease, and Malaria.  Homelessness and poverty grows in America by the hundreds of thousands and into the millions.  Wars explode around the world from lack of resources.  Why don’t we solve those problems before blasting off to Mars?

Steven and me?  We like to go camping. We live to feel, touch and see the incredible beauty of this planet in our lifetimes.  We love the good green grass growing under our feet or a dive into a cool mountain lake.  We love to sling our backpacks on and tramp through a field of wildflowers.  We love to sit by a campfire’s glowing embers. We like to follow that curling gray smoke as it rises through the pine trees and guides our eyes to those distant stars in the ink-black of the night sky.

(Backpacking the Colorado Trail at Elk Creek at 11,000 feet)

Let’s take care of this precious planet, first, middle and always.  Wouldn’t you agree?  What are you doing in your neighborhood to care for this planet?