Regime Change Is Coming To Iran

Despite easing down, the sporadic protests have been ongoing across Iran and has been widely energized by the words and support from President Donald Trump – and the hope for more substantial support. Despite its vast oil and gas resources, the Iranian economy is in shambles.

More than three decades of rule by the Islamic Republic of Iran (IRI) has not only failed to achieve the security and well-being of its people, it has ensnared the nation in a stifling theocracy where the rights of the governed are routinely violated for the benefit of the governing.

The revolution of 1979 that brought down Mohammad Reza Shah in the hope of instituting a democratic government was quickly usurped by a religious autocracy.

For the past 40 years, the Islamic Republic’s response to the legitimate peaceful protests and demands of the people has been an iron fist in the form of heartless beatings of the demonstrators—both men and women—there have been arrests, torture and rape of some in secretive compounds, and even shooting the unarmed in the streets, a standard stock of dictatorships, yet the surest way of swelling and solidifying the ranks of the dissenters.

Time has arrived to end the Mullah’s reign of terror. Unfortunately, both the New York Times and the 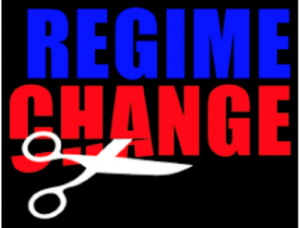 Washington Post who have offices in Tehran, and other liberal news media are not reporting accurate stories from inside Iran. Millions of Iranians from all walks of life are gearing up to end this horrific nightmare.

President Donald Trump has a historic mission to redeem a flawed policy followed by his predecessor, President Obama. In 2009 people when in the streets of Tehran were chanting

“Obama are you with us or with them. Regrettably, President Obama stayed with the mullahs which emboldened them to mascara the protesters.

The internal dynamics within Iranian society has drastically changed. Iranians no longer fear the brutal Mullahs and demand regime change. These protests have become mainstream. Even students from an elementary school students in a remote village dare to say: “Death to Khamenei.”

These Islamic rulers are aware they are slowly losing complete legitimacy (by many accounts it has no legitimacy), and will be toppled, in a violent confrontation with similarly sized demonstrations. There may be a handful of regime officials who are struggling activists for reform, but the entire Islamic regime is aware of the looming threat from their citizenry.

The mullahs’ regime still exists because the US and its allies have failed to pursue a workable strategy to end it. It is, at best, appeasement to make any deals with the sworn enemy of the United States of America. How clearly and how often do the mullahs have to proclaim their irreconcilable and irreversible hostility toward the U.S. and Israel? These mullahs believe their own delusions of grandeur. They think that they can win their brinkmanship and they do firmly believe that they will outsmart America, rest of the world and will have their way. In the process, they are more than willing to do whatever services their objective, by any and all devious means. Dealing with the mullahs brings to mind the “peace in our time” that Chamberlin brought to England by his deal-making with the Fuhrer. Except that this time the stakes can be much higher and deadlier.

I am personally opposed to any military action in Iran. So, that’s out. Let us be reminded that we have invaluable allies on the ground in Iran. There are some 50 million Iranians who are the best hope of the world in that part of the world. These enlightened Iranians despise the Mullahs and have no animosity toward Israel or the United States. Most of these people are well-educated and smart and have broken away from the slavery and fraud of Islamism. They are in the best position to send the Mullahs packing for good. Instead of throwing a lifeline to the sinking ship of the Mullacracy, we must act resolutely in doing everything non-violent to help them defeat the Mullahs. It is our best bet.

The only viable approach is not half-hearted but full court press restrictive economic measures against the Islamic rulers. Unfortunately, it would make the Iranian people, particularly those outside the ruling apparatus suffer hugely. Yet, a temporary hurt of this nature is the price that people are willing to pay to get rid of this scourge that is the IRI.

And by full measure, I mean just that — a complete, unyielding crippling of the oil industry and all banking operations. Severe shut-down of the Persian Gulf States’ backdoor for the mullah’s transactions with the world. Entice China for full cooperation. Even bribe Putin to join in. A Herculean task.

The best strategy that stands the greatest chance of success and entails the least risk of starting a cataclysmic chain reaction is for a “coalition of the willing,” to borrow a phrase, to rally behind the Iranian opposition. It is the democracy-seeking secular Iranians who are thoroughly capable of dislodging the tyrannical Mullahs. The call of the opposition should be resoundingly answered by President Trump and all other nations and leaders, not only for humanitarian reasons, but in furtherance of their own national interests.

But, once the regime, falls, it would be the greatest thing since the fall of Soviet communism. It would subvert virulent Islamism by creating a truly democratic secular strong nation allied with Israel in the heart of the Islamic Umma (Muslim world). It would be an answered prayer both for the world and for Iranians. How many Iranians would leave Islam? Millions have already left, in fact, Christianity is the fastest growing religion in Iran.

We need our insightful administration sees the handwriting on the wall and takes drastic action.  The ripple effect throughout the entire Middle East would be monumental. In a nutshell, Islamic terrorism would eventually cease to exist.