Home/October 2020, Opinions/Remember, You Got A Taste Of Biden When Obama Won

Remember, You Got A Taste Of Biden When Obama Won

“Democracy and socialism have nothing in common but one word, equality. But notice the difference: while democracy seeks equality in liberty, socialism seeks equality in restraint and servitude.”     Alexis de Tocqueville, French aristocrat, diplomat, political scientist and historian  (1805 – 1859)

Most of us remember when Obama, just before being elected president, said:  “We are only five days from fundamentally transforming America.”  That bold, anti-American statement should have sent shivers down the spine of every free-loving American.  What was wrong with America that made it necessary to “transform” it?

Perhaps there were some patriotic Americans felt their spines shiver at the thought of an angry black man taking power in America.  Unfortunately, most didn’t as they were so enamored by a black man becoming president they failed to recognize the evil plans Obama had for “his” America.  In eight years of being president, Obama showed us what he meant and the “transformation” in his image began on that fateful January 20th day of 2009.  How ironic it is, that the first black man to be elected president of the United States, a historical moment, was a raging socialist.  (Here’s why: “Obama’s Childhood and Young Adult History”) 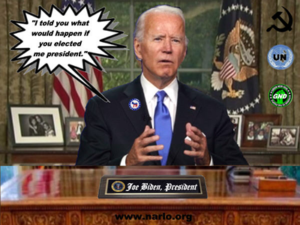 Now we’re faced with a slow-of-wit, aging, hollow, empty shell of a man who wants to be president.  This losing-his-mind derelict spent 47 years in public life but never accomplished anything except getting filthy rich for himself and his family.  He wants to “fundamentally transform” America again, only much worse this time.  There was no Green New Deal when Obama took office in 2009.  There was no free college tuition being offered, or forgiving student loan debt.  There were no threats to abolish the Electoral College and pack the U. S. Supreme Court.  There was no talk of repealing the Senate filibuster rule.  No one had thought of providing free health care and a whole bunch of other taxpayer-funded benefits to illegal aliens.  If Biden becomes president he has sworn to stop all deportations and detentions for criminal aliens by ICE.  This is nothing less than an open door policy to the rest of the world, where border security and sovereign integrity are a cruel joke.

There was however talk and legislation to nationalize America’s health care industry under Obama Care.   Obama Care was the stepping-stone and the plan all along to take us to a full-fledged single-payer health care system under Medicare For All, one of the hallmarks of the Democratic Platform.

Obama gutted the military, as most Democrat presidents do, and increased regulations exponentially on everything from the environment to wild-eyed socialist causes.  His foreign policy initiatives and his deal with Iran were raving failures.  All Americans can expect just about the same from a Biden presidency. He will revive the failed Iran deal and put us back into the Paris Climate Accord where trillions of dollars will be sucked from American taxpayers to fund the fraud of climate change.  (See: “Climate”)

If the Democrats take both houses of Congress and the presidency, all these things they want are very likely to come to pass.  If they are successful, the cost to American freedom, American pocket books, American sovereignty and the economy will be devastating.  All of the things that President Trump did to improve the lives of all Americans in just four years, will be thrown into the trash heap.

Remember, Obama Care hasn’t worked and the cost has only gone up, dramatically.  Obama Care was patently unconstitutional no matter what Chief Justice John Roberts said.

Every estimate for the costs of any government program has turned out to be greater than the estimates by several orders of magnitude.  Government hardly ever gets it right but that fact falls on the deaf ears of Democrat voters.  They only see the “free” dollars they get from being dependent on government.  Personal pride, honor, achievement, excellence, self-reliance, individual responsibility and unalienable rights are far from their petty, empty minds.

THE LEGACY OF DEMOCRAT PRESIDENTS AND THE RISE OF POGRESSIVISM

Every Democrat President since Woodrow Wilson has led America closer and closer to a socialist nation, all the while disrespecting the work of the Founding Fathers in their pursuit of individual freedom.  They have continually violated constitutional safeguards for individual liberty.  Wilson’s policies “reflected a deep commitment to the humanization of the industrial system and laid the foundation for the modern welfare state.”  If you thought that universal health insurance was a new idea, think again.  President Theodore Roosevelt had proposed it and Woodrow Wilson attempted to pass it, unsuccessfully.  “Wilson’s New Freedom initiative did much to extend the power of the federal government in social and economic affairs, and arguably paved the way for future reform programs such as the New Deal and the Great Society.”  (Bold quotes from multiple sources)

Franklin Delano Roosevelt (FDR) is known for extending the great depression by several years with giant leaps into socialism, including the passage of New Deal social and subsidy programs and Social Security, which by the way, is set to run dry in 2035.  “Under the National Industrial Recovery Act and the National Industrial Administration (NRA) the federal government took over certain private industries and put them under the control of the NRA.  Those industries were forced to fund the NRA through taxes levied upon their businesses.  It was estimated that the NRA increased the operating cost of those businesses by 40%.”

Under the Agricultural Adjustment Act (AAA) “FDR promoted higher food prices by paying farmers to plow under some 10 million acres of crops and slaughter and discard some six million farm animals.  This policy and subsequent programs to pay farmers for not producing, victimized the 100 million Americans who were consumers.” (Source: Cato Institute)

These were hardly free-market, constitutional solutions to economic problems.  FDR just did them, with the help of a Democrat Congress.  Nevertheless, he failed to pack the Supreme Court when Democrats and Republicans came out against the idea.  If Biden wins, Democrats will probably try again but they will most likely fail.

Then along came President Johnson’s Great Society.   The Civil Rights Act of 1964 and Medicare, Medicaid, food stamps and Head Start programs were passed during Johnson’s administration.  The Civil Rights Act was filibustered by Joe Biden’s hero, KKK, black-hating Senator Robert Byrd, wherein he spoke for 14 hours and 3 minutes against the act.

Most of the southern states were against passage of the Act and put up a giant roadblock that lasted some 57 days.  They were so angry with Democrat President Johnson several southern block states shifted to Republican and have remained mostly Republican ever since.

Johnson expanded the federal government’s role in education and health care as well, interfering with local control of education.  Many of the issues Johnson tackled as president are still raging problems today and many were just continuations of FDR’s New Deal.  Their effectiveness is still open to wide debate but it is crystal clear that Johnson’s Great Society “was the largest, most intrusive expansion of the federal government ever.”  Johnson fully pulled off one of the greatest “fundamental transformations” in American history, eclipsing Woodrow Wilson and FDR.  One of the negative results was the breakdown in the Black family structure and the increase in Black dependency on government.  Racial strife and violence are still with us today in spite of the Civil Rights Act.   It is even worse because of Democrat socialist policies and Democrat race baiting and division.

Democrat President William Jefferson Clinton once again increased not only costly social programs on the American people, he created the “President’s Commission on Sustainable Development” which had the effect of adopting an international environmental policy without that policy being debated and ratified by the U. S. Congress, as required by the U. S. Constitution.  That international environmental policy was none other than the United Nations Agenda 21 accord, adopted in 1992 by over 170 nations, including being signed by our U. S. President, George H. W. Bush.   Agenda 21 has infiltrated every level of environmental and social law, from almost every city, to the states and the federal government and has all but eliminated constitutional protections for property rights.

The core elements of Agenda 21, (or sustainable development as it is called), are economic growth, eradicating poverty, reducing inequality, social inclusion, (whatever that is) environmental protection, management of natural resources and ecosystems, including addressing climate change. Private ownership of land is to be abolished and land use is to be managed by government.

All of the above Democrat presidents focused on the collective and not the individual and yet the whole concept and foundation of America’s Constitutional Republic is based on protection by government of individual rights, as codified into law by the U. S. Constitution.

Socialist Democrats Joe Biden and Kamala Harris are in the category of presidents that put their focus on the collective, which includes the poor, downtrodden, women and allegedly the racially oppressed.  But they aren’t focusing on these groups for altruistic reasons.  They are strictly focusing on these groups for their votes because there are more of them than there are of us.  Their goal is perpetual political power by any means.  If Biden gets elected, they may accomplish it.  Propaganda, lies, distortions and myths are the weapons to achieve that power and they are not above fomenting racial division, class warfare, cheating, stealing, or political skullduggery, like forcing mail-in ballots in several states.

What you will get with a Biden-Harris Administration is a Democrat, Progressive, Wilson, FDR, Johnson, Clinton and Obama Administrations combined, on steroids.  They will openly and blatantly finish the job that Obama started, to turn America into a socialist nation where “equality is achieved by restraint and servitude”, a nation run by power-obsessed oligarchs, aristocrats and out-of-control, un-elected bureaucrats.

But then, aren’t we already there now?  The Establishment and Deep State are in control and it appears that the perpetrators within the FBI, DOJ, CIA and NSI (along with Hillary Clinton and the DNC) are going to get away with an attempted and unprecedented coup against a sitting U. S. President.  It is unlikely anyone will go to jail for their crimes because America has evolved into a two-tier society, high-level political operatives who are immune from prosecution and those who are subject to the full extent of the law, like the rest of us.

The Durham Report on the attempted coup by Obama, Clinton and their cohorts, if released before the election, could change the outcome of the election in favor of Trump and show just how corrupt are Democrats.  But alas, Durham doesn’t plan to release the report or issue any indictments prior to the election, so we are told.

None of this would ever have happened if the American people were paying attention.  The people erroneously think that they can live their lives in a protected bubble without regard to the immense power that government holds over them.  The people’s total contribution and involvement to the Republic is to vote for the same guy or gal, every election cycle.  Because of that, true representative government is dead.