Rep. Greene is a Victim of Kevin “McCarthyism”

Back in 2010, my group America’s Survival, Inc. held a news conference urging Congress to revive the House Internal Security Committee, the successor to the House Un-American Activities Committee (HUAC). Then-Republican Rep. Steve King of Iowa was asked if he would support the “re-creation of such committees” and answered, “I would. I think that is a good process and I would support it.” If Republicans had followed his advice, they might not be in the minority and facing a Marxist majority in Congress today. 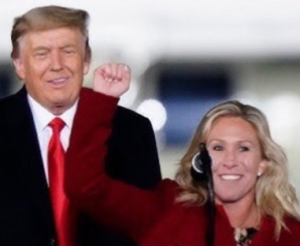 King was eventually forced out of Congress by current House Republican Leader Rep. Kevin McCarthy because King was outspoken in support of saving Western civilization and opposing open borders and multiculturalism. McCarthy is now trying to accede to Democratic Party demands to censor and even expel Rep. Marjorie Taylor Greene, a Trump supporter.

Raising the possibility of a high-level sex ring operating in the world today means that you are immediately attacked as a QAnon conspiracy theorist. That’s what is happening to Rep. Marjorie Taylor Greene. We are told that some of her old social media posts seemed to indicate sympathy for the QAnon “conspiracy theory.” Other controversial statements have also been dredged up.

Tucker Carlson notes, “The media wants you fixated on Marjorie Taylor Greene. You should ask why.” It’s because the Democrats want to divert attention away from other more serious and even sinister issues involving top Democrats.

Greene is really under attack because she has dared to file impeachment charges against Joe Biden, “the Big Guy” in the Hunter Biden emails.  The charges include the report that “Hunter Biden paid nonresident women who were nationals of Russia or other Eastern European countries and who appear to be linked to an ‘Eastern European prostitution or human trafficking ring…’”

Meanwhile, John Weaver, a political operative who co-founded the anti-Trump group the Lincoln Project has been implicated in homosexual/pedophile activity. Even the New York Times has taken note of his alleged role as a sex predator who groomed young men. One victim was a14-year-old kid.

A married father of two, he now says, “The truth is that I’m gay.” He is clearly sick and an example of the sickness that pervades society.

Former President Trump, during the campaign, referred to people who believe in QAnon as being opposed to pedophilia. Many people recognize this sickness in society and want it investigated and prosecuted.

Is there any reason to believe these activities exist or that actual conspiracies of such people are being protected by top government officials? Apart from the John Weaver case, have you ever heard of Jeffrey Epstein? He died under mysterious circumstances in a federal jail and his sex tapes are in somebody’s hands.

Child pornography and human trafficking are some of the worst evils in our society and the world. They exist because they are being protected by powerful people.

What’s more, as my group documented, former President Barack Hussein Obama was mentored by a communist sex pervert by the name of Frank Marshall Davis, who served as a father figure. Davis, who died in 1987, was a heavy drinker and marijuana user who wrote a pornographic novel, Sex Rebel, disclosing that he had sex with children, including a 13-year-old girl. In a poem, Obama wrote about “Pop,” with strange lines about stains and smells on shorts, that Obama biographer David Maraniss confirmed was Davis. Writer Jack Cashill noted the poem has definite “sexual overtones.”

Rep. Marjorie Taylor Greene is accused of believing in a strange conspiracy theory while the Biden Administration and many Democrats believe in a so-called “transgender” theory of human life holding that men can be women and vice versa. Even the liberal pope has rejected this nonsense, a form of DNA denial.

But if you refer to the facts about biology and science regarding men and women, you can run the risk of being censored by Big Tech, a cesspool of odd-ball views.

As I argued in a previous column, Rep. Greene has identified the right enemies, including George Soros. But her critics argue that criticism of Soros is anti-Semitism. This is ridiculous. Soros promotes transgenderism, among other theories designed to undermine our Judeo-Christian civilization.

In terms of high-level sex predators, I noted the following:

Amy Berg exposed the cover-up of pedophilia in the Catholic Church in her 2006 Oscar-nominated documentary, “Deliver Us from Evil,” and followed with her film, “An Open Secret,” about how pedophiles operate in Hollywood and cover up their crimes. The Boston Globe exposed a series of sex crimes committed by Catholic priests in an award-winning series of articles made into a film, “Spotlight,” available on Netflix.

In this context, the Kevin McCarthy brand of “McCarthyism” being pursued against members such as Marjorie Taylor Green looks like a cover-up. Perhaps he ought to revisit the case of Dennis Hastert, now a convicted felon.

He is being urged to pursue his destructive course by conservative journalists such as Tyler O’Neil of PJ Media and Daniel Greenfield of Frontpage Magazine. I recently confronted O’Neil about this matter on an edition of America’s Survival TV. You can watch the interview here and draw your own conclusions.

CNN, the anti-conservative “news” organization, is gloating over the fact that, in an op-ed in Frontpage magazine, “a Trump-loving publication affiliated with longtime activist David Horowitz,” editor Daniel Greenfield also attacked Greene.

The attacks are based on out-of-context material usually dredged up by left-wing groups from old social media posts.

It’s sad and strange to see conservative journalists play these political games when the Democratic Party tolerates open Marxists in its ranks and nothing is done about it.

Big Tech, of course, is also playing a role. When I posted the video of my interview with Tyler O’Neil, during which we discussed the QAnon theory, YouTube added a Wikipedia entry insisting the theory was disproven and evidence of “cult activity.” That’s to be expected from Big Tech, which itself functions like a destructive cult.

Perhaps those conservatives joining left-wingers attacking Rep. Greene ought to get to the bottom of what’s happening with international human trafficking and pedophile rings before coming to any firm conclusions about whether aspects of the QAnon “conspiracy theory” are true or not.