It’s the summer of 2018 and many children are at home enjoying a school break. It’s a good time for family gatherings and family discussions. Summer will eventually come to a close, and moms and dads across America will have to send their children back to school in the fall.

Many parents of faith know that their children are being taught non-Judeo-Christian values in the school systems, namely that homosexuality and heterosexuality are both equal and perfectly normal. But many parents and grandparents and other guardians of today’s children don’t know how to protect their children from the poisonous doctrines of sexual immorality and homosexuality that they are receiving in the public schools.

Not everyone can homeschool or afford to place their children in private schools.

What else can be done?

You can contact your local school board and see if they will listen. Fat chance. 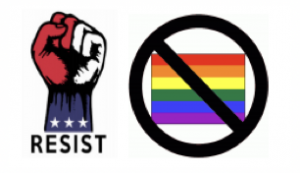 You can contact your local congressman / congresswoman to see if he / she will take action to protect the children. That would be an exercise in futility.

What else can one do?

PROVERBS 22:6 (NKJV):
Train up a child in the way he should go, and when he is old he will not depart from it.

Because of the perverse culture in America, today’s children need to be informed on sexuality much sooner than many parents would like them to be.

Either parents and guardians will train up their children or the culture will. This is a spiritual war and the LGBT people are coming for the children.

The following article will help America’s parents and grandparents to train up their children in righteous sexual morality.

For a pdf printout of this article, click here.

This article has been prepared for you to refute the indoctrination, lies, and propaganda of the LGBT agenda and the equality in gay sex and marriage teachings that kids have been receiving in the public school system as part of their “education.”

On June 26, 2015, in a divided 5-4 ruling, the United States Supreme Court defied Almighty God by ruling that same-sex couples can marry nationwide. Up until recently, marriage has always been rightly understood to be a union between a man and a woman. The U.S. Supreme Court can defy God, but they cannot overrule the Supreme Ruler of the Universe. God has already issued His instructions on what marriage is and has rendered His rulings on those who pervert His instructions on marriage.

God created man and then created a woman, to be a comparable helper and sex partner for man.

GENESIS 1:27 (NKJV):
God created man in His own image; in the image of God He created him; male and female He created them.

GENESIS 2:18,24 (NKJV):
And the Lord God said, “It is not good that man should be alone; I will make him a helper comparable to him.”
Therefore a man shall leave his father and mother and be joined to his wife, and they shall become one flesh.

Jesus (Yeshua), in the New Testament, also confirmed that marriage was between a man and a woman.

MATTHEW 19:4-5 / MARK 10:6-8 (NKJV):
Jesus (Yeshua) said to them, “He who made them at the beginning ‘made them male and female,’ and said, ‘For this reason a man shall leave his father and mother and be joined to his wife, and the two shall become one flesh’”

What does God through the Bible say about two gay or lesbian people having sex and / or marrying?

LEVITICUS 18:22 (NKJV):
You shall not have sexual relations with a male as with a woman. It is an abomination.

LEVITICUS 20:13 (NKJV):
If a man has sexual relations with a male as he does with a woman, both of them have committed an abomination.

Abomination: something regarded with disgust or hatred.

Homosexuality is something God has declared and ruled as disgusting. Over the course of the last few decades, agenda-driven homosexual advocates and their puppet politicians have been working tirelessly to change public opinion on the issue of homosexuality.

The LGBT agenda did not stop in 2015; it is ongoing. The goal? Total societal traditional family breakdown, increased sexual promiscuity, and sexual immorality mixed with sexual orientation identity confusion. They want to shape children’s minds in schools, where kids are trapped in a confined environment and have to listen to and comply with their teachers. The LGBT people are going after kids when they are learning in school, when kids are impressionable and vulnerable.

What about transgenders who identify with being the opposite sex and feel that they are trapped in the wrong body?

Transgenders were once rightly ruled as being mentally ill and received medical treatment. Due to political pressure, American society has catered to the mentally ill transgender persons, appeasing them in their depraved state of mind, rather than getting them the mental treatment that they need.

DEUTERONOMY 22:5 (NKJV):
A woman shall not wear anything that pertains to a man, nor shall a man put on a woman’s clothing, for all who do so are an abomination to the Lord your God.

JEREMIAH 13:23 (NKJV):
Can the Ethiopian change his skin color or the leopard its spots?

Just as a man cannot change his skin color and a leopard cannot change its spots, no man can become a woman and a woman cannot become a man. There is NO SUCH THING as a sex change operation, because the person who undergoes such an operation does not have their sexual gender changed, but mutilated. Any person who has gone under a sex change operation is a perverted, walking, talking, living, and breathing abomination.

Why are educators teaching children the LGBT agenda, something that is evil, as good?

Teachers with higher moral standards have been systematically rooted out of the public school system through education bureaucrats. Teachers are forced to comply with the state-controlled LGBT curriculum. If a teacher refuses to teach children the LGBT lifestyle as being normal, healthy, equal, and acceptable, then that teacher will be forced to resign. The education bureaucrats control what children learn in school and they control who they hire and keep employed to teach the children.

ROMANS 1:22-27 (NKJV):
Professing to be wise, they BECAME FOOLS…
Therefore God also gave them up to uncleanness, in the lusts of their hearts, to dishonor their bodies among themselves, who exchanged the truth of God for A LIE…

For this reason God gave them up to vile passions. For even their women exchanged the natural use for what is against nature. Likewise also the men, leaving the natural use of the woman, burned in their lust for one another, men with men committing what is shameful, and receiving in themselves the penalty of their error which was due.

Jesus (Yeshua) has also issued a ruling on educators, those who are confusing children about the truth, to those who are teaching and corrupting impressionable kids to sin and accept evil.

MATTHEW 18:6 (NKJV):
“Whoever causes one of these little ones who believe in Me to sin, it would be better for him if a millstone were hung around his neck, and he were drowned in the depth of the sea.”

God is the Lawgiver, and His laws and rulings do not change. Homosexuality and all other related sexual perversions are an abomination and they will remain an abomination. No court of man or any schoolteacher can overrule God.

JAMES 4:12 (NKJV):
There is one Lawgiver, who is able to save and to destroy.

Youth of America, REBEL and RESIST! DO NOT be deceived by the indoctrination of the LGBT agenda, what your educators are teaching you in school. Their goal is to ensnare you into a sexually perverted lifestyle, which is an abomination to Almighty God, and deny you the blessings of sex and family through marriage, which have been ordained by God to be exclusively between a man and a woman.