Responsible American Taxpayers Are Just A Bunch Of Dumb Suckers

“Taking care of those who are TRULY in need is an act of human compassion and is worthy of our values.  But where is it written that responsible, productive and self-reliant, tax-paying Americans must pay for those people that are negligently and grossly irresponsible ….. or illegal?”  —Ron Ewart

America has become infected with the disease of irrational compassion, enforced at the point of a gun.  There appears to be no cure for the disease.  It seems that the government and Socialist Democrats have convinced us that we must take care of every Tom, Dick and Mary who can’t get control of their lives, no matter what affliction besets them.  And of course we must take care of the millions of those poor, hapless souls that “drift” across our border (illegally) with little to no education, can’t speak English, carrying with them diseases we have eliminated years ago, bearing the scars of poverty, with no intention of assimilating into American culture.

But that’s not all!  How do you like paying for the food, clothing, shelter, cell phones and plasma TV for millions of women who give birth to millions of fatherless babies, women that don’t have the resources to support the children they bear?  According to the National Center for Fathering, over 20,000,000 children live in fatherless homes in America.  Over 70% of Black women give birth to fatherless children they can’t afford, increasing the poverty, crime and chaos in their communities.

The Kids Count Data Center has chronicled the number of fatherless children by race in 2017.

The responsible, productive and self-reliant, tax-paying American is paying for the support of the 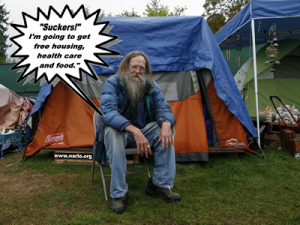 But the egregious draw on the American taxpayer hardly ends with fatherless children.  What is the cost of irresponsible drug and alcohol abuse on the taxpayer?  The National Center on Addiction and Substance Abuse pegs the annual cost to the public of drug and alcohol addition at an estimated $500,000,000,000.  That works out to over $1,500 for every man, woman and child in America.  But since not every man, woman and child in America pays taxes, the burden on the taxpayer is much higher.  The IRS reports that there are 139,600,000 taxpayers that file taxes every year and they pay around $1,370,000,000,000 in taxes.  If you divide the cost of drug and alcohol addiction on existing individual taxpayers, the amount comes to $3,582 per taxpayer.  Once again, why are you responsible to take care of and pay for irresponsible people that have no personal self-control?  Because government says we are obligated to do it and if we don’t, we go to jail.  And we call that freedom?

Let’s take a look at welfare spending.  The “usgovernmentspending.com” website pegs total welfare spending at $1,137,000,000,000 (that’s trillion) with $688 Billion in Medicaid and $449 Billion in other welfare.  Obviously, these costs overlap into the cost of fatherless children and other society ills.  Nevertheless, welfare spending is one fourth (1/4th) of the total annual U. S. budget of $4.1 Trillion.  One might ask, are there really that many poor people in America that can’t make enough money to live on?  And if so, how can that be in the richest country on the planet?  It is a direct sign of the self-destruction of the human culture and society as a whole, institutionalized by government’s and Social Democrat’s policy of irrational compassion.  But under the government doctrine of irrational compassion, we have to do it.

Of course it doesn’t end with fatherless children, drug and alcohol addiction and welfare, does it?  We have people illegally gushing across our southern border by the tens of thousands per month because our irresponsible and incompetent government can’t seem to get control of the situation.  If government can’t secure our borders, why are we paying them?  Because government says we are obligated to pay them and if we don’t, we go to jail.  And we call that freedom?

“A continually growing population of illegal aliens, along with the federal government’s ineffective efforts to secure our borders, present significant national security and public safety threats to the United States. They also have a severely negative impact on the nation’s taxpayers at the local, state, and national levels. Illegal immigration costs Americans billions of dollars each year. Illegal aliens are net consumers of taxpayer-funded services and the limited taxes paid by some segments of the illegal alien population are, in no way, significant enough to offset the growing financial burdens imposed on U.S. taxpayers by massive numbers of uninvited guests.”

“At the federal, state, and local levels, taxpayers shell out approximately $134.9 billion to cover the costs incurred by the presence of more than 12.5 million illegal aliens, and about 4.2 million citizen children of illegal aliens. That amounts to a tax burden of approximately $8,075 per illegal alien family member and a total of $115,894,597,664. The total cost of illegal immigration to U.S. taxpayers is both staggering and crippling. In 2013, FAIR estimated the total cost to be approximately $113 billion. So, in under four years, the cost has risen nearly $3 billion. This is a disturbing and unsustainable trend.”

As an American taxpayer, why on God’s Green Earth should you have to pay for illegal aliens who break our laws to come here and then jump on America’s compassion (taxes you are forced to pay) to the tune of billions of dollars every year ….. and growing?  Every one of them should be deported now, even if it hurts them and us, if we are to ever bring stability and predictability to our laws.  Otherwise, our nation of laws is a fantasy.  Why should legal Americans have to obey the law, but non-citizens can ignore the law?  Because government says we are obligated to do it and if we don’t, we go to jail.  And we call that freedom?  This lawless government policy is insane and hardly equal treatment under the law!

The current estimate of the world’s population is 7.6 billion.  Of that 7.6 billion, nearly one half — over 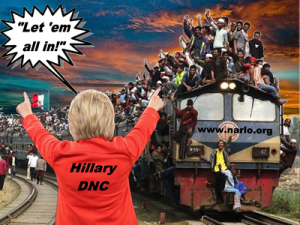 3 billion people — live on less than $2.50 a day.  More than 1.3 billion live in extreme poverty — less than $1.25 a day.  1 billion children worldwide are living in poverty.   Exacerbating the poverty are huge populations living under vicious dictators, or are the victims of brutal wars.  At only 4.3% of the total world population, America can’t be the safe haven for half the world’s population who are poor, or are victims of poverty, famine and war.  IN SPITE OF WHAT THE SOCIALIST DEMOCRATS ARE TELLING US, WE CAN’T LET THEM ALL IN WITHOUT SINKING OUR OWN SHIP ….. NOR SHOULD WE!

We haven’t even begun to talk about the waste, fraud, abuse and corruption in government.  We haven’t talked about the bureaucratic deep state that has more power to affect public policy than the legislators or the voters.  We haven’t even approached the “establishment” of well-connected politicians, bankers and bureaucrats that somehow have found a way to control our education, our land, our food, our water, our health care ….. and our money and turned the American people into nothing more than mindless puppets on a string.

Meanwhile, while you are being forced to pay high taxes to support all these tens of millions of irresponsible people, politicians, their spouses and off spring are profiting big time.  Joe Biden’s son, Hunter Biden, is a case in point.  His dad, while being Vice President, had some of the responsibility for Ukraine and China foreign policy.  Joe made many trips to both countries, with Hunter in tow.  Somehow, as if by magic, huge sums of money (millions) started pouring into Hunter Biden’s bank account.

Of course you all know by now that DOJ Deputy Assistant Attorney General Bruce Ohr’s wife worked at Fusion GPS and was taking home a huge salary while preparing the discredited Trump dossier that was used for a FISA warrant against Carter Page, a Trump campaign assistant.  The end of that story is yet to come.  Hopefully, he and she will go to jail, but don’t count on it.

Then again, maybe you haven’t heard about former FBI director James Comey?  It is estimated that his net worth is around $14,000,000.  Just how do you amass $14,000,000 from being a U. S. District Attorney and FBI Director?  It seems that when he left the Department of Justice, he went to work for Lockheed Martin.  As senior vice president and general counsel he earned more than $6,000,000 in compensation in his last year.  What made James Comey worth $6,000,000 to Lockheed Martin?  GOVERNMENT ACCESS! And James Comey’s fingerprints are all over the DOJ’s failure to prosecute Hillary Clinton and the Clinton Foundation.  What was that worth to the Clintons?

Politicians come to Washington DC with barely enough income to support their families (some of them anyway) and they end up walking away from politics with millions in net worth.  Just how does that happen?  The words are “access to money“, billions of money ….. your money.

Ladies and gentlemen, we submit that the much-talked-about coming civil war should not be a civil war at all.  It should be a taxpayer revolt of epic proportions.  Because if there is not a taxpayer revolt, then the “Responsible Taxpaying Americans Are Just a Bunch of Dumb Suckers” dancing to the evil music of the national and international money brokers, corporate industrialists, the Socialist Democrats, the “Establishment” and the Deep State.  Now that really IS dumb!

Americans either stiffen their backs to government tyranny and corruption, or find themselves bent over, wearing the chains of slavery.  They are half bent over now, with their jailor just a few steps behind.

It’s pointless to put out these articles every week when the masses wear the cloak of cowardice and are quite satisfied with being compliant, dumb, taxpaying government puppets.   From our perspective it’s resoundingly disgusting!

We are so disgusted we’ve decided to do something about it!  We’re tired of waiting around for someone to start a major NATIONAL effort towards restoring American freedom in the vision of our Founders.  The fact is, we can save America from committing suicide in just one, or possibly two, election cycles with just two specific, but intense, major actions, implemented on a grand scale.  It would take just a small group of honorable men (or women) to direct a perfectly legal program, along with the willingness of millions of conservative Americans to give up a miniscule portion of their annual earnings.  Putting the powerful concept of “liberty” in the minds of millions of Americans will force the politicians to follow.  If you want to learn about or become part of these two actions, log onto our web page HERE.  Otherwise, enjoy being “A Responsible Taxpaying American Sucker, supporting the irresponsible.”