Rise Up In The Spirit Of Paul Revere

Paul Revere was an American silversmith who took part in the American Revolution as a member of the Boston Tea Party and alerted the Lexington Minutemen before the approach of the British in 1775. Paul Revere has become a household name in America. Revere was a hero, a patriot and a symbol of the American Revolution because he risked his life for the Colonies. Due to his bravery, courage and patriotism, Revere was immortalized by the Henry Wadsworth Longfellow poem (Paul Revere’s Ride). This poem is perhaps the main reason that both are memorialized today.

The cliché that history repeats itself may be true or may be open to debate. But the same events do occur at different times and eras that we sometimes wish our past heroes could come back and rescue us again. We live in an era that could use a few Paul Reveres.

Heroes like Paul Revere never die, they will be remembered forever. Why? Because Paul Revere is the embodiment of the human spirit of freedom. Everyone who holds to that spirit, everywhere, is a Paul Revere. Muslims and their paid for media constantly attack those of us who sound the alarm about Islam, the deadliest ideology in human history and erroneously call us “Islamophobes.” People have no idea that we are at war with an enemy as savage, as voracious and as heartless as the Nazis. 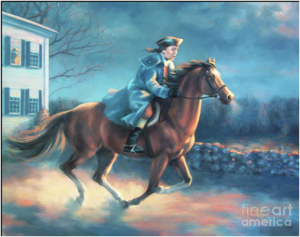 Meanwhile, this enemy is on the march through “stealth jihad,” and it aims to obliterate anything and anyone that stands in its way. Sounding the clarion call about this deadly ideology is not Islamophobia, as many as these apologists claim. A phobia is a baseless irrational fear. Warning of the danger of Islamic ideology is based on irrefutable facts, and it is not only rational, it is ethically imperative.

Iran, the country of my birth, has been at war with Islam for over 1400 years and currently, Iran is under the occupation of the same savages who propagate Islamophobia immediately when you criticize this cult of death. I have been sounding the alarm about Islam’s imminent deadly threat for over three decades. The Islamic treasury flush with oil extortion money together with the help of the left enjoys the upper hand in this battle of survival for freedom. The slaveholder Islam has been transformed into a more virulent form of Islamofascism. It is an inveterate unrelenting enemy of freedom. We need to act now and stem the tide of this deadly threat. Tomorrow may be too late. Freedom is too precious to abandon through complacency, acts of political correctness, or outright cowardice.

We have a saying in Persian that the way you take your first step, points your path for the rest of your journey. To elucidate this, please allow me to elaborate and give a brief account of Islam. 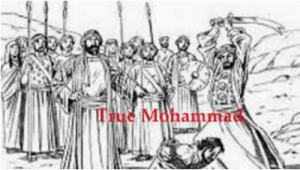 Islam’s very first step was that of violence aimed at the decimation of any people that stood in its path of conquest. It all started with Muhammad when his own Quraysh tribe chased him out of his hometown of Mecca. He was a troublemaker that earned the “crazed poet” epithet.

He escaped from Mecca and settled in Medina where a large tolerant Jewish community lived. There he found enough peace to start his campaign to gather a bunch of thugs with the promise of booty in this world as well as eternal pleasures of a sensual paradise if people followed his edict.

The rest is history. One of the very first things he did was to turn on the Jews of Medina – an easy and convenient target to kill, loot and enslave. Being amply rewarded for this thuggery, his followers expanded their range. To this day, the goal is the same, destroy any and all people who refuse to surrender everything they have to this creed of savagery and slavery.

Islam can justifiably be condemned as a barbaric ideology that has energized and continues to galvanize crimes against humanity. Islam belongs to a raft of doctrines such as Nazism, Fascism and totalitarianism of various stripes that promotes hate and violence against others. Despicable doctrines of hate and violence remain confined to their place under the “shameful” classification in libraries until people adopt them as their program for life. Hence, it is people who are guilty of bringing them to life, the dogmas of savagery.

In the same way that ignorance of the law does not constitute a valid defense in a court of law, not bothering to find out about the true nature of Islamic precepts, practices and blindly following Islam’s bidding, constitutes inexcusable wrongdoing. Muslims, therefore, are indictable for subscribing to the Quran and committing themselves to carrying out its ruthless instructions at great harm to non-believers.

A vast cadre of Islamic apologists, generally from the ranks of the well-pampered parasitic clergy, labor greatly at defending Islam and keeping the masses in servitude. In practice, these sheepdogs of Islam earn their very livelihood by devouring the sheep they herd.

The apologists cover a wide spectrum. On one extreme are the unrepentant and shameless bigots who adhere to and promote every provision of the Quran, the Hadith, and the Sunna. These robots pride themselves on being diehard obedient literal believers of Allah.

Then, there are those apologists who do their best to walk a tightrope. They skillfully straddle a zone with one foot in the Islamic muck and the other out of it. These illusionists—the smoke and mirror artists—are masters of double-speak and are very difficult to pin down. Yet, they are most effective in their work. They manage, through their clever tactics of half-truth-half lies, to keep the faithful in line and fool gullible non-Muslims.

And then there are the sheep— rank – and – file Muslims. They are indictable because they are the ones who keep Islam alive by feeding and supporting it. It is this rank that supplies the Islamic foot-soldiers—those servants of the All Kind and All Merciful Allah who do not have a grain of kindness or mercy in their dark hearts. These easily programmable robots detonate explosive vests not just to kill the kefirs, but to kill even other Muslims. They slaughter innocent kidnapped people as cheerfully as they slash a lamb’s throat. With exhortation passages from the Quran pasted on the wall of their slaughterhouse, they shamelessly fire their katyusha rockets, not at the military but directly at the civilian population.

Are all Muslims the leeching clergy, or actively involved in terrorism and included in the blanket indictment, you ask?

The fact is that being a Muslim is a clear admission of wrongdoing, the extent of which depends on the degree of a person’s Muslim-ness. If he is only a Muslim who does not practice Islam, then he is, at the very least, guilty of hypocrisy. If he is somewhat of a Muslim by tithing, from time to time, following the ranting of the local mullah or imam, and swallowing whole the pronouncements of the high divines, then he is guilty of significantly contributing to the evildoing of Islam.

Lastly, there are those Muslims who simply lack the courage to leave Islam and exercise their gift of humanness. They are the pathetic crowd guilty of remaining in the fold of tyranny and withholding support from the forces of liberty and human dignity. Also, to use an old cliché, if a person is not part of the solution, he is part of the problem. Islam is indeed a huge problem.

Some Muslims have objected to my taking Islam to task and not addressing the atrocities of others, both in the past and in the present. Let me answer that. I do not see myself as an ombudsman for mankind, commissioned either by God or self-appointed. I am not egoistical enough to see myself as a universal arbiter of all wrongdoing. I, however, unreservedly condemn all genocide, religiously-based or otherwise, and all wrongs visited upon any individual or people irrespective of time, place and any other considerations.

My focus is Islam, because I, my people and my native country, Iran, have been victimized by a primitive alien ideology for far too long. Having witnessed first-hand the horrors and indignity that Islamofascim visits on people it subjugates, I have taken it upon myself to do my part in defeating this ideology of oppression, hate and violence.

I enjoy and deeply cherish the liberty that America has generously afforded me, enabling me to raise a cry from the heart regarding the tragic plight of millions of Iranian victims—my compatriots who dare not speak against the wicked mullahs and their mercenaries.

I am the voice of tens of thousands of Iran’s best children, many of them literally children, who have been imprisoned, brutally tortured, shamelessly raped and viciously slaughtered by Allah’s beasts presently ruling Iran.

The heartless religionists of Allah have plundered and continue to plunder the people’s vast oil income, fill their bottomless pockets with the ill-begotten funds, and finance adventurism in Iraq, Lebanon, Palestine, Syria and anywhere and everywhere they find willing clientele.

In the meantime, over the past four decades of their Islam-authorized dastardly theocracy, they have driven masses of the Iranian people to abject poverty. They have created a culture of nihilism and despair that has spawned one of the world’s most drug-addicted societies and have compelled a great many women to sell their bodies in order to survive.

It is, so, I find it both my sacred duty and inalienable right to indict Muslims as either criminals themselves or accessories to the crimes, seek justice, and warn others of the dangers of Islamism in all its forms. I also challenge all Muslims to abandon the demonic cult of Muhammad and join the forces of liberty and justice of free people with no turbaned masters or masters of any kind.

Fellow patriots: It is a crime to remain silent in the face of evil, it is said. Thus, in the spirit of our past American patriot and hero, Paul Revere, I beg, each and every one of you to rise up, speak up and urge other good patriotic men and women of this great nation to unite and defend, protect and safeguard America before this insidious enemy of all persuasions would try to silence us by ever-creeping Islamofascism.