I have put thousands of Americans away for tens of thousands of years for less evidence for conspiracy with less evidence than is available against Ollie North and CIA people. I personally was involved in a deep-cover case that went to the top of the drug world in three countries. The CIA killed it. —Former DEA Agent Michael Levine, CNBC-TV, October 8, 1996. Author of Deep Cover

Former DEA Agent, Michael Levine lost his son, a police officer, and his brother to drugs.  His son was murdered, and his addicted brother committed suicide.  Levine has openly stated that none of these drugs should ever be legalized.  The DEA’s Position on Marijuana is damning and the report is alarming.  Legislators considering the legalization of marijuana should read the report before they vote as their decision may have dangerous consequences in their state.

Nineteen states and Washington, D.C. have legalized medical marijuana and two more, Washington and Colorado, have legalized it for both medical and recreational use, according to this map from Governing magazine. But marijuana is not legal under federal law. 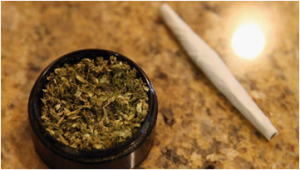 Government power has grown in every direction, often ignoring the very deliberate constraints of the Constitution. But, if we are to entertain the rather unfashionable traditional view of federal power, it is quickly clear that the federal government gets only “enumerated” (or specifically spelled out) powers, and the rest belong to the States and the People mainly via the Tenth Amendment.

Libertarians have long wanted all drugs legalized.  Their mantra is “hands off, don’t tell us what to do.”  But it’s all about them, not about what happens to the rest of society because of them.  Gary Johnson, the former Governor of New Mexico, was the last libertarian to run for President.  He is pro-abortion and for the legalization of drugs.

The High Cost of the “Rocky Mountain High”

At the recent Gathering of Phyllis Schlafly Eagles (PSE) in St. Louis, MO, State Director of Eagles in Arizona, Susan Ellsworth, read a report by the Co-Directors of Colorado’s PS Eagles, James and Jayne Schindler.  It was not only startling, but frightening.

Reefer, pot, Mary Jane, weed, grass, all of these terms refer to Cannabis.  Many deceptive arguments were used to promote medical and then recreational marijuana legislation in the State of Colorado in 2012.  Since then, the use of marijuana has decimated the state in numerous ways few have considered.  Most of the following information comes from the Schindler’s own research.

Essentially, the drug cartels, who have plenty of money, are breeding new marijuana hybrid plants with higher levels of THC and other toxic and addictive chemicals in it.  This is resulting in a much stronger and much more addictive marijuana plant, even though it may look, smell and taste similar to older plants. 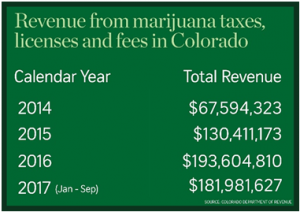 Conversely, the level of CBD, or cannabidiol, the ingredient sometimes touted for its potential health benefits — fell from about 0.28 percent in 2001 to less than 0.15 percent in 2014.

Lunch breaks at schools find kids piling into cars, rolling up the windows and smoking pot.  Re-inhaling the trapped smoke is called “stove-piping,” resulting in a quicker and more intense high.  On their return to the classrooms, they are out-of-control, causing the teachers to be both fearful and unable to teach.

Legalization has impacted the drug cartels, so they have shifted gears and are now enjoying monetary gains from the sales of opioids, now epidemic and causing even more crime.

Dr. Sam Wang of Children’s Hospital said he found that the number of kids and young adults in the emergency room for marijuana-related reasons and who subsequently needed a psychiatric evaluation also increased rapidly — from 65 in 2005 to 442 in 2014.

The tobacco industry actually wants to start packaging joints for over-the-counter sales.  Given the rationale that tobacco smoke is bad for your health, while marijuana smoke is apparently good for you.

Colorado has now collected in excess of a billion dollars in taxes from pot sales which indicates a large portion of the citizenry is high while trying to perform their normal daily functions.

Side Effects and Dangers

Don’t kid yourself, marijuana is not without side effects and dangers.  As much as weed users would like to think that weed is an entirely harmless drug, it really is not. Marijuana use has not only been significantly linked with a number of short-term psychosocial problems – including problems with school, work, family, friends and the law – but has also been linked with several longer-term medical and mental health risks.

If you doubt anything in this article, please listen to this video from Colorado Christian University’s Centennial Institute on their presentation of marijuana’s true impact on Colorado.

Cannabis is still a Schedule 1 drug in the U.S., and that places significant restrictions on scientific research and investigation that can be done with the substance regarding the dangers of marijuana on the body and brain.

The medical community has sounded alarm bells over what long term usage of cannabis can do.  Physicians nationwide were shocked at the JAMA Psychiatry study wherein they were told they needed to change their mind on these issues.  Long-term smoking damages the brain’s capacity for memory and cognitive tasks, and increases the risk for the development of a number of serious health problems later in life.  Link

Please understand, I am not against the medical usage of marijuana, it really has helped many people through horrible treatments, but as Colorado residents have already realized, legalization for recreational use brings a great number of devastating problems.

If your state has a bill in their legislature to legalize this substance for recreational use, be aware that the majority of the legislators have been told it’s a safe product and should be mainstreamed.  Please clue them in to the dangers of this legalization.

P.S.  We are so thankful for so many blessings, including the fact that we have NewsWithViews who daily publishes truth from researchers who love our country and want to make her great again.  The NWVs CEO and publisher works tirelessly to bring the best articles by journalist researchers into your email daily.  We stay alive only because of donations from grateful readers.  Please consider donating to NWVs on a monthly basis to help us make America great again.