Rush is Home in Glory

His lord said to him, “Well done, good and faithful servant; you have been faithful over a few things, I will make you ruler over many things. Enter into the joy of your lord.”  —Matthew 25:23 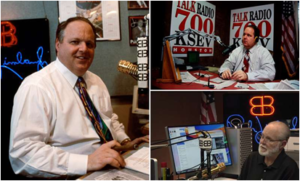 And he believed in the Lord; and he counted it to him for righteousness.  —Genesis 15:6

The King of talk has gone home to glory!  There’s no one who can replace the nearly 33 years of Rush Hudson Limbaugh III, America’s talk radio host extraordinaire.  Amazing guy…and although he was someone we might not always agree with, we loved him throughout his three decades of conservative radio truth.

In 1993, Rush was the invited guest at the National Rifle Association yearly convention in Nashville, Tennessee. As members, we went to see this great fellow speak.  It was held in the Grand Old Opry Land Hotel and gloriously we had front row tables.  We loved it…an amazing event and a wonderful speech from the man who loved freedom.

Here is the video from that speech, and I know you’ll enjoy it as much as we did back then.

Mark Steyn, Ken Matthews, Todd Herman and a couple others have substituted for Rush while he’s had cancer treatments, and all of them have been stellar in replacing the King of talk radio.  If you’ve listened to them, you learned a lot as they were chosen by Rush as stand ins.

November 3rd, we lost one of the best presidents we’ve had in decades, and now we’ve lost one of the finest talk show hosts in America…God called Rush home too early for us, but perfectly timed for the Lord.  God’s will is always perfect, and surely the banquet in heaven for this wonderful Christian man is a glorious event as are all those who come home to the God of Abraham, Isaac and Jacob.

Will substitutes for Rush continue to fill in for the number one voice of freedom and liberty?  I would hope so.  No one can fill the Limbaugh shoes, but a number of wonderful people can help us through these times of trial and I know Rush would love his program to continue.

Bo, whose real name is James Golden, is a call screener, producer, and engineer for the syndicated Rush Limbaugh radio talk show. Since 2001 he has been a Producer/Executive for Premiere Networks, the largest radio syndication company in the United States.

James Golden along with Autry Pruitt and their many friends will continue the work of Rush Limbaugh in areas outside of radio.  They have come together to launch a new web-destination: MAGA.BLACK.

Forty-four million listeners tuned in every day…and it was Rush who told those listeners to help General Michael Flynn with his legal defense fund.  Over 10,000 hits per minute went through the Flynn legal defense fund, and shut it down for a few minutes.  Even Rush’s website, which had never been shut down from hits, went down shortly after he called for support for the General.  Amazing what he did to help!  God bless him!

Yes, Rush was the education teacher…and how many times we heard young adults call into his show and say they had listened since childhood because their parents tuned in.  A great teacher…that’s what we’ve lost, a one in a million fellow that will never be replaced…but God gave him to us for 33 years and for that the nation has been blessed.

Rush’s last breath here was his next breath in the presence of the King of Glory who no doubt said to him, “Well done, good and faithful servant.”

Pray for Kathryn, for the Limbaugh family and for all of the people who loved this man and will miss him and pray for our nation…that’s what Rush would have us do.