Home/National Headlines, October 2017/Russia Bribed And Padded Clinton Foundation To Get Control Of US Uranium

“The FBI confirmed that disgraced former FBI Director James Comey drafted a statement exonerating Hillary Clinton two months before she was even interviewed. Comey knew exactly what he was doing when he launched a phony investigation, preemptively exonerated Hillary Clinton, and leaked classified information to perpetuate the plot against President Trump.” – Tomi Lahren, The Great America Alliance.

The special counsel’s (Robert Mueller’s) investigation into alleged collusion between Russia’s Vladimir Putin and President Donald Trump — to secretly torpedo Hillary Clinton’s presidential dreams — drags on with Mueller’s investigators first having to find an actual crime committed by Trump or his campaign workers. But documents from the Federal Bureau of Investigation not only show political corruption bordering on treason, but they reveal the likely perpetrators included the Clinton family’s charity, the Obama White House, the Justice Department and the FBI.

Federal cops possessed proof that Russian operatives bribed, paid kickbacks and used corrupt tactics in order to allow Russia to control a substantial amount of U.S uranium. However, it was President Barack Obama who ultimately approved a controversial uranium deal benefiting Moscow in 2010, according to a report released by the news media on Tuesday. https://youtu.be/L8x2mbJ7k0E

Tens of millions of dollars from uranium investors flowed into the Clinton Foundation, and Bill Clinton received a $500,000 speaking fee from a Russian bank tied to the Kremlin before Secretary of State Hillary Clinton helped decide whether to approve the sale to the Russian government of a company that held one-fifth of America’s uranium capacity.

The report addresses the allegations from the 2016 election cycle that the Bill and Hillary Clinton used the State Department as their own money-laundering facility. The release notes that Bill Clinton and his family foundation got millions of dollars from executives from a uranium company while 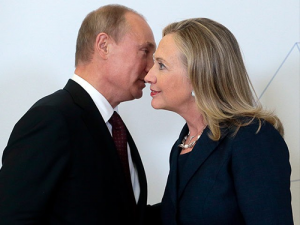 Hillary Clinton led the State Department and served on a panel that helped seal the deal for a uranium sale to a Russian company.

FBI agents gathered evidence – including recordings and emails – as early as 2009 revealing how Vladimir Putin’s government used bribery and kickback-payment in order to gain control of an American firm that transports uranium, considered “precious cargo.”

The Obama Justice Department reportedly conducted a slow-paced investigated that lasted for years, while hiding the details from the American people and their representatives in Congress. During this time the Obama team made two decisions benefiting Moscow.

The first was the selling of Canadian mining company Uranium One to Russia’s Rosatom nuclear company. That sale involved the United States because it bestowed control of part of the uranium supply in the U.S. to the Russians.

The details of the Uranium One deal first emerged in news reports in 2015. Since then, President Trump’s allies have cited the deal – and accusations that the Clintons benefited from figures tied to it — to counter allegations of Russia collusion during the 2016 campaign.

Meanwhile Obama, the news media and the Democratic Party helped Clinton’s campaign by downplaying the allegations:  “No one has produced a shred of evidence that Hillary Clinton ever took action as Secretary of State in order to support the interests of donors to the Clinton Foundation. To suggest the State Department, under then-Secretary Clinton, exerted undue influence in the U.S. government’s review of the sale of Uranium One is utterly baseless. It mischaracterizes the nature of the State Department’s participation in such reviews, and also ignores the range of other regulatory agencies that ultimately supported this sale.”

According to a former federal law enforcement official who spoke to the Conservative Base’s editor, the Obama administration’s Russian-uranium probe was supervised by Rod Rosenstein, who is now overseeing the special counsel probe into the evidence-deficient Russia-Trump allegations.

“Hillary Clinton’s State Department was one of eight agencies to review and sign off on the sale of U.S. uranium to Russia. However, Clinton was the only agency head whose family foundation received $145 million in donations from multiple people connected to the uranium deal, as reported by the New York Times,” reported Breitbart News on Tuesday.

“The State Atomic Energy Corporation ROSATOM is one of the global technological leaders. It is one of the largest companies of the Russian Federation and largest taxpayers of the country.  It brings together nuclear power and power engineering assets, as well as NPP design and construction. ROSATOM is the largest electricity generating company in Russia, producing 196.37 billion kWh of electricity in 2016 (or 18.3% of the country’s total generation of electricity). ROSATOM holds first place for the largest portfolio of foreign construction projects (34 NPPs in 12 countries).

“ROSATOM produces annually approximately 3,000 tons of uranium domestically, and some 5,000 tons in other countries. Raw materials of the Russian and foreign deposits (particularly in Kazakhstan) will be enough to supply both domestic and international projects of Rosatom for the next hundred years.

“ROSATOM brings together over 300 enterprises and organizations, including the world’s only nuclear icebreaker fleet. ROSATOM is tasked with implementing the uniform state policy on the uses of atomic energy as well as fulfilling the Russian Federation’s international obligations on the peaceful uses of atomic energy.”