“We hold these truths to be self-evident: that all men are created equal, that they are endowed by their Creator with certain inalienable Rights; that among these are Life, Liberty, and the pursuit of Happiness…” -The United States’ Declaration of Independence

Did you hear the deafening sounds of silence at the Golden Globes bash this past Sunday where the hordes of self-proclaimed champions of women’s rights busily applauded each other and didn’t bother to say a single word in support of valiant Iranian women presently risking everything to be free from Islamic fundamentalist misogyny while they threw away their Hijabs?

Indeed, it is times like this when principled freedom fighters are separated, by their words and deeds, from Hollywood frauds. 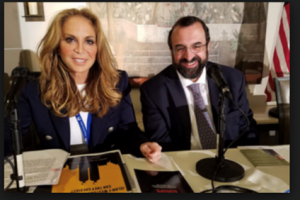 People such as Pamela Geller and Robert Spencer, have set themselves apart from the shameful gang of self-serving loudmouths who find themselves suddenly tongue-tied when speaking up does not serve their myopic and parochial agenda. If President Trump is for it, they are against it, no matter what.

I am certain that I speak for millions of severely tormented Iranians, where women in particular are subjected to unbelievable atrocities, in thanking you. You are true friends of freedom. You are standing with the people of Iran in their life and death struggle. We thank you for your support.

In my opinion, the liberty-loving people of America and the world owe a debt of gratitude to Pamela and Robert, for valiantly exposing the racist and supremacist nature of the barbarity of Islam, for fearlessly braving where others dare not tread, and for passionately defending freedom of speech, rights of the individual and oppressed people of the world.

Both Pamela Geller and Robert Spencer have been sounding this alarm from the very beginning about the true nature of radical Islam and jihadists’ imminent deadly threats to our way of life and American values. While America is the last haven of hope where liberty can reign, Islamic jihadists draw heavily from their treasury flush with oil extortion money to bribe politicians and hire mercenaries to further their evil objectives.

In my opinion, both Pamela Geller and Robert Spencer are true heroes. They stand for all that is dear to free people. They are in stark contrast to the masses of the politically correct, the apathetic, and the hired Islamic apologists.

It is noteworthy that their work not only serves what is right, it also serves the best interests of America and all of humanity. It proves to the world that these two-liberty loving cherish and support freedom and the rights of all people to speak freely.

“Where are the champions of … what did they call it? Oh yes, the “Arab Spring” — that great euphemism for the oppressive Islamic supremacist movement that sought to overthrow secular rule for the vicious and brutal and sharia. Here, now, when a genuine movement for freedom takes hold in a viciously oppressive Muslim country, the left stands with the murderers and oppressors. The media, aligned with the jihad force, will never report fairly or even remotely accurately on these matters, as they are the tip of the spear of the anti-freedom, anti-American fifth column in this country.” Pamela Geller

Sadly, during these times of great peril, truth is sacrificed by the politically correct, the myopic self-serving in the liberally dominated media, and the ruling class.  Against this backdrop, two people of great courage and integrity labor tirelessly in speaking the truth and in the defense of liberty.

As US Ambassador to the UN, Nikki Haley, said it beautifully: “We must not be silent. The people are crying out for freedom. All freedom loving people must stand with their cause. The international community made the mistake of failing to do that in 2009. We must not make that mistake again.”

On behalf of all freedom loving Iranians, I want to say: Thank you. Thank you for reporting the Truth while the MSM blocked the accurate flow of news from reaching the public. Thank you for standing with the valiant Iranian people.

Both Robert Spencer and Pamela Geller are champions of freedom, liberty and human rights. They rightfully deserve to be nominated for the Nobel Peace Prize. I am honored to call them my friends.