MYRA – (Note To Readers: This story was first published on December 20, 2001. It has been picked up and re-published all over the world every year since, becoming a Holiday Tradition. Hallmark contacted the writer and asked him to appear in the Holiday movie, Single Santa Seeks Mrs. Claus, playing the Mall Santa that magically receives the gift of sign language. That movie is aired every year.)

He is loveable, congenial, giving and jolly. What’s more he knows everything, as any child will readily testify. He is a colorful old man, whose visits are eagerly awaited by millions of children each year and who, for a little while, makes the world a much happier place
Is Santa Claus a good influence on children, or a bad influence whose image merely commercializes Christmas and who takes the reason out of the season, as some charge?
Where did Santa come from? It will surprise many to learn that Santa Claus (as we know him today) came out of the church itself through the charity of a very devout and caring priest. Now bear in mind that this is a true, historically documented account. 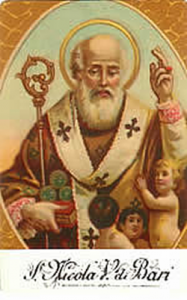