It was the end of the Obama era, a presidential administration best known for lying-with-a-smile to the American public, fully supported by a leftist media who painted a rosy picture of everything this “historic” 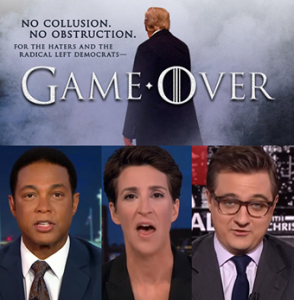 president screwed up during his tenure. A brief list of the Obama administration failures would include a no growth economy marked by negative economic indicators such as high unemployment, record federal deficit spending, and a massive increase in food stamp recipients throughout the nation; a weakened military with a president who aided and abetted America’s foreign enemies topped off by a final act in office of sending $150 billion in cash on wooden pallets to Iran; a complete disaster of a federal healthcare plan known as Obamacare;  a pay-for-play corrupt administration that rewarded its political donors and weaponized various government agencies to harass and prosecute conservatives and any political opponents, and a regime that gleefully oversaw the further moral decline of the nation, lighting up the White House in rainbow colors to support the U.S. Supreme Court’s decision to legalize same-sex marriage on June 26, 2015, as soon as the decision was announced.

After all these failures, the leftist media kept telling us that these were successes, and now we were going to continue as a nation down this road and break new ground, by electing Hillary Clinton as president. This was going to be historic, the mainstream media told us, and the 2016 presidential election turned out to be historic, but the mainstream media did not share the enthusiasm held by the American public when America elected its first businessman, Donald J. Trump, a man who had never previously held an elected public office, to become the 45th president of the United States! 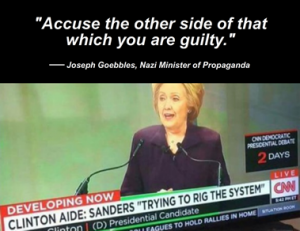 Hillary Clinton was supposed to win, grumbled the leftist media. They rigged the narrative, they rigged the polls, they rigged the election (as best as they could), they informed the American people that Hillary could not lose, and they, as Democrat operatives, were all-in the tank for Hillary. On November 8, 2016, Donald Trump and Mike Pence were elected president and vice president of the United States respectively. But Hillary Clinton was supposed to win, grumbled the Democrat operative leftist media. They just couldn’t let it go.

So, they did what Democrats do… they employed Saul Alinsky Rules for Radical tactics by initiating a phony criminal investigation into Donald Trump, claiming he colluded with the Russians to “steal” the 2016 presidential election.

“Accuse the other side of that which you are guilty.” – Joseph Goebbels, Nazi Propaganda Minister

In spite of all the evidence that Hillary and Bill Clinton colluded with the Russians in the Uranium One deal, and Hillary Clinton and her Democrat operatives rigged the 2016 Democrat primary – stealing the Democrat nomination from Bernie Sanders, and Barack Obama was caught on a hot microphone saying to Russian President Dmitri Medvedov that he would have more flexibility to negotiate on missile defense systems after the 2012 election, it was duly elected President Donald J. Trump who was investigated for colluding with the Russians to steal the 2016 presidential election!

“Show me the man, and I’ll show you the crime.” – Lavrentiy Beria, head of Joseph Stalin’s secret police

After an exhaustive witch hunt investigation by Robert Mueller, based on no probable cause or evidence, the Mueller report concluded that Donald Trump did not collude with the Russians to steal the 2016 presidential election.

Ah, but wait, say the Democrats. We believe that President Trump obstructed the Mueller investigation!  Democrats are saying, with a straight face, that President Donald Trump, the man who has been undoing the havoc left by his predecessor Barack Obama, is guilty of obstructing justice by merely defending and declaring himself innocent from the attempted coup d’état, that the Democrats, their operatives in the Deep State, and the leftist media have tried to foist upon the American people!

In the words of the late, but not-so-great lawyer for O.J. Simpson, “If the gloves* don’t fit, you must acquit.”

*In the murder case of O.J. Simpson, the gloves actually did fit.

If there is no underlying crime, there can be no obstruction of an investigation for a crime that does not exist. 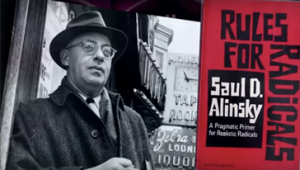 Saul Alinsky (Democrats, Deep State, leftist media) meet the Boy Who Cried Wolf. We the American people have listened to your lies for many years now. Democrats and the leftist mainstream media have cried wolf far too many times, and no rational person believes them any longer. National network newsrooms have been overrun by LBGT agenda-driven advocates who cannot possibly offer unbiased viewpoints of an alpha male conservative, President Donald J. Trump.

Pray for our 45th President of the United States, Donald J. Trump! May God bless him, keep him safe, and guide him with the wisdom he needs to keep America great and to overcome the leftist wolves who relentlessly attack him and want to turn America into a communist hellhole.