In 2010, my book THE POWER ELITE AND THE SECRET NAZI PLAN was published. In it, I wrote that the secret Nazi plan to take over the world was to come to fulfillment in 2 generations after World War II. That is now, but people don’t recognize it!

A dialectical process was used for many years to synthesize Western capitalism and Eastern communism into a World Socialist Government. As I wrote in my book, before such a government could come to fulfillment, each nation would have to become Socialist first, and that is what the word Nazi means—National Socialist Workers Party.

Relevant to the U.S., the plan required that this country first be torn apart in terms of its values and culture to prepare the way for Biblical End Times. If one tears at the fabric of a society long enough, its center cannot hold. In 1919, the famous poet William Butler Yeats wrote “The Second Coming” using Christian imagery concerning the Apocalypse and Second Coming of Christ. The poem begins with these words:

Turning and turning in the widening gyre
The falcon cannot hear the falconer;
Things fall apart; the centre cannot hold;
Mere anarchy is loosed upon the world,
The blood-dimmed tide is loosed, and everywhere
The ceremony of innocence is drowned;
The best lack all conviction, while the worst
Are full of passionate intensity.”

Look around you at the violence and the loss of moral conviction by many, especially millennials who are largely self-absorbed. As The Holy Bible described the future, “The love of many shall wax cold” (Matthew 24:12). Where is their innocence, as sexual promiscuity and abandonment of Biblical admonitions against fornication have become commonplace? 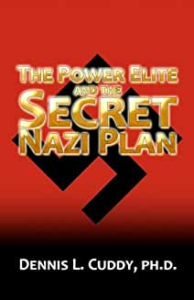 For the secret Nazi plan to be fulfilled, chaos must occur, fulfilling the centuries-old desideratum “Ordo ab Chao!” (Order out of Chaos). The New World Order (NWO) has been pursued by the Power Elite (PE) for centuries and is politically bipartisan. Just as President George H.W. Bush became known for his use of the term NWO, President-Elect Joe Biden in his address to the Senate Foreign Relations Committee on January 13, 1993 proclaimed his desire to pursue a NWO. Joe Biden was vice-president under President Barack Obama, who on April 5,2009 delivered a speech in Prague concerning the growth of terrorism, warning that “we could reach the point where the center cannot hold.” Barack Obama was a follower of Saul Alinsky who had an Acknowledgment to Lucifer at the front of his book, RULES FOR RADICALS, in which Alinsky advocated “fanning the latent hostilities” and “rubbing raw the resentments” of communities, which we see now being played out in the recent rioting in cities like Portland, Oregon.

Near the beginning of chapter 20 of my book concerning the secret Nazi plan, I wrote that according to American government official Sumner Welles’ THE TIME FOR DECISION (1944), “it would work in three principal ways: (a) It will try to create doubts among the people of each country as to the ability, integrity, wisdom, or loyalty of their leading statesmen; (b) in critical moments it will attempt to paralyze or to diminish the capacity for cool thinking by the people as a whole; and (c) it will search each country for men who, through ambition, vanity, or personal interest, will be disposed to serve the causes….When the right time comes, stimulate internal dissention sufficiently to destroy the morale of the people in those countries marked as victims.” Doesn’t this sound like today?

Zbigniew Brzezinski (ZB) has been a top political adviser to Presidents Carter, Clinton and Obama. He wrote a book, BETWEEN TWO AGES, in 1970 in which he praised Marxism and wrote about the coming Technozoic Era as follows: “In the technotronic society the trends seem to be toward…effectively exploiting the latest communication techniques to manipulate emotions and control reason….Human beings become increasingly manipulable and malleable…the increasing availability of biochemical means of human control…the possibility of extensive chemical mind control….A national grid that will integrate existing electronic data banks is already being developed….The projected world information grid….”

Geopolitically, I quoted PE agent ZB stating at Mikhail Gorbachev’s first State of the World Forum in 1995 that the plan for a world government would link regional economic arrangements. I also mentioned that the final link would be a Middle Eastern Union, which at the time was thought to be impossible. However, recently Israel has reached economic arrangements with the United Arab Emirates (UAE), Bahrain and Lebanon. Israelis would do well to remember, however, that Ezekiel 13:16 prophesized “the prophets of Israel which prophecy concerning Jerusalem, and which see visions of peace for her, and there is no peace, saith the Lord God.”

What’s next for America and the world? Luciferian Alice A. Bailey in her writings emphasized a “new world order” and “points of light.” She also wrote a pamphlet, “The Next Three Years (1934-1935-1936),” in which she revealed that the “outer form” of the “World Federation of Nations” will be “taking rapid shape” by 2025, and that one should “not infer by this that we shall have a perfected world religion and a complete community of nations. Not so rapidly does nature move, but the vision and the idea will be universally recognized, universally desired, and generally worked for. When these conditions exist, nothing can stop the appearance of the ultimate physical form….Approximately 400 men and women are working consciously with the Plan.”

To bring this to fulfillment, the series of crises that began with the terrorist attacks of 9/11/2001 will continue. In my 1991 book, NOW IS THE DAWNING OF THE NEW AGE NEW WORLD ORDER, I wrote that Dr. Richard Day (a former medical director of Planned Parenthood) in a March 1969 speech in Pittsburgh announced that in terms of controlling population, “Everything is in place, and nobody can stop us now….This time, we’re going to do it right.” He further said “hard-to-cure diseases would be created,” and there would be a new world religion and “terrorism would be used to make people demand international controls; and economic interdependence would help lessen national sovereignty, as people would become citizens of the world.”

Before the terrorist attacks of 9/11, Americans greatly valued their freedom. However, the afternoon of the attacks, ABC News/Washington Post released survey results showing two-thirds of Americans would be willing to sacrifice some freedoms for peace and security! Government controls concerning air travel went so far as to require the inspection of elderly women’s shoes before they could board a commercial airliner !

These government controls continued with the current Covid-19 crisis, as people across the world are required to wear masks, obey curfews, and be quarantined. On May 28, 2018 (8 months before the first case of Covid-19 was found on November 17, 2019 in Wuhan, China), Moderna (whose Covid-19 vaccines are now being distributed across the U.S.) amended a previous patent application and included the following words: “Because of a concern for re-emergence or a deliberate release of the SARS coronavirus, vaccine development was initiated.” The Bill and Melinda Gates Foundation is listed by Moderna as one of its “strategic collaborators.” And remember that in 2015, Bill Gates delivered a Ted Talks saying the following: “Today the greatest risk of a global catastrophe doesn’t look like this (picture of war). Instead it looks like this (picture of a virus). If anything kills over 10 million people in the next few decades, it’s most likely to be a highly infectious virus rather than a war. Not missiles but microbes….You can have a virus where people feel well enough while they’re infectious that they get on an airplane or they go to a market. The source of the virus could be a natural epidemic, or it could be bioterrorism….It would spread throughout the world very, very quickly….”

Further government controls will be implemented with each new crisis that occurs until the secret Nazi plan is brought to fruition as part of the PE’s larger plan for a World Socialist Government. As Robert Hugh Benson wrote in his 1907 book, LORD OF THE WORLD, about the future: “…Esotericism is making enormous strides….Patriotism has been dying fast ….The new era has begun….Party must unite with Party, country with country, and continent with continent….Persecution was coming….It involved all the stupendous force of Socialism….America was powerless….This appearance of peace has deceived many….The world is one now, not many. Individualism is dead….For anyone to say that they believe in God—it is high treason….” May God help us and have mercy on our souls!