Works which endure come from the soul of the people. The mighty in their pride walk alone to destruction. The humble walk hand in hand with Providence to immortality. Their works survive.  —President Calvin Coolidge

Jeff Sessions, the Attorney General’s office, and the United States Justice Department are not going to appoint a special counsel to investigate anything as it relates to what went on with the Obama FBI, Hillary Clinton, the Uranium One deal, Pay to Play, missing emails, James Comey and the FBI’s leftwing partisans who set in motion the phony Trump/Russia collusion.  He sent a letter to the Chairmen of both the House and Senate Judiciary Committees.

The AG sites the regulations as it relates to special counsels.  “Pursuant to DOJ regulations, the appointment of a special counsel by design is reserved for use in only the most extraordinary circumstances.  The public interest would be served by removing a large degree of the responsibility for the matter from the DOJ. The Department has successfully investigated and prosecuted many high-profile resource intensive matters since the regulations were promulgated in 1999, but the regulations standard had been found to be satisfied on only two occasions.”

And guess what one of those two occasions was!? The appointment of the special counsel to investigate President Donald J. Trump. 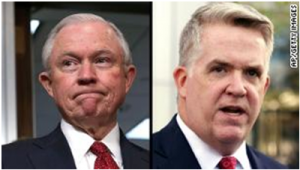 Sessions has had several federal prosecutors monitoring and reviewing the matters at issue here.  He has now named one of them, United States attorney John Huber of Utah an Obama apointee.  Huber was appointed by Sessions to investigate the FBI’s surveillance of Carter Page and connections between the Clinton Foundation and Uranium One, last  November 2017. The AG has said that Huber will be working with the IG who has purview to investigate both criminal wrong doing and violations of the rules by members of the DOJ and FBI.  The IG can’t prosecute anyone, and Huber will be working with him, and it’s pretty clear in Sessions’ letter that Huber cannot prosecute anyone.

So, Sessions has hired one of their own employees to investigate themselves…what a joke.  It’s Rod Rosenstein’s conduct that is in question, a second special counsel is needed, and it’s needed now!

This career US Attorney from outside of DC was selected to alleviate the appearance of being swamp connected, someone from Utah with connections to Mitch McConnell’s boy Sen Mike Lee who strongly endorsed Huber.  Lee has hated Trump from the beginning and still does but has an underserved reputation for integrity. The unknown John Huber was their choice.

Lee is no conservative, one need only check his voting record and where he stands on many issues.  He has promoted virtually unlimited Muslim immigration and lifted caps on several categories of visas.  His stances are anathema to those of President Trump.  Lee supported Ted Cruz and worked diligently to destroy candidate Trump.  He’s another establishment elitist.  His support of Huber is not surprising.

Sessions alleges he intends to more fully build his case first – using the Investigation of Inspector General Horowitz in tandem with that team of outside prosecutors.  Remember that Sessions fired all 46 Obama era prosecutors, and Huber was rehired and then reconfirmed under Trump.

In Breitbart’s recent article, George Washington University Law Professor John Turley called it “brilliant” to combine all the powers of the U.S. Department of Justice’s inspector general with a prosecutor who can bring charges, seek indictments, and get results for President Trump far more quickly than a second special counsel.  Really?  It’s been a year and there are no charges!

Slow walking this investigation has infuriated Trump supporters and Congressional investigators.  And if Huber remains in Utah, he has no power to bring charges or seek indictments. Judge Napolitano suggests that should Huber move to D.C., he may be fulfilling the role of a special counsel.  I’m not buying it Judge! 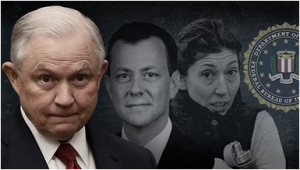 What about James Comey who just said boo and a special counsel is appointed to investigate President Trump and his people for everything and anything under the sun, and Mueller can look into anything.  We have these “in your face” violations of the law and abuses of power by the Obama Justice Department and FBI, and they’re ignored.  Andrew McCabe even lied to investigators and now he’s whining about it.  Send McCabe a box of pacifiers for his “woe is me crap.” Where is there any serious investigation into what really needs investigating?

And what about the newly uncovered text messages between FBI officials Peter Strzok and Lisa Page which suggest a possible coordination between high-ranking officials at the Obama White House, CIA, FBI, Justice Department and former Senate Democratic leadership in the early stages of the investigation into alleged collusion between the Trump campaign and Russia, according to GOP congressional investigators.  Sounds like the DOJ is sweeping this info under the rug.  Link

Sessions is relying on the Inspector General (IG) Michael Horowitz, an internal watchdog, originally appointed by Obama, and an outside prosecutor, Huber, also appointed by Obama, who is not impaneling a grand jury or doing a prosecution. The prosecutor is just looking at the record and may suggest additional resources.  And nothing is going to be done!

There is no public knowledge of any investigation going on by the Justice Department into any of the matters the public cares about.  We don’t need new prosecutors!  We need prosecutions.

Rep. Bob Goodlatte (R-VA) House Judiciary Chairman, notes that the IG cannot investigate in the same manner that Congress and a second special counsel can, and secondly urges the IG to release his report on the FBI and DOJ corruption in handling the Clinton email investigation before starting on a new project.  He adds, “In the meantime we need the documents that we’ve subpoenaed and we need them unredacted.”  Yeah, well they’re slow walking the documents at a snail’s pace.

Where is the RULE OF LAW?

There is more than enough evidence to arrest Hillary Clinton.  The evidence was gathered by the compromised and lying/leaking former FBI Director, James Comey.  There were repeated incidences of the purposeful mishandling of classified information, obstruction and countless lies.  We don’t need special prosecutors, we need someone to prosecute this very obvious case!

There needs to be a more substantive investigation of what was going on with Obama, the Justice Department and FBI in terms of targeting Donald Trump.  But all that AG Sessions has agreed to do is to promise Congress he has investigators led by the Obama appointed U.S. Utah attorney Huber who will decide whether to even investigate!

The unconscionable betrayal by Sessions of Donald Trump with his recusal has cost our President.  Not just Sessions, but Mueller, Rosenstein, Wray and all of them have each other’s backs, and care nothing about the “Rule of Law.”  The rule of law is the principle that law should govern a nation, as opposed to being governed by decisions of individual government officials such as the cronies in the FBI.

Sessions has lost all credibility with putting a Utah leftist in charge.  Freedom Caucus Chairman Mark Meadows said in a tweet: “So the Obama DOJ can open a legally questionable investigation into the Trump campaign—allegedly based on a campaign volunteer mouthing off at a London bar—but this DOJ can’t appoint a second special counsel after all the troubling documents we’ve seen? Disappointing.”

Disappointing isn’t the only word I’d use.

Goodlatte and Gowdy emerged from nowhere as the faces of the probe into Obama DOJ corruption. They played bad cop until Huber was appointed, now “It’s all good.” Really?

Goodlatte was not well known to many Americans as the establishment tool he has always been, so a few key MAGA-friendly statements over the course of a few months may have served to craft a public persona that fit their needs.

Rep. Trey Gowdy is already well known, though his chronic failures to produce results as in the botched Benghazi sham investigation, have caused many to see him as all bark and no bite, the personification of what President Trump complained about as the typical Republicans populating the GOP. And of course, Gowdy thinks Mueller is wonderful and has lauded his choice for special counsel over and over again.

Two Obama holdovers, Horowitz and Huber are investigating corruption within the Obama administration.  Right, and we should expect results?  Lovely isn’t it…Sessions has not taken charge of this department and he’s failing his boss big time.  Conservatives are apoplectic, believing there is more than enough evidence of wrongdoing at the FBI and widespread conflicts of interest within the DOJ to justify an outside prosecutor.

“If he’s not going to appoint a second special counsel then he should step down,” said Rep. Jim Jordan (R-Ohio), a member of the conservative House Freedom Caucus.

Sessions is not viewed as trustworthy by a large portion of the American people, particularly the informed Trump base.  From what it looks like, the AG is trying to have his cake and eat it, too. He wants to give the American people the illusion of an independent investigation without actually going all the way and appointing a special counsel. There are serious allegations hanging in the air about how the Obama DOJ handled the Trump investigation in the early stages, and the American people deserve a serious inquiry.

How I’d love to see Joe diGenova replace Sessions.  Can you hear us President Trump?

P.S.  Every evening, the CEO of News With Views plugs new articles into the website that pop up in our emails early in the morning.  Funding a website of this size is not a cheap endeavor.  NWVs relies on donations from readers.  Please consider donating every month, and tell your friends to go to the website and sign up to receive great conservative articles from many amazing research journalists.