A little black and white sheepdog has a job as sheep herder that she takes seriously. Day by day she guided the sheep to various locations. The sheep seemed to know they were in good paws with that little dog as she led them to various grazing spots and at the end of the day she guided them back home to their barn in Corryong, Victoria, near the South Wales border. The owner of the spread, Stephen Hill, had been at a New Years’ Eve party and got back home at four in the morning, having left hastily after learning of the fire that had broken out.

Seeing that the blazes were quickly approaching his property and the town itself, he grabbed his herd dog and rushed to the barn where hundreds of sheep were gathered.

According to AOL News, the six year old shepherd mix got to work, wrangling the farm’s livestock away from the inferno and into another barn out of the burning area. The heat from the growing fires was fierce. Even so, all but six of the 220 sheep survived, only with Patsy’s help, which is remarkable. Patsy guided them around the flames. What is more, it was still dark when all this was going on. 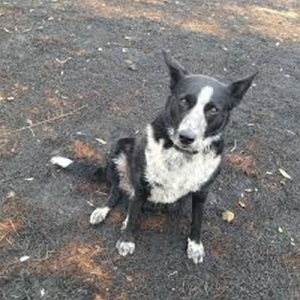 And there seemed to be no place to run to. It seemed that this fire was everywhere. Anyone who has been through such a disaster can tell you what a helpless feeling that situation puts you in. There appears to be no end in sight along with the fear of being burned alive as you feel the searing heat around you.

Stephen Hill’s sister, Cath, called Patsy a “wonder dog” for her heroic efforts. She could have been killed by fire as she led the sheep to safety. That did not concern her. She had a job to do and would do it at all costs. The best thing one can do for a dog is to give it a job. That gives them a real purpose in their lives.

Cath Hill said that the town was quickly resembling a war zone and would continue to burn for weeks. “It’s like Armageddon,” she said to the Metro UK. “Everyone is just trying to get water and feed their animals, shoot the ones that can’t be saved (one can imagine how heart wrenching that would be), get temporary fences up to keep stock secure, and put out all the logs and stumps still burning.

The Australian bushfires have resulted in the deaths of 26 people, destroyed thousands of homes and killed more than a billion animals. There were many scenes in the TV coverage of fire personnel cuddling little Koala bears and other wildlife rescued from the fires, cuddled in their arms with water being sprinkled on them and given them to drink. These fire people showed beautiful compassion to the injured animals. God bless them.

The most disturbing part of the story of all, the Australian fires were deliberately set by Muslims who had threatened to burn up all non Islamic countries right after 9/11. These current fires began at the hands of Muslim punks who were little kids when that took place, but have since grown into the role.

A plane filled with American firefighters who flew over to help fight the fires were met by mobs of people in the airport applauding loudly as the firefighters got off the plane. They were welcomed as the heroes they are.

To see the first story on this, naming the Muslim punks who started this fire, with a photo of one of them, click link.