Home/January 2020, Opinions/Slow Moving Socialist Avalanche Is Headed Right For You

Slow Moving Socialist Avalanche Is Headed Right For You

Now Just How Are You ‘Gonna’ Change Things?

“Historical change is like an avalanche.  The starting point is a snow-covered mountainside that looks solid.  All changes take place under the surface and are rather invisible.  The one certainty for anyone in the path of an avalanche is this: standing still is not an option.”  —Norman Davies, British historian

You are skiing in the back country when all of a sudden you hear an ominous cracking and then a rushing sound like a hurricane.  You look up slope to the mountain above you and realize that half a mountain of snow is headed right at you at 80 to 100 miles per hour.   In an instant of horror and panic, your life flashes in front of you.  You have two choices, stand still and die, or run.  But which way should you go?  Do you move sideways to get out of the path, or do you ski down hill in the hopes of out running the avalanche.  The statistics say that you have probably bought the farm.  Only a snowmobile has any chance of moving fast enough to escape being overrun.  However, if you are caught up in the avalanche, the best advice is to swim in it and make air pockets as the avalanche comes to a stop.  You should also be wearing an avalanche beacon so rescuers can find you.

Snow avalanches are sudden events and can occur without warning.  But the slow-moving avalanche into socialism can take several generations and is so imperceptible the average person never sees it coming.  You had better look up because there is a slow-moving, socialist avalanche coming right at you and that avalanche contains inside it, tyranny, oppression, despotism, domination, confiscation and government control and abuse.  That avalanche contains the chains that will encase you forever in the cement of slavery. 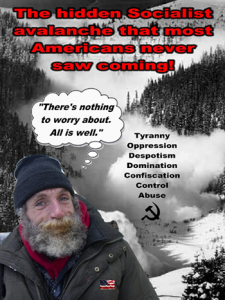 The current Democrat candidates for President are a picture window into what they have in mind for you, lots of “free stuff” with no way to pay for it, if they get elected.  The “free stuff” is designed to buy the votes of stupid people that haven’t learned there is no such thing as a free lunch.  Sadly, America is loaded with very stupid people and they might just have the numbers to elect the likes of Bernie Sanders, Elizabeth Warren, Joe Biden, Pete Buttigieg, Amy Klobuchar, Tom Steyer, or God forbid, Michael Bloomberg.  These Democrat candidates all want to tax the middle class into oblivion for their socialist programs and they want more control over your lives.  They are not your friends.  They are your sworn enemies.

Let’s just say that you aren’t stupid and you can see clearly what is going on.  Just How Are You ‘Gonna’ Change Things?

There was a more simple time when Americans looked to them selves to get out of a scrape, instead of holding their outstretched hands to a nanny government for rescue and salvation.

But where is it written that the people have the power to peacefully turn back the clock to freer times, when our government has become so powerful and resistance is very costly, possibly futile, or deadly?

How can we unravel the tangled web of razor wire that is our legal and unjust justice system? How do we convince lawmakers that what they are doing is sapping the very strength and vitality out of our people by being everything for them and regulating every aspect of their lives?

How do we round up and send 22 million illegal aliens (current estimates) back across the border that they have purposely violated because government and special interest groups created multiple magnets for them to come here in the first place?  How do we stop the hemorrhaging of billions of our tax dollars to an ever-rising criminal, financial and national security crisis that is illegal immigration?

What are YOU going to do about illegal immigration?  Most likely you will do nothing because the problem exceeds your individual ability to fix it.  The only people that can fix it (Congress), are AWOL, absent without leave and engaging in petty, infantile, elementary school sandbox squabbles over power.  That is what the impeachment of Donald Trump is all about ….. raw political power engaged outside of the ballot box.

Tell us how you are going to repeal the millions of environmental laws that have made property rights meaningless and have raised the price of everything by significant margins?  Who is going to stop the onslaught of endless climate change propaganda that has infected all of our institutions and the body politic before we spend trillions to fix a non-existent problem?

Now that government has taken over our health care, what is to stop them from taking control of our money, our land, our water, our food, our cars, our gas, our roads and our electricity?  Absolutely nothing!  They already have!

How do you convince a person that the handouts they are receiving from government are coming from someone else’s sweat, labor and earnings and that what they are accepting is morally wrong, even though several generations in their extended family have been receiving those handouts. There are people in our society that need our help, but should that help come from government? Should it not be the outpouring of true compassion through those entities that are best able to administer it, in the private sector? Unfortunately there are way too many people in America that are getting government help that have no moral or constitutional right to it. The cost to our treasury and to the recipient’s independence and pride is astronomical.

Finally, how do you undo the power that our government has amassed by violating the constitutional limits on its powers for over a hundred years, while WE THE PEOPLE looked the other way?

All the talk, all the rhetoric and all the talk shows and conservative articles in the world will not turn back the clock to the principles upon which America was founded.  Either the believers and fighters in the defense of freedom and liberty coalesce as one on a grand scale, or the hands of the American clock will click ever onward towards abject socialism, radical environmentalism and the one world order.  The Pendulum of our clock swings ever wider towards enslavement, as freedom smiles from a distance and then fades into a dim memory of all things past.

Traitors from within (Progressives) have bewitched us.  These traitors haunt the halls of our government and taunt the devil in all of us.  They have poisoned three generations of our children and their parents.  They bring servitude instead of freedom; they promise security instead of liberty; and they force dependence on government instead of promoting self-reliance.  We must be forever on our guard to prevent the traitor from convincing us that we are but victims and are in constant need of our father-mother government, to watch out over us. Even 2,000 years ago, wise men knew the evils of the traitor within and the devil that stalks freedom in the night and in the back rooms where ambitious men lay the seeds of slavery for all.

Those in power continue to divide and lie to us.  Corruption in government is rampant.  Today, the Establishment and Deep State divide us on race, religion, gender, jobs, foreign and economic policy, health care, Medicare, Medicaid, Social Security, education and immigration.  We are so fragmented from this division we run around like chickens with their heads cut off.  We fight each other instead of government.  We couldn’t mount a unified and large enough fighting group if our life depended on it.  But our freedom and our very lives do depend on it.  Sure we engage in skirmishes all over the place, but government just puts them down, or hauls away the leaders, or ignores us altogether.  Remember Waco and Ruby Ridge.

It is a fact that only a well-equipped, well-trained, well-led, well funded and unified army can defeat a powerful enemy, foreign or domestic.  So far, that unified army in the defense of freedom has not materialized.

But America is on the precipice of a new world war. If that happens there will be no turning back the clock, as America takes on world powers, whether it be Putin’s Russia, China, a nuclear Iran or North Korea, ISIS, Boko Haram, Al Queda, or an Islamic Caliphate, or all of them at the same time.  We must act before that happens.

The clock is ticking as liberty seeks men and women that are willing to lay it all on the line to limit the power of government, so that freedom may enter and remain in the hearts and minds of all people forever and government fears the people, instead of the other way around.

This slow-moving socialist avalanche is headed right for you. It will soon surround and envelope you, if it hasn’t already. You cannot escape it. You can only succumb to it or fight it and hopefully, eradicate it before it consumes you, “eats out your substance” and turns your brain to mush.  That is the only way you’re ‘gonna’ change it.

What happened to these proud “people” and proud “families?” Do they still exist, or has a slow-moving socialist avalanche swallowed them up and turned their minds and bodies to compliant robots?

We titled this article with “Just How Are You ‘Gonna’ Change Things?”  The first thing you can do is to make sure that President Trump is re-elected in 2020.  The second thing you can do is to get involved, somewhere, somehow because we are in a slow-moving, socialist avalanche and STANDING STILL IS NOT AN OPTION.  IT IS SUICIDE!

Our efforts in this regard consist of showing LANDOWNERS how to hold government at bay with several tools and documents. We offer an in depth, comprehensive chronological history of constitutional freedom in our Empowerment Package that your children aren’t learning in school.  We offer our nationally known 14-year old WEBSITE that is full of the sounds of freedom and chalk full of information you won’t find anywhere else, whether rural or urban.  We’re not standing still.  Are you?