”No one should suffer from the great delusion that any form of communism or socialism, which promotes the dictatorship of the few instead of the initiative of the millions, can produce a happier or more prosperous society.”  —Charles E. Wilson, Secretary of Defense Under President Eisenhower.

The recent “Yellow-Vest” riots in Paris, France and the on-going riots taking place in Caracas, Venezuela, are no accidents and have the same four causes; government over-regulation, institutionalized socialism, the lust for political power and accompanying promises to buy votes to obtain that power.  It is also no accident that government purposely divides up the masses so that they take their anger out on each other while taking their eyes off of government.  In Venezuela, the people’s eyes are now firmly fixed on the government and violence is their response to what government is doing to, or against them.

There is no question that large populations require significant regulations to control.  But there is a fine line between reasonably controlling the masses and preserving individual liberty.  Government always errs on the side of over regulation and oppression and continues to do so until the masses rise up in outbreaks of civil disobedience.  Civil disobedience then increases in severity until it reaches the violent stage and eventually open warfare, or revolution.  It’s not if a war will happen, only when.

Government will also use a “manufactured crisis” coupled with guilt to control the masses.  One of government’s favorite “manufactured crisis” today, is climate change.  They convince the masses that they are responsible for the crisis (guilt) and then talk’s them into, with massive propaganda, paying for what they are causing and pay through the nose.  If the cost to the masses is too high, violence is triggered, as in the Paris riots. 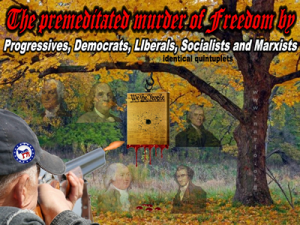 It is the Progressives, the liberals, the Democrats, the socialists and the Marxists (identical “Quintuplets”) that err on the side of over-regulation, control, manipulation, cajoling, herding and taxing those over which they have political power.  These “Quintuplets” buy off large segments of the masses with promises from the public treasury and then turn them against those that must, by force of law, fill the public treasury.  To rile up the bought-off masses, they vilify and demean those forced to pay, creating an irrational, irreconcilable divide between rich and poor.  Sadly, the masses are too stupid to know they are being duped, being blinded by the beneficiaries of government largess.

But that is not all these corrupt “Quintuplets” have done.  Since before the turn of the Twentieth Century, they have systematically torn down the foundation of liberty that was established, at great cost, by the Founding Fathers.  They have, in essence, planned a premeditated murder of American freedom, all for the sake of political power, a murder for which they should pay the price of traitors.

Besides buying off the masses for votes to secure perpetual political power, they have eaten away, dissolved, distorted, misinterpreted, repealed, or abolished almost all of the Bill of Rights.  They then replaced the Bill of Rights they just destroyed, with un-constitutional rights, by telling the masses they are entitled to “free stuff” (for votes) that are unabashed, shameless, open and blatant violations of the Constitution.  The list of their socialist attacks on freedom would cover volumes but we will only list the more egregious ones in this column.

The “Quintuplets” have, with malice, ripped up the ……

The “Quintuplets” have turned the original purpose of government on its head.  The American Government was instituted among men to preserve, protect and defend the individual rights of its citizens, under the Constitution.  But if government abolishes those rights, which for the most part it has as we have described above, it then turns to preserving, protecting and defending government’s existence ….. by any means, which the “Quintuplets” have been doing for over 100 years.  Eventually, that “protection of its existence“, turns to a police state, as in Venezuela.  Finally, a free people will turn to violence as they seek redress from government oppression.  The cycle repeats itself in multiple countries, century after century.

Consequently, it can only be deduced that civil war or revolution is our one and only future.  If there are viable alternatives to war, they have not presented themselves.  The gap between the two sides is so wide as to prevent any peaceful compromise.  The gap grows incessantly wider by the day, egged on by government, politicians and special interests.

As our titles states, “Socialism caused the Paris and Caracas riots.”  These same types of riots are coming to a city near you for the same reasons and you won’t be able to stop them.  As we unravel as a society, we become vulnerable to a foreign power that could very easily take advantage of our weakness and division, if they haven’t already.

That ultimate reality is, your “one remaining defense“ against the “Quintuplets” is your property line.  There is still viable law that allows you that defense.  Government has removed most other defenses.  You can find that “one remaining defense” HERE, whether you live in a big city, or out in the wide-open spaces of America.

We encourage the reader to study the image that accompanies this article.  Look for the images of the Founding Fathers as they fade into the background and nothingness.  Look for the bullet holes in the Constitution.  What the image reveals is true and very unsettling.

The Constitution now lays in ICU, bleeding internally and on life support.  Its breath is shallow and its heartbeat faint.  It is doubtful that there is a cure for the intractable socialist disease that racks its body.  The clinical name for this disease is, “socialistinuterusocasiomeningitis.” The disease appears more in women and young adults but for unexplainable reasons it seems to have little effect on those over 65.

There is an antidote for the disease, but the antidote is in short supply and comes with an astronomical cost.  It remains to be seen if freedom-loving Americans are willing to pay that cost.  They did once before, but do they have the courage to do it again?  The task is much tougher now because they have failed to use the antidote when it would have been more effective and the damage wasn’t so great.

Next week we will cover the forgotten and ignored inhabitants of ….. “Fly Over Country.”