I think that the most important element of President Trump’s 2019 State of the Union Address was his firm, unequivocal commitment:

“America was founded on liberty and independence, not government coercion, domination, and control. We are born free, and we will stay free.” Adding, “Tonight, we renew our resolve that America will never be a socialist country.”

There were many other important items in his speech, but that categorical statement, which he properly emphasized, will mark the tone of his tenure as a U.S. President. 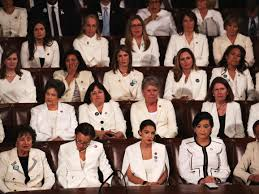 There was, however, something in the event that, as a Cuban-born American who risked everything to escape from a bloody totalitarian dictatorship, was highly offensive to me: the presence of a group of women politicians dressed. The reason I am offended is because it is precisely in Cuba where a small group of women, commonly called the “ladies in white,” have for many years peacefully marched in protest against the arbitrary imprisonment of their husbands, the killings of their sons and the lack of freedom in that slave Island. Moreover, contrary to their American counterparts, the Cuban ladies in white hate socialism.

Cubans who have been suffering for long decades the system our women politicians in white love so much don’t call it “socialism.” One of the few things Cubans have not lost is their sense of humor. So, instead of “socialism,” they call the Cuban system “sociolism,” with an “o”, as a pun for “socio,” Spanish for “crony.” They do it because the system the Castros and their Rockefeller friends imposed upon the Cuban people is actually crony socialism. History has shown that, if crony capitalism is bad, crony socialism is much worse.

Progressive leftists are now accusing people of what they call “cultural appropriation.” Well, dressing in white is a despicable form of cultural and political appropriation of which they should be ashamed. If our pro-socialism women politicians still have an ounce of decency left they should publicly apologize for their offensive, insensitive behavior to the Cuban ladies in white. Shame on them!

Adding insult to injury, this bunch of idiotic, selfish women politicians seem convinced that changing America into a communo-fascist dictatorship is the best thing that may happen to the American Republic. The fact that they call it “socialism,” only shows their supreme ignorance, because the Nazis called themselves “national socialists.” Moreover, as the Nazis firmly believed that the Earth was hollow, our women politicians in white firmly believe in this idiocy they call “global warming.” Most likely none of them visited Chicago three weeks ago.

I don’t know where this group of ignorant, idiotic women politicians came from. Were they assembled in a super-secret robot factory in China? Probably not. I guess they are the product of our so-called “public schools.” Only people miseducated in American public schools and universities still ignore the fact that socialism has proven to be one of the most disastrous social failures of all times. But don’t blame them. Blame yourself, because you are the one who has footed the bill for their communist indoctrination.

But not everybody sends their children to the idiot’s factories. Most of the progressive leftist millionaires in Silicon Valley send their children to very expensive private schools where computers are not allowed. The reason for this is because they don’t want their children to be indoctrinated but to become the future brainwashers. As Orwell wrote in his novel Animal Farm, all animals are equal, but some animals are more equal than others.

Currently, even the benign socialism practiced in countries such as Sweden, Denmark, the Netherlands and Holland is in deep crisis thanks to their immense love for illegal immigrants whose main hobbies are robbing, raping and killing the locals just for the fun of it. Some years ago, even the Union of Soviet Socialist Republics collapsed under the weight of its own failures. China still survives because they have changed their socialism into a sort of crony capitalism. Venezuela and Nicaragua, key examples of Latin American socialism, are in chaos. France and even the UK, where many socialist measures have been implemented, are facing strong opposition from their own people. In contrast, it seems that this group of women politicians in white hate America so much they would love turning it into a socialist cesspool.

But the Rockefellers still make most of their money from oil. This explains why they give so much money to the people and organizations who are against efficient sources of power such as coal, natural gas and nuclear, and wholeheartedly support the use of inefficient forms of energy such as wind and solar which cannot compete with their beloved oil.

After the fall of the Soviet Union, when Castro could not milk the Soviet cow anymore, he adopted a mantra with which he ended his speeches. After telling the Cuban people that now they have to tighten their belts even more, he stubbornly told that Cuba will continue to be a socialist country, and yelled: “Socialism or death.”

Well, his failed experiment in Cuba has shown everybody in the world, with the sole exception of our women politicians in white, that the only casualty in this ideological war has been socialism itself.

Socialism has died from natural causes. Don’t let anybody raise it from the dead.

Let’ drive a stake through its heart!