The organizer dedicated to changing the life of a particular community must first rub raw the resentments of the people of the community. —Saul Alinsky

The tendency of liberals is to create bodies of men and women-of all classes-detached from tradition, alienated from religion, and susceptible to mass suggestion-mob rule. And a mob will be no less a mob if it is well fed, well clothed, well housed, and well disciplined. —T. S. Eliot

The Party of Hate

The choreographed and monetarily funded histrionics at the Judge Kavanaugh hearings are finally over. 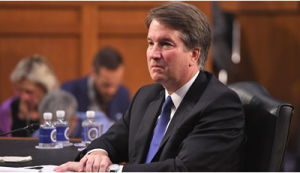 Unfortunately, these hearings were more about confrontation than confirmation. Socialist democrats have learned their Saul Alinsky lessons well as they use both tyranny and mob rule to disrupt what should be respectful hearings for the President’s nominee to the Supreme Court. It was Hillary Clinton’s close friend, Saul Alinsky who wrote Rules for Radicals and made a literary allusion to Lucifer as “the first radical known to man” in an epigraph to his book.

In Melanie Phillips article, America’s Party of Hate and Subversion, she writes:

On the first day of the hearing, left-wing activists screamed, chanted and cheered more than 60 interruptions as the Democrats tried to get the hearing suspended altogether. More than 70 people were arrested. The atmosphere became so offensive that the judge’s wife was forced to escort her visibly upset young daughters from the hearing.

This wasn’t just hooliganism; it also showed signs of mental derangement, as  reported by the Washington Times. 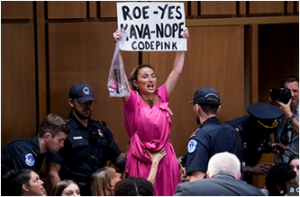 Three men from Texas saw protestors being paid.  The protest organizers apparently paid their fines for protesting, but therein lies the question…who funds the organizations. Link

One of the protesters is the leader of Antifa DC, Lacy MacAuley, who intended to disrupt the inauguration of President Trump.  She led the Handmaid’s Tale protests at the Kavanaugh hearing.  They are Antifa in disguise.

The left’s extreme bias against Republican nominees to the Supreme Court started with President Reagan’s nominee of Judge Robert Bork in July of 1987. 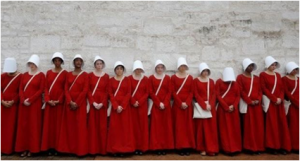 Bork, a ruddy-faced, bearded and burly former Marine, made his first mark in academia as a specialist in antitrust. By the 1960s he was a strong legal conservatism, which he dubbed “original intent” — meaning that judges should go no further in interpreting the Constitution than the words of the founding document.

By the time President Reagan nominated him to the U.S. Supreme Court in 1987, Bork had spent five years as a federal appeals court judge and had in both his judicial and academic roles amassed a long paper trail of legal writings.

Senator Ted Kennedy started the rhetoric against the judge.  He said, “Women would be forced into 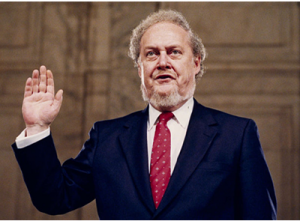 back-alley abortions, blacks would sit at segregated lunch counters, rogue police could break down citizens’ doors in midnight raids, schoolchildren could not be taught about evolution, writers and artists would be censored at the whim of government, and the doors of the federal courts would be shut on the fingers of millions of citizens for whom the judiciary is often the only protector of the individual rights that are the heart of our democracy.”  Bork said every word was a lie.

Then Senator Joe Biden put the nail in Bork’s nominee coffin when he sent Bork’s nomination to the floor with a recommendation that he be rejected.

Bork commented, “Federal judges are not appointed to decide cases according to the latest opinion polls,” adding that if judicial candidates “are treated as political candidates the effect will be to erode public confidence and endanger the independence of the judiciary.”  The judge was right, this is what we have today. 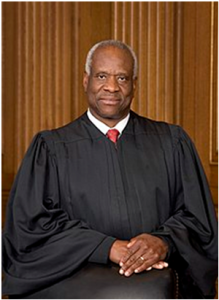 His defeat taught interest groups to demonize judicial nominees based solely on their worldview.  Anthony Kennedy was nominated and confirmed in Bork’s place. Kavanaugh will most likely replace Justice Kennedy.

On July 1, 1991, Judge Clarence Thomas was nominated by Bush to fill Thurgood Marshall’s seat on the United States Supreme Court. Thomas’s confirmation hearings were bitter and intensely fought, centering on an accusation that he had sexually harassed attorney Anita Hill, a subordinate at the Department of Education and subsequently at the Equal Employment Opportunity Commission (EEOC). The Senate ultimately confirmed Thomas by a vote of 52–48.  Thomas was also a judge who believed in original intent of the Constitution.

The Kavanaugh histrionics certainly cannot help the Democratic quest for the House or Senate.  The Republican risk is that their 2016 people will either vote Democrat or stay at home.  The churlish disrespect of Senate Democrats means they deserve defeat, but democrats have traditionally exercised better party discipline cohesion in their cause than Republicans. Of course, most Republican are establishment and are part of the leftist globalist cabal.  Now that we have Trump Derangement Syndrome, we have seen the extent to which the resistance to Trump is driving Democrats, and many Republicans.  This only serves to damage our country.

Cory Booker is the junior Senator from New Jersey.  He plans to run for President in 2020.  Kamala Harris is the junior Senator from California and she too has plans of running for President.  Both are socialists bordering on full-fledged communists.  They have no common decency, respect, or tolerance for Christian beliefs, despite advocating for tolerance, but tolerance of only aberrant societal behavior.  There is no tolerance for Christian conservatives or their beliefs.

Sen. Booker says he released confidential documents in what he admitted was a violation of Senate rules.  The Democratic Senator referred to an email Judge Kavanaugh sent while in George W. Bush’s White House counsel office which discussed the legal merits of racial profiling after the terrorist attacks of 9/11.

The Senator was praising himself for high moral character as a Spartacus for releasing the documents which had already been made public.  He knew that; this was all a charade for the dumbed down leftists watching this visceral display of arrogance and duplicity.  This socialist has no trouble screaming at Secretary of Homeland Security, Kirstjen Nielsen.  No respect, no decency, no civility.

I agree with Judge Kavanaugh.  We needed profiling after 9/11, and we still need it today.  Who are those who have been responsible for 99% of the terrorist activities?  I don’t even need to answer, we all know, and yes, they should be profiled to protect Americans from further attacks.  When the TSA profiles, they never look at likely perpetrators, they look at American citizens including nuns and paraplegic children.  We’ve all seen it.  Profiling needs to exist for our safety.

Cory Booker thinks profiling is unconscionable. We have every kind of gang filth pouring over our southern border, this includes the worst of them, MS-13, along with Islamic terrorists.  My former county sheriff knew the different tattoos of each of the dangerous gangs.  He taught his entire department what to watch for and which of these gangs were most dangerous and how to know them by those tats.  Why did he racially profile these gangs?  To protect his law enforcement officers so they have the knowledge of who and what to watch for so they stay alive to go home to their families.

Senator Ben Sasse made it very clear as to what these vitriolic hearings entailed, including the fact that Judge Kavanaugh’s children had to be removed from the room because of the filth pouring from the Democratic party mouthpieces.  I would urge everyone to watch this 15-minute video of Senator Sasse’s comments to Judge Kavanaugh.

Personally, I am ashamed of what these Democratic representatives have become, what they are teaching children, their nasty demeanor and their lack of common decency, civility and manners, especially in front of Judge Kavanaugh’s children.

President Trump has derailed the New World Order’s plans for global domination and for the destruction of this great country, the United States of America.  The playing field was to be leveled, we were scheduled to be a third world country. For that reason alone, President Trump is despised, reviled, and maligned. The desire for his destruction is the number one cause of the left, as well as a majority of the neo-con right.  Trump derangement syndrome is on both sides of the aisle.  Subverting the President’s goals via the likes of Republicans Ryan, McConnell, Murkowski, Collins, Flake, McCain and others is common place.

It is up to the American electorate to be as vigilant and strong in electing Republicans to our Congress in 2018 as they were in electing Mr. Trump as our President.  Our lives and future actually depend upon it.