I first became aware of the State of the First Amendment (SOFA) survey in early 2014. Since then, I’ve reviewed the results every year until 2019, which is the last report on the website. The 2019 survey was conducted for the Freedom Forum Institution by Fors Marsh Group. According to the report, the survey sample was designed to provide nationally representative estimates for adults 18 years of age and older. We’ll start with the participants’ familiarity with the First Amendment.

Familiarity with the First Amendment 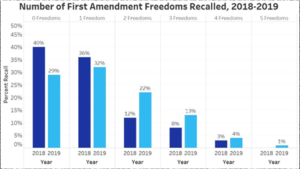 Appendix A, State of the First Amendment Survey

The first question participants were asked is the same one that got me started with the Constitution Study: How many rights guaranteed by the First Amendment could they name? While the 2019 responses were better than 2018, they are still not encouraging.

2019 State of the First Amendment Survey

Twenty-Nine percent of those surveyed could not name a single freedom protected by the First Amendment. This is the lowest number since I’ve been following the report, but you may notice that in 2018 that number was 40%, the highest I’ve seen. While a large percentage of respondents correctly named Freedom of Speech, a growing number of incorrect answers were also given.

2019 State of the First Amendment Survey 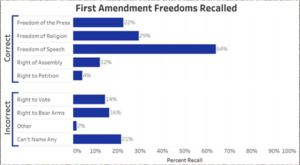 The 2019 SOFA survey also found statistically significant demographic differences among those who could recall certain freedoms. Education was the most common predictor of recalling a First Amendment right – participants with more education were more likely to recall freedom of speech, religion and assembly.

Another interesting question asked on the survey was if the respondents believed that First Amendment protections go too far? In 2019 the number who agreed with that sentiment was 29%, up from 23% the previous two years.

If a third of respondents can’t name a single freedom protected by the First Amendment, and 29% of them think those protections go too far, what does that mean for those freedoms?

There has been quite a controversy lately regarding cancel culture. What are the responsibilities of social media companies regarding the content posted by their users? Are there any legal liabilities for what their users post? The 2019 SOFA survey asked respondents if they agreed with the statement, “Social media companies violate users’ First Amendment rights when they ban users based on the content of their posts.” Even though they had just had the First Amendment read to them, a significant majority agreed with the statement.

According to the survey, it appears the majority of Americans not only don’t know what the First Amendment says, but they don’t understand how to apply it. Even 71% of those who could name three or more of the rights protected appear to believe that the words “Congress shall make no law…” means social media companies shall make no rules. 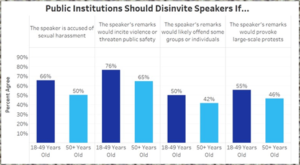 Social media companies are not the only entities for whom the Freedom of Speech seemed to be misapplied. Respondents were also asked if they agreed with the statement, “public institutions should revoke invitations to guest speakers” in different scenarios.

A majority of respondents think a speaker should be disinvited on the mere accusation of sexual harassment, the possibility of protests, or even if someone might be offended. This is commonly referred to as “The Heckler’s Veto.” All it takes for someone’s right to Free Speech to be infringed is for someone to claim they are offended or that it may cause others to act badly. As for the accusation of sexual harassment, notice it was based on the accusation, not the conviction. Anyone can accuse you of anything, but in America you used to be considered innocent until proven guilty. Notice, that in each of these situations, those 18-49 are more likely to infringe on the rights of the speaker than those 50 and older. Now compare this with the statement, “Public school students should be allowed to report on controversial issues in their student newspapers without the approval of school authorities.” 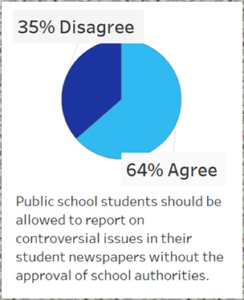 Do you see the hypocrisy? Compare how many people think the students should be allowed to express their opinions with the number who wish to deny speakers their right to do the same.

Freedom of the Press

What about Freedom of the Press. How important do the respondents think that is?

Seventy two percent agreed that, “it is important for our democracy that the news media act as a watchdog on government,” and 48% agreed with the statement that the news media, “tries to report the news accurately and without bias.” Not surprisingly, the reactions to the latter statement differ wildly between the two largest political parties, with 39% of Republicans agreeing compared with 56% of Democrats. This trend continued when respondents were asked if they agreed with the statement, “The spread of fake news and misinformation on the internet is a serious 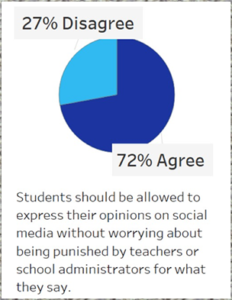 threat to our democracy.” While 77% agreed that fake news was a threat, the split was 84% for Republicans and 77% for Democrats.

The last question asked on the SOFA survey involved Freedom of Religion. Respondents were asked if freedom of religion applied to all groups, “even those that most people would consider extreme or fringe.” Overall, 82% agreed. Even when broken down by the religion of the respondent, the differences were only a few percentage points. Only 5% of respondents strongly disagreed with the statement. 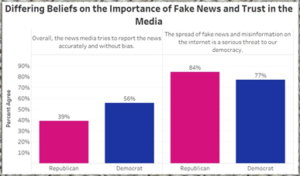 express themselves, both in school newspapers and on social media, without reprisals from the schools. Compare that with the sentiments that the First Amendment goes too far and that those with potential controversial opinions should be disinvited from speaking at public institutions. The opinions that social media companies are subject to First Amendment restrictions, even after having it read to them, shows the general lack of understanding. Are things better in 2021 than they were in 2019? I’ve certainly not seen any evidence to that effect.

The good news behind this report is that it shows that many of the issues in our country are based on a lack of understanding of the supreme law of the land. That may not sound like good news, but remember, as Thomas Jefferson said:

I know no safe depository of the ultimate powers of the society, but the people themselves: and if we think them not enlightened enough to exercise their controul with a wholsome discretion, the remedy is, not to take it from them, but to inform their discretion by education. this is the true corrective of abuses of constitutional power.

That is why I started The Constitution Study, so that We the People realize we can educate ourselves and that we must work to educate others if we wish to live free.

Maybe you found this report depressing. Hopefully, rather than wallowing in what is wrong, together we can work to make it right.

About the Author: Paul Engel