Home/June 2022, Opinions/Stay the Course, for the Goal Is in Sight!

Stay the Course, for the Goal Is in Sight!

Whenever the Olympic games take place, I especially enjoy the opening and closing ceremonies. It is wonderful seeing athletes from all over the world wearing the distinctive garb of their countries and carrying their national flags.

During the opening ceremonies, it is customary for the athletes of the many participating nations to march into the stadium under their own nations’ flags. This is in preparation for the national teams to compete against each other to gain glory for their respective countries. In contrast, during the closing ceremonies flag bearers of the nations proceed into the stadium together followed by the athletes from the countries those flags represent. The athletes come into the stadium as one body singing, dancing, and celebrating their common bond that they participated in the Olympic games, no matter to what nation they belonged. 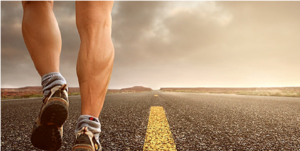 It is like Van Halen’s rendition of the song Dancing in the Street (originally sung by Martha & the Vandellas), where people from all over the world get out into the streets and swing and sway to sweet music, expressing their joy of life and celebrating it with each other.

Armin Van Buuren, the famous Dutch DJ, is known worldwide for his very energetic progressive trance and dance-pop music concerts. It is obvious the joy he feels as he brings joy to his hearers. Armin dances as he controls the synthesizer and other equipment rolling out the show. The lights and music amaze and excite the crowd as they dance together waving flags from nations around the world.

In a small way this reminds me of the joy that will be when Jesus returns and takes from every nation and all tribes and peoples and tongues a great multitude which no one will be able to count home to heaven (Revelation 7:9-17), where with great joy they will sing, dance, and celebrate as they make their way down the streets of gold praising and thanking God. Praising Him as the Creator and Sustainer of all things and thanking Him for sending Jesus, His one and only Son, who redeemed them from their sins, the devil, and his minionswho had tormented them on earth.

In the 2006 epic historical action film 300, Leonidas, King of Sparta, led 300 Spartan warriors during the Battle of Thermopylae (480 BC) in a seemingly hopeless fight to defend his home against the army of King Xerxes of Persia more than 1,000 times the size.

In a pivotal scene, Leonidas met personally with Xerxes, who offered him great wealth and power if only he would kneel and worship him.Leonidas refused Xerxes’ offer, choosing instead to meet death with his fellow warriors defending their home. He further told him that contrary to being forgotten, history would remember that free men stood against a tyrant, that few stood against many, and that in the end all would know that Xerxes was no god at all.

Ephialtes, a Spartan who was turned away from joining Leonidas in the fight against the Persian invaders due to a physical deformity that prevented him from holding up his shield high enough, became embittered and made a different choice. He defected to Xerxes, who offered him wealth, luxury, women, and a military uniform if only he would kneel and worship him and tell him of the hidden pathway where he could trap and destroy Leonidas and his men. Ephialtes, awed by and desirous to partake of the splendor around him, prostrated himself before Xerxes and worshiped him, thus betraying his countrymen.

The first scene in 300 is reminiscent of another temptation that took place long ago that has made an indelible mark in history.

“The devil took Him [Jesus] to a very high mountain and showed Him all the kingdoms of the world and their glory; and he said to Him, ‘All these things I will give You, if You fall down and worship me.’ Then Jesus said to him, ‘Go, Satan! For it is written, ‘YOU SHALL WORSHIP THE LORD YOUR GOD, AND SERVE HIM ONLY.'” (Matthew 4:8-10)

Because Jesus refused the devil’s offer to gain rulership of the world by avoiding suffering and death on the cross, all who trust in Him have complete forgiveness of their sins and an eternal place in His universal kingdom with all its unfading glory.

In contrast, global elitists such as some of those affiliated with organizations like the World Economic Forum (WEF) and the Bilderberg Group may have responded to the offer of wealth and power in a similar fashion as Ephialtes by bending the knee to the “god” of this world (2 Corinthians 4:3-4). In doing so, they serve a defeated lord for a kingdom that will not last but will be destroyed and replaced by the eternal kingdom of the Resurrected One, the King of kings and Lord of lords, Jesus Christ.

God’s people throughout history up to current times, have faced tests to their faith and temptations to compromise their fidelity to Jesus. Like Xerxes in 300, the devil will come to us and dangle something in front of our eyes we desire, or feel is indispensable to life in this world. It could be wealth, power, position, something, or someone. He will whisper in your ear,

“Do you want this? All you must do is kneel to me and this will be yours.”

Do not listen to him! Satan is a liar, thief, and murderer. You cannot bargain with someone who seeks your destruction no matter what. Instead, trust in the One who gives freely abundant life, eternal life. Jesus says,

“I am the door; if anyone enters through Me, he will be saved, and will go in and out and find pasture. The thief comes only to steal and kill and destroy; I came that they may have life, and have it abundantly. I am the good shepherd; the good shepherd lays down His life for the sheep.” (John 10:9-11)

Subtle or clear, whatever tests come or their level of difficulty, God’s grace is sufficient to carry us successfully through them just as it was for His faithful believers gone home to heaven before us. This is an encouragement for all who trust in Jesus alone for forgiveness of their sins and salvation to press on with the race to the not-so-distant finish line.

“Blessed be the God and Father of our Lord Jesus Christ, who according to His great mercy has caused us to be born again to a living hope through the resurrection of Jesus Christ from the dead, to obtain an inheritance which is imperishable and undefiled and will not fade away, reserved in heaven for you, who are protected by the power of God through faith for a salvation ready to be revealed in the last time.” (1 Peter 1:3-5) 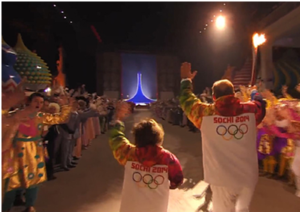 Former award-winning figure skater Irina Rodnina took the torch and was met by former champion ice hockey goalkeeper Vladislav Tretiak, handing the torch to him. On both sides of the long path leading out of the stadium to the cauldron were all those who previously participated in the program. It was moving to watch them cheer on Tretiak and Rodnina as they jogged out of the stadium to the culmination of the program, the lighting of the cauldron.

This reminded me of the great cloud of witnesses described in Hebrews 11-12:1-3, whose stories encourage us to remain faithful to God and stay in the race until the finish line is crossed.

“Therefore, since we have so great a cloud of witnesses surrounding us, let us also lay aside every encumbrance and the sin which so easily entangles us, and let us run with endurance the race that is set before us, fixing our eyes on Jesus, the author and perfecter of faith, who for the joy set before Him endured the cross, despising the shame, and has sat down at the right hand of the throne of God.” (Hebrews 12:1-2)

Do not give way to even intense pressure or throw in the towel. Bend not the knee to Baal or Molech, or receive thirty pieces of silver, or drop the pinch of incense to Caesar. Do not cast aside the approval of God for the approval of men (John 12:42-43). Bow not to the powers and principalities in this world that animate the elitists seeking global domination over all life (Ephesians 6:11-13). Persevere, standing firm with hope in the Lord. It really is worth it!

“For whatever was written in earlier times was written for our instruction, so that through perseverance and the encouragement of the Scriptures we might have hope. Now may the God who gives perseverance and encouragement grant you to be of the same mind with one another according to Christ Jesus, so that with one accord you may with one voice glorify the God and Father of our Lord Jesus Christ.” (Romans 15:4-6)