Home/October 2017, Opinions/Steve Bannon And The Takedown Of The GOP Establishment

Steve Bannon And The Takedown Of The GOP Establishment

We are living in an unprecedented time in American political history. The term, “sea change” is not enough to describe what we are witnessing. A “non-violent political revolution of the middle class against the ruling order” may be a better phrase.

Whatever you call it, it is true realignment leading to an electoral shift of voting patterns within the conservative movement. There is also, because of Trump, a change within the socialist movement, especially with the Democratic Party going further to extremes in its political positions. The combination of extremism and weaponized rhetoric from the deep state-controlled media has driven Democratic Party followers to unforeseen violent responses.

On the other side, there has been a tremendous awakening that has led to a maturing of the conservative movement in the past few years – once a sizeable conservative voting bloc finally realized that the Republican establishment had compromised them and their country.

Over the last decade, the conservative resistance movement and Trump together have uncovered and outed the Republican Party. Its former loyal voters during the previous five decades have now have been awakened – like the abused wife who has left her unfaithful husband – and is looking for a new life and a new man who will love her and protect her interests.

It is a story of the faithful woman who ran out of love for her cheating man. The Republican Party has been exposed by Trump for cheating on America and the middle class. The unfaithful Republican establishment is consistently facing a steady diet of vitriol and hatred from their once loyal base. The breach is so severe that the typical conservative voter despises Mitch McConnell, Paul Ryan, and John McCain more than Schumer, and Pelosi.

Roger Stone says that we have in the “Swamp” a “two-party duopoly”: false polemics by day, cocktails, dinner, and laughter by night. Mr. Bannon also refers to the Swamp as a “profitable business model” protecting the status quo.

For decades the conservative voters’ anger over the Republican establishment has been suppressed by people who felt they had nowhere else to go with their votes and money. Now Steve Bannon has given them leadership and viable political options. He is the conservative base’s divorce attorney, who will get the spurned woman out of a failed marriage by leading her into the arms of her new man.

In the early days of the American republic the nation was overwhelmingly Christian and conservative. Due to the loss of its faith and vigilance, the American republic has over time allowed an alien worldview to wreak havoc in all the critical institutions of government and life. A new conservative movement appeared on America’s political scene in the in an attempt to save the country.

It started with Father Coughlin’s radio attacks on FDR’s New Deal and the central bankers. This led to the America First movement of Lindbergh, then Goldwater. Then Nixon’s Southern Strategy, followed by Reagan’s conservative rhetoric, then by Buchanan and Perot. Perhaps this was a necessary progression to lay the foundation for the movement’s new advance with its new leader and spokesman, Donald Trump.

On June 16, 2015, with Trump’s announced run for the presidency, the real estate mogul became the new leader of the conservative movement. He changed the narrative from left vs. right and conservative vs. liberal to America First vs. globalism. The movement overnight altered the polemic from ideology to nationalism and from policy to national sovereignty.

If Trump is the movement’s chief spokesman, then Steve Bannon is his general and top strategist. Both men are made with the same alpha male aggressive stock – the kind of men a movement like ours so needs. They are modern men of exemplary courage – fearless and passionate in their love for the welfare of the people they represent.

In any political endeavor, success can only be achieved with courageous leadership. This is what the conservative movement has in Steve Bannon whose political genius also makes him a formidable leader. He has the courage not just to stand his ground, but to take the offensive and attack. He is able to give direction and encouragement, and to invent political rallying cries that mobilize others to fight.  An earlier battle cry was, “we are working to deconstruct  the administrative state.” His latest rallying cry is, “the elites have committed economic hate crimes on the working men and women of America.” This has proved to be the military standard held up for the troops in Bannon’s battle against the Republican elites. 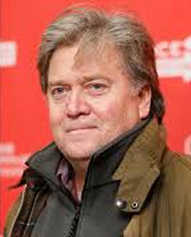 Steve Bannon, who, before 2015, was politically unknown, has come on the scene to give able leadership to the conservative movement in its next step in the battle for America. That next step is to root the establishment tares out of the Republican field.

Steve Bannon’s declaration of war against the ruling establishment is first a battle against Mitch McConnell and his National Senatorial Committee, which has for years funded and supported Republican campaigns of establishment men. Bannon has declared war on all the remaining establishment Republican Senate candidates who are up for re-election in 2018 with the exception Ted Cruz. Bannon and the Great America  PAC have been busy recruiting American nationalist candidates committed to the Trump agenda to unseat McConnell’s establishment choices.

Bannon’s plan is two-fold: Recruit American nationalists who will be faithful to Trump’s agenda to run against Republican establishment candidates, and to lay siege to McConnell’s supply lines of campaign funding tying the pariah Mitch McConnell to opposition candidates in the 2018 Senate primaries.

Bannon’s war strategy is one of EXPOSE-DIVIDE-REPLACE. Naïve conservative leaders seek Republican unity, but Bannon knows unity can only come when victory is achieved: when the Republican Party has been transformed as the people’s party and when true America First Republican nationalists dominate the halls of Congress. Till then, the conservative movement’s new general continues with his “expose, divide, and replace” game plan. Central to Republican unity is American interests, not the Party’s agenda.

“But the conservative unity that Never Trumpers seek won’t be coming back, even if the president leaves office prematurely. An apparently unbridgeable ideological chasm is opening between two camps that were once closely allied. Mr. Trump’s rise is the effect, not the cause, of this rift.”

Bannon often cries out about “economic hate crimes” committed by the establishment’s political class against the hard working American men and women. It is a genius phrase that profoundly resonates with much of the middle class who have seen their politicians more interested in serving the moneyed class of Wall Street and the multinationals than them.

The middle class may shuffle along with life in resigned acceptance of their decreasing financial circumstances, but deep down they know something is wrong at the top. They sense that the elites have rigged the whole system and that the politicians have not protected the voters’ interests. They still remember the massive loss of wealth in the Wall Street orchestrated mortgage scandal a decade ago, and how the federal government funded and secured the financial class, while hanging them, the hard-working citizens and voters, out to dry.

Bannon is raising the standard of resistance for this silent majority of Americans.

His resistance movement is nothing new in history. Wealthy men from antiquity to the modern age have schemed to secure government control for their own advantage and wealth creation at the expense of the people. Each time, the people eventually come to the end of their willingness to tolerate such abuse, and they begin to resist. We are at the “resistance” stage of this process in America.

Money used to be the critical asset in securing votes in federal elections. During this resistance stage of American political life, what once worked is no longer a guarantee of success. The massive amount of campaign funds spent on losing candidates and recent federal elections is unprecedented phenomenon in our modern political world. Here are three obvious examples:

HILLARY CLINTON: Hillary spent $1,191 million in the general election compared to Donald Trump’s $647 million. She out-spent Trump nearly 2 to 1 but was handily defeated.

LUTHER STRANGE: Big Luther, the Republican establishment darling, in the recent Alabama special election runoff was given $31 million by the McConnell Senate Committee and other PAC’s. The populist candidate Judge Roy Moore spent about $1.5 million. Moore won by a whopping 10 points, and his victory caused the announced retirement of Tennessee establishment Republican senator Bob Corker, and sent shock waves through the Republican political establishment.

What was once the mother’s milk of election victories’, campaign money, may now become a liability, especially if it is tied to Mitch McConnell.  Also, of great concern to the GOP hierarchy is the fact that McConnell’s corporate money may be dying out because typical Republican donors don’t like spending money on losers.

“We’re building a grassroots army,” Bannon said. “It’s going to be their money versus your muscle.”

After the excitement of Trump’s historic election victory, the Trump faithful became very concerned with the immediate efforts to destroy him and his presidency. They were far more troubled at the Republican establishment’s commitment not to stop until Trump was destroyed and run out of Washington than they were with any threat from the Democrats.

Bannon referenced those very same Republican elites at a recent rally for Kelli Ward in Arizona. Bannon said the “populist revolt is an incredibly powerful movement” of “working-class and middle-class people” who are fed up with the “permanent political class and the globalist set of elites that want to rule over you from an imperial city like a new aristocracy.”

The conservative movement needs to take the next step in its path to political maturity. That step is for its people to join forces with General Bannon and to help rout the establishment out of the Republican Party. This 2018 election cycle is critical to the movement’s goal to take back control of its government.

Everyone living in these crucial Republican primary states needs to help raise an army of supporters for these new pro-Trump primary candidates as they emerge. If you are not living in one of these states, then send money to these populist candidates and support the great American PAC. We are not going to be successful with the American-First agenda until these establishment Republicans are defeated and replaced.

About the Author: Thomas Ertl

Tom Ertl is a home builder in North Florida. For over three decades, Tom has worked with various Christian organizations, including Freedom Council in the ‘80s. He is a former member of The Council for National Policy and has served in numerous Christian ministry and political organizations. He is a member of a local Presbyterian Church (PCA). He also publishes Christian historical and theological works and is a columnist for NewsWithViews.Email: tomertl@comcast.net