President Donald Trump’s defensive action to protect the United States and the American people from radical Muslims seeking entry into the country was given at least a temporary go-ahead by the U.S. Supreme Court. The ruling was rendered by a 7-2 decision on Monday. 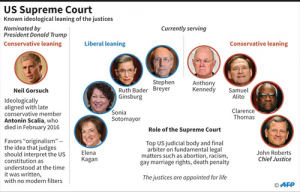 Trump’s executive order met with an enormous negative response by Democrats and the mainstream news media which intentionally misrepresented what was intended by the administration’s effort to prevent terrorist attacks like those occurring in France, Belgium, Germany, United Kingdom, Turkey and other NATO (North Atlantic Treaty Organization) member nations.

The nation’s highest court declared that lower court injunctions put in place against Trump’s so-called travel ban — plainly a misnomer — prevented the government from initiating enforcement of any of the challenged provisions.

In demanding a stay of those injunctions, the government cited the compelling likelihood of irreparable harm: “Pointing to the descriptions of conditions in the six designated nations, the government argues that a 90-day pause on entry is necessary to prevent potentially dangerous individuals from entering the United States while the executive reviews the adequacy of information provided by foreign governments in connection with visa adjudications. Additionally, the government asserts, the temporary bar is needed to reduce the executive’s investigative burdens while this review proceeds.”

Seven of the nine SCOTUS justices agreed with that argument.

The six nations involved and stipulated in Trump’s executive order are all Muslim-majority countries:  Iran, Libya, Somalia, Sudan, Syria, and Yemen. Those nations are in the Middle East and North Africa.

On January 27, 2017, President Donald J. Trump signed Executive Order No. 13769, Protecting the Nation from Foreign Terrorist Entry into the United States. 82 Fed. Reg. 8977 (EO–1). EO–1 addressed policies and procedures relating to the entry of foreign nationals into this country.

Among other directives, the order suspended entry of foreign nationals from seven countries identified as presenting heightened terrorism risks—Iran, Iraq, Libya, Somalia, Sudan, Syria, and Yemen—for 90 days. Executive officials were instructed to review the adequacy of current practices relating to visa adjudications during this 90-day period.

EO–1 also modified refugee policy, suspending the United States Refugee Admissions Program (USRAP) for 120 days and reducing the number of refugees eligible to be admitted to the United States during fiscal year 2017.

When Muslim organizations, Democrats and members of the news media displayed their outrage and misinformed the American voters, the most left-wing judges in the country provided Trump’s opponents with two temporary restraint decisions.

EO–1 was immediately challenged in court. Just a week after the order was issued, a Federal District Court entered a nationwide temporary restraining order enjoining enforcement of several of its key provisions. 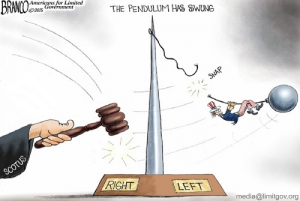 EO–2 describes “conditions in six of the . . . countries” as to which EO–1 had suspended entry, stating that these conditions “demonstrate [that] nationals [of those countries] continue to present heightened risks to the security of the United States,” and that “some of those who have entered the United States through our immigration system have proved to be threats to our national security.”

On the “First Monday in October” — traditionally the day the SCOTUS reconvenes each year — the Supreme Court will revisit the so-called travel ban.