The House of Representatives and the Federal Bureau of Investigation were seeking information on the transmission of the criminal records of military personnel to the FBI’s fingerprint and criminal history data bases following a killing spree at a Texas church.

The suspected shooter, who opened fire in the rural Baptist church had been court-martialed during his time in the U.S. Air Force for assault of his spouse and their child, according to military records obtained by ABC News.

The prolific killer, Devin Kelley, was identified by federal and state law enforcement officials as the shooter who killed 26 people and injured at least 20 others on Sunday morning in the First Baptist Church of Sutherland Springs, Texas. It was later determined that Kelley, 26, served from 2010 until 2014 and worked in the logistics readiness department at Holloman Air Force Base in New Mexico, ABC reported. 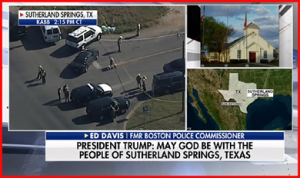 Kelley was court-martialed in 2012 on charges of assault on his spouse and on their child. He received a bad conduct [dishonorable] discharge, confinement for twelve months and a reduction in rank.

This evaluation was performed as a result of a requirement in the National Defense Authorization Act for Fiscal Year 1996 and of all the military branches’ police and investigative services, the NCIS had the worst record of compliance when compared to the other services but none of them came close to be efficient, according to the EVALUATION OF DEPARTMENT OF DEFENSE COMPLIANCE WITH CRIMINAL HISTORY DATA REPORTING REQUIREMENTS . https://media.defense.gov/1997/Feb/10/2001715391/-1/-1/1/crimhist.pdf

“As Chairman of the Military Personnel Subcommittee, I am committed to working with the Department of Defense (DoD) Inspector General [Glenn A. Fine]  to ensure that any systemic reporting issues by DoD to the National Crime Information Center (NCIC) are addressed,  and ensure every branch of our military is reporting as required,” Congressman Coffman said.

The Secretary of Defense was directed to provide a report to Congress on the consistency with which fingerprint cards and final dispositions are reported by the Defense Criminal Investigative Organizations (DCI0s) to the Federal Bureau of Investigation (FBI) for inclusion in the Bureau’s criminal history identification files.

The primary objective was to evaluate whether the DCIOs are reporting criminal history data to the FBI in compliance with DoD Criminal Investigations Policy Memorandum Number 10 (CPM No. 10), Criminal History Data Reporting Requirements, March 25, 1987.

In these types of cases, the U.S. Marshal’s Office usually does the fingerprinting and submitting of the final disposition report. Another objective was to evaluate whether or not other law enforcement activities of the Services collect and report information to the FBI and, if not, determine whether they should be reporting.

The MCIOs are not consistently submitting criminal history data to the FBI criminal history files. Based on the results of statistical sampling, the Army failed to send FD-249, Suspect Fingerprint Card, to the FBI in approximately 82 percent of its cases; the Navy 83 percent; and the Air Force 38 percent. Failure to submit the R-84, Final Disposition Report, in the Army was 79 percent; the Navy 94 percent; and the Air Force 50 percent. In addition to the MCIOs investigating offenses described in CPM No. 10, other Service law enforcement organizations conduct investigations described in CPM No. 10 and do not consistently report that data.