Finally, the cat is out of the bag. My book Partners in Crime: The Rockefeller, CFR, CIA and Castro Connection to the Kennedy Assassination is already available at Amazon.com and other bookstores online.

Writing this book has been a real tour de force for me. Though I have been interested in the Kennedy assassination for many years and I had been writing notes, most of which I incorporated into this book, the idea of writing a book about the JFK assassination came to my mind around April of this year. Having it ready before the end of the year was an apparently impossible goal, but worked hard and I accomplished it.

Though I began working based on my old notes, I realized that I had to become current with recent research, which, with a few exceptions, brought nothing new. Reading some of the new books about the Kennedy assassination was sort of frustrating, because most of them just repeated the very same old lies and misinformation told by the Warren Commission. Probably the most asinine of these books is Gerald Posner’s Case Closed. According to Posner, Oswald was a mentally disturbed individual who acted alone and there was not conspiracy behind him: case closed! 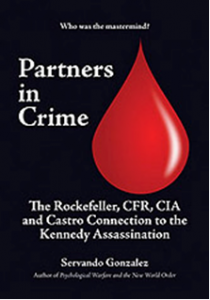 A book that I found useful, though, in what I call the assassination “post-cover-up,” is Oliver Stone’s JFK: The Book on the Film. Stone’s 1991 film JFK provoked a veritable tsunami of ad hominem abuse, insults, vituperation and vilification in, mostly by CFR members in the mainstream media, against both film director Oliver Stone and District Attorney of Orleans Parish, Louisiana, Jim Garrison. Stone’s film JFK was mostly based on Garrison’s suspicions that the CIA was behind the Kennedy assassination. Stone, an unrepentant liberal, was the first surprised by the fierce opposition and relentless attack on him and his film, which began even before it was shown in theaters. Evidently, Stone had no idea of what his opponents’ true motives were.

When I read books, sometimes I agree with the author, sometimes I disagree, and sometimes I even strongly disagree. If I write a review, I avoid personal criticism and try to be as specific as possible about the points on which I disagree with the author. There is, however, a book I read during my research whose author’s opinions really incensed me. I am talking about David Talbot, whose book The Devil’s Chessboard I read because it was highly recommended by the critics.

Talbot, a San Francisco bleeding heart “progressive” liberal, is the former editor in chief of Salon.com. In a 1213 article, Talbot strongly criticizes author Philip Shenon because in his book about the Kennedy assassination, A Cruel and Shocking Act, “following the conspiracy trail Shenon quickly takes a wrong turn down the ‘Castro-as-mastermind’ path.”[1]. One must keep in mind that most American “progressives” follow the line created by CFR reactionaries that Castro is untouchable. So, in Talbot’s view, pointing to Castro as a possible culprit in the Kennedy assassination turned Shenon into a conspiracy nut.

Nevertheless, in 2013 Talbot published The Devil’s Chessboard, a book that is a notable addition to the post-cover-up disinformation campaign.[2]

In his book, however, Talbot not only didn’t mention that Castro was the only one of the suspects who publicly threatened the Kennedy brothers with assassination, but puts all the blame for the JFK assassination on Allen Dulles. But, as one of the book’s reviewers in Amazon.com pointed out, “Talbot has rightly castigated the Dulles brothers but is remiss in examining their puppet masters, the real wire-pullers.”

Nevertheless, I don’t think that Talbot’s omissions and errors are the product of sloppy research or faulty analysis of the facts. I think that Talbot is a dishonest writer who pushes his own political agenda regardless of the facts. Proof of this is that, far from mentioning Castro’s possible links to the JFK assassination, he devotes thirteen pages of his book to paint a rose-colored, disingenuous image of Fidel Castro as a Latin American hero.[4]

As the saying goes, however, every dark cloud has a silver lining. Perhaps taken by his admiration for the two assassins, Castro and Guevara, Talbot expresses his approval because Castro, “was not only intellectually formidable and politically fearless; his dream of national liberation was backed up by guns,” and also because Castro and Guevara, “put the hard-core thugs of the old regime against a wall,” and shot them.[5]

So, if you believe the fancy tale that the “progressives” drive to take your guns is because they want to make America safer from violent crime, you are wrong. Actually, they don’t want you to be armed when they knock at your door to take you to the wall to be shot, and we should thank Mr. Talbot for reminding us about that.

Speaking about the death of the Cuban tyrant, President elect Donald Trump said: “Fidel Castro’s legacy is one of firing squads, theft, unimaginable suffering, poverty and the denial of fundamental human rights.”[6] Evidently, this is a legacy that David Talbot and his liberal progressive friends in San Francisco and Berkeley love from the bottom of their hearts. That’s why I always call them “regressives.”