The Amazing Empathy Of Our President Trump And First Lady

Too often we underestimate the power of a touch, a smile, a kind word, a listening ear, an honest compliment, or the smallest act of caring, all of which have the potential to turn a life around.” — Leo Buscaglia

Our President has stood with the great, and he never brags about it or counts it as glory.  He is kind and gentlemanly and open and honorable in representing our country, and foreign dignitaries and leaders appreciate and like him.

Sitting with the Broken

But when he sits with the broken, he’s the upstanding and noble President we elected, and he’s done it over and over and over and over again in just this first year of his presidency.  He doesn’t go play golf, he doesn’t give a speech, he gets on Air Force One with his wife and a few others and he goes to where the pain has occurred.  He went to Texas after Harvey, he went to Florida after Irma, he went to Puerto Rico after Maria, and he’s now gone to Las Vegas after the horrific and evil murderous actions against grassroots Americans, many of whom probably voted for him. 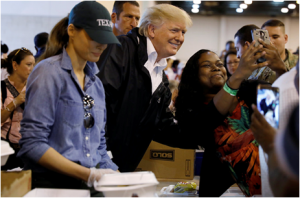 In Houston, Texas, people who never thought of voting for him fell in love with the man who came to help them, to show them that he cared, and to allow them to touch him and take multiple pictures with him.

They now know what kind of man he is.  The same thing happened in Florida.  He passed out food, allowed pictures to be taken and mingled with the people as though he’d known them all his life.  The empathy of this President is something I’ve not seen for a long, long time.  And it’s real, it’s not fake glory for the cameras, it’s a heartfelt desire to make things better for people who are suffering. 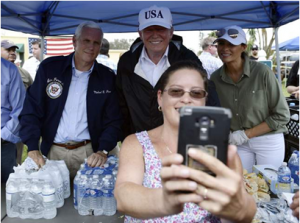 Puerto Rico is terribly devastated.  It needs to be rebuilt from the ground up, electric, gas, stores, homes, water, everything was destroyed.  It takes a long time to totally rebuild an island, and the filthy leftist commie rags of the MSM are berating our President for not doing it in a New York second.  I’d like to see them down there actually helping rather than criticizing.  FEMA has partnered with private volunteers and we even have national guard there helping.  They are literally carrying 100-pound backpacks of survival gear into areas that trucks cannot reach. And yet, this filthy media who hates our President says he’s not doing enough.

Well, let me tell you, he was there in Louisiana last year when Obama kept playing golf and Hillary kept sleeping.  Think about that. 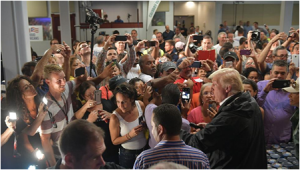 The tax dollars of Americans are going to all these areas to help them recover.  We have not had hurricanes for 12 years, and this year has been horrendous.  To hear Hollywood or the media tell it, you would think Trump actually caused these devastations.  Their inane comments have convinced Americans to never watch their movies or media garbage again.

Multi-millionaire Jennifer Lawrence suggested the devastating hurricanes in Texas and Irma in Florida were signs of “Mother Nature’s rage and wrath” at America for electing Donald Trump and not believing in man-made climate change.  Right Jennifer, why don’t you go live in Commie Cuba and see how you like it, or maybe Argentina or Venezuela would suit you better.

And only God knows how much of our President’s own funds have gone to help these people in need after this devastation.

Remember the tragedy in Orlando, Florida at the Pulse Nightclub where 50 people died because of a lone gunman, Omar Mateen, who shot and killed them at will?  This was a murderous tragedy against homosexuals by an alleged Islamist.  Our President came out and stated that the Constitution covers everyone and this was a horrible tragedy perpetrated against American citizens.  He was right, and his caring and empathy showed through even when he was campaigning.

As opposed to the NFL ‘tough guy’ who walked out wearing his Everybody vs. Trump shirt (before hiding behind the coaches while he sat his butt down for the anthem), this Las Vegas shooting victim showed us all what tough really looks like.

And what an amazing man, shot in the leg, and hurting, and refuses to stay prone in bed when his President enters his room.  First, he stands up to greet Melania, and she protests, “Don’t get up, don’t get up.”  So, he sits back down while waiting for President Trump to enter his room, and obviously it takes some effort.

Gunderson wrote, “I will never lie down when the President of this great country comes to shake my hand!  There may be plenty of issues in this country but I will always respect my country, my president and my flag. Shot in the leg or not, I will stand to show my President the respect he deserves!”

On Gunderson’s patient board in his hospital room, he also had the hashtag ‘#MAGA’ written under the statement: “What’s important to me.”— DailyMail

When President Trump enters his room, he’s on his feet with an outstretched hand.  Tom Gunderson was running from Mandalay Bay when a bullet tore through his leg.  The President says to him, “This looks like a tough guy to me.”

The President asks him how it’s going, and points to his leg, and Tom Gunderson says I’m okay, and stands to shake the hand of the most powerful man in the world.

God bless them, all the people who were injured, and those who lost their lives when they were just out to enjoy a country music festival.  God be with them, and with those who mourn for their great losses.  And God bless and keep our President who really loves the American people.