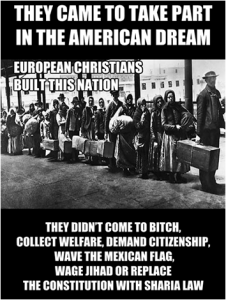 As a candidate, Trump pledged to “immediately terminate President Obama’s two illegal executive amnesties.”  So, why is our president repeatedly expressing empathy with the participants in the Deferred Action for Childhood Arrivals (DACA)?

Now he is saying to Congress, “Legalize DACA or I will revisit it.”  What? Supporters of Trump have already said they will exit the Trump train if he legalizes illegal aliens who broke the law.  Daily Caller says Trump is allowing Dreamers to stay and even Rush Limbaugh is fine with it.  Excuse me Rush, but this is screw the taxpayer again!

Illegal aliens, who are eligible for DACA needed to have entered the United States illegally before 2007 and be 15 or younger at the time of their arrival. They also had to be younger than 31 years of age when DACA was officially created in June 2012.

Although there are over 1.3 million people who are eligible for Obama’s DACA program, of those who applied, approximately 800,000 individuals have it.

New research has shown that DACA itself is a jumbled mess of fraud and unaccountability.

“As many as half of the approximately 800,000 people who now have work permits under DACA may have lied on their applications to get approved,” said Matt O’Brien, an attorney and until last year a manager in the investigative unit of the U.S. Citizenship and Immigration Service (USCIS).

“Based on what I had seen and what I discussed with my colleagues, the fraud rate is 40 to 50 percent. It’s possible that it was higher,” he told LifeZette this week.

So why in hell would we want to give these lawbreakers and liars free citizenship in the United States?  And why doesn’t the Trump administration know this?

Many participants, referred to euphemistically as “dreamers,” arrived in the United States as small children and have little recollection of their birth countries. DACA does not give them residency status, but temporarily protects them from deportation and allows them to work legally. The protection can be revoked at any time and some of these illegals have lost their DACA protections after being arrested for vicious crimes, yet many are still not deported.

What about American families who have lost loved ones because Dreamers murdered them?  Is there no sense of protection for American citizens?  Apparently not, because illegals, and I include Islamic refugees, continue to rape, murder, and destroy citizens of this country.

A man charged with multiple murders was erroneously shielded from deportation under DACA, despite gang ties.  And, sympathetic media has scrambled to trot out shiny Dreamers, but forgets all the nightmares, and the nightmare list is very long.  Link

Then there’s the parental program, Deferred Action for Parents of Americans, or DAPA, which was blocked by a federal judge in Texas after 26 states sued. Republicans saw it as a “backdoor amnesty” and argued that Obama overstepped his authority by protecting a specific class of immigrants living in the United States illegally.

These illegals need to be deported because they broke the law to get here.  Sound harsh?  Not really, when you realize some of these “children” were teens when they came here.  If they haven’t any relatives in any state who could take them in, then fine, let them stay. However, if they have one family member in another nation, they need to go back and immigrate legally as our ancestors from Europe did when they came through Ellis Island.

That leaves us, the taxpayers, who should be screaming at the top of our lungs about these illegal alien lawbreakers milking us for decades.  Yet we have a bunch of socialists in Congress who don’t give a rat’s ass about the taxpayers.  Needless to say, it’s why we must be screaming constantly at these rotten “servants” of the people.

Why is Trump giving Congress six months to do something?  This was an Executive Order by Obama that should have been undone and the majority of these people deported to their countries of origin. DACA creates an amnesty and the infamous and euphemistic sounding “path to citizenship” for illegals who violated American territory with their illegal invader parents.  It is nothing more than an extension of the anchor baby concept to foreign-born non-citizens.  Senator Jacob Howard, who introduced the 14th Amendment’s citizenship clause, said its grant of citizenship would not include persons born in the United States who are foreigner or aliens.  So, who changed it?

The anchor baby scam was invented 35 years ago by a liberal zealot, Justice William Brennan, who slipped a footnote into a 1982 Supreme Court opinion announcing that the children born to illegals on U.S. soil are citizens.  Unconstitutional poppycock.

Our President has said the Dreamers have no reason to worry, but American citizens have big reasons to worry since this is now in the hands of Congress and a Republican party who is not capable of governing. 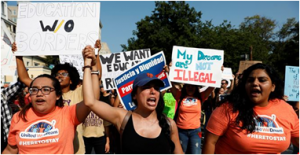 Pelosi and her fellow democrats, led by Luis Gutierrez and his Latin supremacists, filed a discharge petition to begin the trickery that could ultimately lead to a vote on the so-called DREAM Act, and I mean an immediate vote.  Knowing the desire of both the left and right for amnesty and their fake bleeding-heart liberalism, they will easily pass this and send it to lily-livered McConnell, who will not promote the votes to kill it, and it will go to the President’s desk.

Even if the President vetoes the rotten amnesty, these vile Trump hating spineless weasels in our Republican Majority Congress, will spit in his face and override the veto.  That’s what Trump is dealing with. 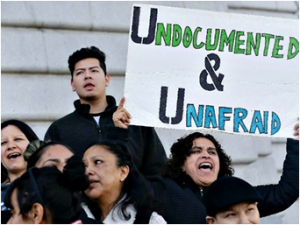 Of course, the Associated Press refers to these illegal aliens as undocumented citizens.  Oh yes, I really want these demanding lawbreakers given free citizenship in the United States, when my ancestors worked hard to get here, and worked hard to make America a great country.

Steven A. Camarota, research director at the Center for Immigration Studies, crunched the numbers and found that the number of illegal immigrants will drain nearly $750 billion from taxpayers over their lifetimes — amounting to six times the deportation costs, and that’s only for 11 million.  We all know it’s up to 50 or 60 million illegals.  Multiply $750 billion by 5.5 more million and see what it’s costing us.

The feds have replaced America’s aborted babies with these illegals, many who never assimilate into society as our European ancestors so willingly did.

“Sometimes people say, look we couldn’t deport everybody because it’s prohibitively expensive,” Mr. Camarota said. “But if your only concern is fiscal cost, it’s pretty clear that letting them stay is a hell of a lot more expensive.” 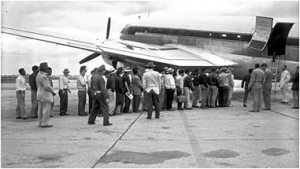 Deportation in the Past

Eisenhower deported over a million illegal aliens in 1954.   They were loaded onto trains, buses and planes and deposited deep in Mexico’s interior to prevent them from returning.

Back then, prominent U.S. senators were troubled by a government program that allowed some Mexican workers to enter the country legally. Sens. Herbert Lehman, D-N.Y., and Hubert Humphrey, D-Minn., the Chicago Tribune reported, “charged that the recruitment program makes it easy for Communists and other subversives to enter the United States.” Lehman estimated the daily flow of troublemakers as “perhaps many hundreds.”

Well, today it is far more, and we have become overrun with illegal aliens and Islamic refugees, the majority of whom are sucking America’s funds dry and have put us in debt that will never be repaid, and that’s not to mention the death and destruction caused by these aliens.

“President Donald Trump’s son-in-law set up a secret back channel to help a top Democratic Senator lobby White House officials in favor of the “DACA” amnesty for 800,000 young illegals.  [Link] 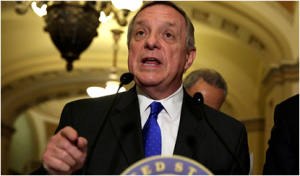 Socialist Sen. Dick Durbin, the second-ranking Democratic Senator, spilled the beans in an interview with Reuters, where he described how he worked with Jared Kushner and liberal Republican Sen. Lindsey Graham to promote the DACA amnesty in April and July.

In addition, Durbin said there had been telephone calls between him and Kushner as well as calls and meetings with then-Homeland Security Secretary John Kelly, now chief of staff. They had, and increasingly still have, President Trump surrounded with the globalist mindset.

Sessions apparently wants DACA destroyed, as does Steve Miller, who understands MAGA, but we’ll have to see how long Steve lasts with a McMaster bullseye on his back.

DACA and DAPA and every other illegal amnesty needs to be destroyed.

A Drexel University professor has openly encouraged people to destroy government property of ICE vehicles in order to stop DACA deportation.  Not only should he be charged with inciting illegal activities, but he should be fired from Drexel.  George Ciccariello-Maher teaches Global studies at Drexel University, and he made headlines last December when he tweeted out that the one thing he wanted for Christmas was “white genocide.”  This bozo is a white boy.

Given the competitiveness of admissions, it is all the more outrageous that the University of Miami is offering Dreamers a full scholarship worth $62,000, as well as lower GPA and SAT standards. [Link]  The Dreamer scholarship is “renewable for up to four academic years or such time as is required to complete the baccalaureate degree.”  So, illegals who have broken the law get a free ride, while again American taxpayers take it in the arse.

To top it off, Janet Napolitano, former Sec. of Homeland Security under Obama, filed a lawsuit  protesting the phase out of DACA by the administration, declaring that it is being done by executive whim. Maybe Trump should have just had his DHS Secretary write a memo. Then they could treat it as if it were a law.

The reality is that DACA is still growing, they’re not sending their best and brightest (never have), it will cost Americans and their government a huge amount of money, it encourages more illegal immigration, it imports crime, it helps democrats, and it is fundamentally illegitimate.  [Link]

P.S.  We must fight for what is right, if we don’t, then the loss of this great nation will be on our shoulders.  The same goes for NewsWithViews.  It is up to all of us to keep the free flow of information available.  Thank you for continuing to help NWVs stay alive and coming into your mailbox every morning.  Please donate here.