Though those that are betray’d Do feel the treason sharply, yet the traitor Stands in worse case of woe.  —William Shakespeare

Six directors of Eagle Forum (the gang of six) have a hidden agenda, and most refused to return phone calls personally made to them by Phyllis to ask what their concerns were.  Phyllis eventually asked these six to resign and they refused. They were led by her youngest child Anne Cori, and included Eunie Smith, Carolyn McLarty, Rosina Kovar, Shirley Curry, and Cathie Adams. 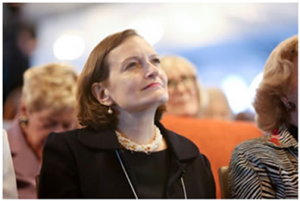 Phyllis was always loyal, actually loyal to a fault because she forgave, a true Christian.  She didn’t know how to give up on people, and her sense of humor carried her through even in troubling times.  She believed the good in those she loved.  It wasn’t until she was walked on so many times, that she had no choice but to let go of those who burned holes in her heart, including her very own daughter.  That’s when she asked these traitorous women to resign and they refused.

The gang of six wants control, and their goals are anathema to those of Phyllis Schlafly, who championed pro-life, fought the calls for a Constitutional Convention and upheld the sovereignty of America.  They are led by Phyllis’s youngest daughter, Anne Cori.  Anne’s husband is Tom Cori, a former corporate raider and member of the Carnegie Institute for Science, founded in 1895 by Pilgrims Society member, Andrew Carnegie.

It is this latter Institute for Science which is of interest. Tom Cori, husband of Anne Cori, is a Trustee. If you scroll to page 21 in the Carnegie Institute website, you will see Tom and Anne Cori listed as individuals who have made lifetime contributions of between $100,000 and $999,999.  This Institute promotes many freedom destroying programs, including common core and climate change.

These goals are anathema to Phyllis Schlafly’s Eagle Forum.

A year ago, I wrote, Treachery from Inside Eagle Forum Family, describing what occurred at last year’s Eagle Forum Council meeting where the gang of six and their cohorts attended and not only went against court orders, but were at times disruptive.

This year, the Gang of Six held their own Eagle Forum council meeting in D.C. a week before the real Phyllis Schlafly Eagle Council in St. Louis.

Heritage is a bastion of phony conservatism.  Heritage Fellow and CFR member, Richard Allen, wrote the job destroying NAFTA trade deal and President Ed Feulner described the passage of NAFTA as one of Heritage’s most important “scalps” or “victories.”

Assuring Affordable Health Care for All Americans was the Heritage Foundation plan, exposed in a monograph written by Stuart M. Butler. Item #2 on page six of the document states, “Mandate all households to obtain adequate insurance.”

Beverly LaHaye is the founder and CWA is a competitor to Eagle Forum.  She is the wife of now deceased Tim LaHaye, one of the founders of the rightwing Council for National Policy.  Beverly would often feature CFR and Trilateralist members at her yearly conferences.

TPP has always been in bed with the likes of neo-cons McConnell and Ryan.  They are a very pro-Con-Con organization headed by anti-Trumper, Jenny Beth Martin, and co-founded by Mark Meckler, who is massively promoting a Convention of States.  Link

Tony Perkins is President of FRC.  He is another Dominionist and is actively campaigning for a Constitutional Convention.  In fact, his organization is promoting Judge Roy Moore of Alabama for AG Sessions former seat.  Moore is for a Con-Con and is a fellow Dominionist. 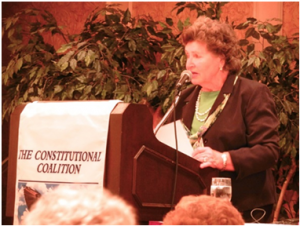 The Executive Director is Donna Hearne.  She is also Encounter Host on Bott Radio Network St. Louis.  Hearne killed Phyllis’s national radio show and deleted all references to Phyllis and her archives from Bott Radio.

Hearne personally fixed the township election so that Phyllis would be defeated for Delegate to the Republican National Convention.  Despite Hearne’s treachery, Ed Martin saw to it that Phyllis was a delegate as planned, and she spent two weeks at the convention.

Donna Hearne has sponsored many of the Reconstructionist/Dominionist professors and pundits for years at her conferences. This likely plays into the reason she was a Cruz supporter. Cruz, his father, and many of his supporters, are Dominionists/Reconstructionists. They include David Barton, Flip Benham, Kevin Swanson, Tony Perkins, (president of the Family Research Council), would-be reality TV stars the Benham brothers, and Houston activist Dave Welch. Perkins is also a United Nations Non-Governmental Organization member.

Barton and his “Wallbuilders” are big promoters of the “Convention of States.”  They took over the first night of the rogue Eagle Council event in D.C.  The pro-Con-Con Wallbuilders led attendees through their view of history as part of a Capitol “tour.”  Phyllis’s Collegians conference had a Capitol tour last month for students, but without the Con-Con promoters.

The controversy regarding Barton’s writings is widespread and he has been taken to task by conservative history professors on his questionable Jefferson quotes.  Nelson Publishing pulled Barton’s books from the shelf, and fellow Cruz supporter, Glenn Beck, picked it up and published it, despite the falsehoods.

Back in 2011, Barton went on the John Stewart Show and actually stated that Sharia and the Constitution were compatible.  Barton is another dominionist and was a strong Ted Cruz supporter. [Link]

Bachmann is pro-BBA and leans toward dominionism.  She was the Oral Roberts trained Word/Faith Congresswomen from Minnesota.  In 2011, she supported the Balanced Budget Amendment, which no one seems to have actually read except those who know the dangers of a Con-Con. [Link]  Both BBA bills would drastically transform our Constitution as well as raising our taxes, and would lead to an Article V convention. 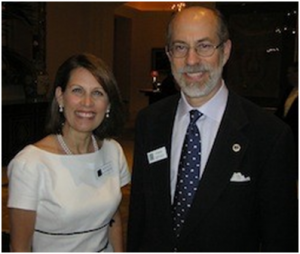 Gaffney is another Dominionist, and was also a guest speaker at the rogue council.  Both Bachmann and Gaffney supported Ted Cruz for President, and the latter was on Cruz’s advisory board. [Link]

Bachmann’s biggest contributor while in Congress was none other than pro-amnesty Club for Growth according to Open Secrets.  Club for Growth spent millions in Iowa campaigning against Donald Trump.

Michele Bachmann was interviewed by Phyllis Schlafly for the position of President of Eagle Forum, but was rejected.

Senator Lee now favors using Article V to amend the Constitution.  Initially he was against it, but has changed his mind after reading Mark Levin’s book and having several discussions with him.  Both these men are lawyers, and obviously neither worry one iota about the 1787 precedents and how our Constitution, once opened, will be thoroughly destroyed and replaced with the Ford and Rockefeller written New States Constitution, which first appeared in Rexford Tugwell’s book, The Emerging Constitution.

Last year, the RNC Rules Committee members from Utah were Senator Mike Lee and his wife, Sharon Lee.  Both were Cruz supporters who hoped to derail Trump.

Lee also supports legislation that will bring more Muslims into America. In January of 2015, a handful of Senators quietly introduced new legislation in Congress that would allow for virtually unlimited Muslim immigration into the United States – lifting caps entirely on several categories of visas favored by immigrants from Muslim countries. The Mark Zuckerberg-backed legislation, S.153, is called the Immigration Innovation Act (or I-Squared). Link

Sen. Lee was aligned with liberal Democratic Sens. Patrick Leahy of Vermont and Dick Durbin of Illinois to ease mandatory minimums for certain crimes, and is uncomfortable with such binding punishments for immigration offenses. He even threatened to oppose sanctuary cities legislation that includes mandatory minimums.

Ginni Thomas is the wife of Supreme Court Justice Clarence Thomas and was also a guest speaker. 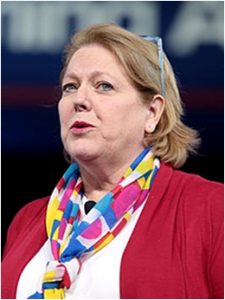 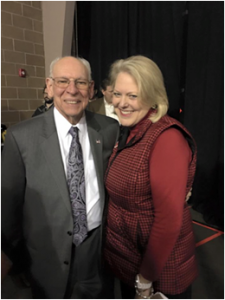 I’m surprised that she and her husband would attend without doing more investigation, but perhaps her allegiance lies with other guests and sponsors.

She is close with Family Research Council, Heritage Foundation, and Pete Sepp, Executive Vice President, National Taxpayers Union.  The latter of which was founded by James Dale Davidson, who long promoted a Constitutional Convention, and gave $100K per year towards that goal.

Davidson actually physically threatened Phyllis regarding her stance against the Con-Con.  Phyllis would have me call in to her radio program and tell people about the NTU and Davidson, and their plans for destroying our Constitution.

The real Phyllis Schlafly Eagle Council will meet this week in St. Louis at the Airport Marriott Hotel.  Special guest speakers include David Horowitz, Corey Lewandowski, Boris Epshteyn, and Congressman Steve King.  And, in a coup late in their planning, they nabbed Steve Bannon!  He will be receiving the Phyllis Schlafly Award on Sunday at lunch.

This is the place to be!  Great conservatives will be there!

Phyllis Schlafly repeatedly said that defeating the Con-Con is the number one effort we need to be involved in, anything else we’re fighting will be moot if we lose our 1787 Constitution.

Today it is even more dangerous.  A case can be made that the movement for an Article V convention would be an open door for Sharia.  Amil Imani’s latest article makes that clear, Understanding The Threat Of Sharia Law in America.

The Rogue EF group having pro-Con-Con presenters at this pivotal time in the Con-Con battle is certainly not something Phyllis would have allowed or wanted. Our real grassroots Eagles will defeat Con-Con just as Phyllis helped to defeat it in the mid-80s.

Phyllis herself anticipated that Barton and other Con-Con promoters might try to slip it into the Republican platform in Cleveland, and indeed a Con-Con lobbyist attempted that, but our side was ready and resoundingly defeated it.

While grassroots Eagles have been working hard to defeat the Convention of States, Barton brags [here] that he has been writing state legislators urging them to pass it.  Yet Barton’s organization is picked by this rogue group to present to their small number of attendees.

Phyllis’s Eagle Council in St. Louis on September 21-24 will feature presentations and attendees who oppose the Convention of States, and who helped win an 18-4 victory against it in the States this year despite the lack of help by the group Phyllis asked to resign.

Phyllis was more than right when she chose to back Donald J. Trump for President.  I thank God we have him in our White House and Hillary Rodham Clinton was relegated to the dust bin.