The Birth Of Shi’a Islam

The Prophet Muhammad is an important figure in the Islamic world. In fact, most Muslims believe that humanity could do no better than to follow its dictums as well as to emulate Muhammad’s own life example for a guarantee of bliss and salvation.

Following the death of the Prophet Muhammad, his followers went into a state of frenzy as to who should become Muhammad’s successor. This dispute led to the creation of the Shi’a sect of Islam. Due to political motives and the Persians’ resentment of Sunni Arabs for a variety of reasons, they decided to follow the lesser of two evils: Shi’ism.

Although the basic differences between the Sunnis and Shi’as is about power, throughout the centuries, Shi’ites, for instance, considered the Sunnis as traitors to Islam, and Sunnis in return denounced the Shiites as heretics. Each side judges the other worthy of death and hellfire. 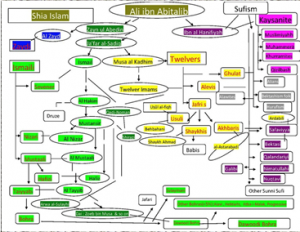 In the mind  and eyes of the Shi’as, the crucial evidence of Ali’s legitimacy as the successor to the Prophet is the event of Ghadir Khumm when the Prophet chose Ali to the “general guardianship” (walayat-i ‘ammah) of the people and made Ali, like himself, their “guardian” (wali). But this story has been refuted by Sunnis.

After ‘Ali’s assassination, the fourth Caliph in Kufa, it stipulated that the Caliphate be reinstated to the house of the ill-fated Caliph. This legal privilege on behalf of ‘Ali’s descendants is the creation of Shi’a dogma.

This Islamic war on the religion of peace is not confined to the Shiite-Sunni divide. There are so many internal divisions within each side that listing and exposing them meticulously would be an encyclopedic work.

Study of vast Islamic literature illustrates that the present sect of Shi’a Islam has evolved from a mix of cultural, political, economic, and religious influences.

The Twelver or Imami Shi’a Islam or Twelve-Imamates (ithna ashariyya) is the largest branch of Shi’a Islam.  Adherents of Twelver Shi’ism are commonly referred to as Twelvers, which is derived from their belief in twelve divinely ordained leaders and mediators between Allah and Man.  These are Christ-like figures on earth, also known as the Twelve Imams.  The Twelver’s’ central belief is that the Mahdi is expected to appear and save the world when it has reached the depth of deprivation and despair.  Nearly 85% of Shi’ites are Twelvers, and the term Shi’a Muslim commonly refers to Twelver Shi’a Muslims only.  (Ismailis sometimes are called the “Seveners” instead).

The Shi’as believe in the infallibility of the twelve Imams and in their divine inspiration—vision that the Sunnis consider as contrary to the traditions of Islam.

Over four decades after the dreadful Islamic invasion of 1979 in Iran, the smothering rule of Shi’a Islam casts its death-bearing pall over Iranians. A proud people with an enviable heritage is being thoroughly purged of its sense of identity and forced to think and behave like barbaric and intolerant Muslims.

If we put this in perspective, Persians don’t have a dog in this internal Arab dispute. In fact, Iranians should rid themselves of all Islamic stains, Shi’a, Sunni, or whatever, and with that, stop playing victims of one power or another. Islam, no matter what version, was never able to fully assimilate into the highly-sophisticated Persian culture and it remains solely within the desert dwellers’ culture of the Arabian Peninsula. This is one reason that Iranians, unlike Egyptians and other countries, never surrendered to Islam and refused to become Arabized and kept their language and culture.

To summarize: Muhammad died and did not leave a written will (he was illiterate, that’s understandable). So, his high-ranking disciples began scheming for leadership. The Shi’as claim that Muhammad verbally indicated that Ali was to lead his Ummah.

This event has become the most important event in the Shi’as calendar during the yearly Ashura procession, commemorating the martyrdom of the third Imam, al-Hussein. Processions of thousands of men present a public display of drama and lamentation, in some places including a passion play depicting the story of Imam Hussein’s martyrdom—even though human representation is forbidden in Islam.

In short: the legacies of Imam Ali and his son Hussein continue to be an important motive for the survival of the Shi’a sect and has become part of their yearly ritual. However, many Iranians refer to this era as the Islamic darkness. According to Shi’as, the death of Imam Hussein has also led the Shi’a to believe in the concept of martyrdom at the hands of Islamic false leaders: The Sunnis.