The Burden Against Damascus

On Friday, the United States, along with Great Britain and France, bombed three targeted chemical weapons facilities in Syria.

The targeted strikes on Syria were a retaliatory response following Syrian President Bashar al-Assad’s alleged use of chemical weapons against civilians outside Damascus, reportedly killing at least 42 adults and children. After the chemical weapons attack, U.S. President Donald Trump vowed to exact a “big price” upon the Assad regime. 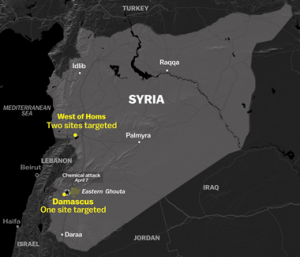 President Trump spoke after the strikes, saying that the United States was “prepared to sustain this response until the Syrian regime stops its use of prohibited chemical agents.”

Russian President Vladimir Putin called the strikes an “act of aggression that could have a destructive effect on the entire system of international relations.” Iran’s supreme leader Ayatollah Ali Khamenei called the strikes on Syria “a crime.”

Scripture prophecy declares that Syria will be a burden to the civilized world, until Damascus is one day utterly destroyed.

ISAIAH 17:1 (NKJV):
The burden against Damascus.
“Behold, Damascus [SYRIA] will cease from being a city, and it will be a ruinous heap.”

Damascus is the capital of Syria and currently its largest city with a population of just over 1.5 million as of 2018. Located in southwestern Syria, Damascus is a major cultural and religious region and the center of a large metropolitan area, which is perhaps the oldest, continually inhabited city in the world.

Scripture prophecy declares that Damascus will cease from being a city and it will be a ruinous heap.
WARS AND RUMORS OF WARS

MATTHEW 24:6-7; MARK 13:7-8 (NKJV):
“And you will hear of wars and rumors of wars. See that you are not troubled; for all these things must come to pass, but the end is not yet. For nation will rise against nation, and kingdom against kingdom.”

American and Russian tensions have been high during the months leading up to October, 2016. American and Russian politicians have been saber rattling over Syria. Russia is backing Syrian President Assad and is seeking to destroy the ISIS terrorists who cause instability around the world. America wants the Assad regime toppled and is even willing to back ISIS terrorists to help them achieve that goal.

The American – Russian political disagreements over Syria have led many pundits, the American mainstream media excluded, to conclude that the current American – Russian tensions may lead to World War III. Scripture prophecy foretells that there will be no WWIII between America and Russia, but instead a great tribulation of numerous regional wars throughout the world after America (Babylon the great) is destroyed (Revelation 11:12-19, 14:8, 18). Events will unfold  that will lead to the destruction of Damascus, Syria, which will cease to be an inhabited city.

One of four forces is most likely to destroy Damascus, to make it a ruinous heap: America, Russia, civil warring factions within Syria, or Israel.

DAMASCUS, SYRIA WILL BE DESTROYED BEFORE AMERICA IS SIMILARLY DESTROYED

JEREMIAH 50:18 (NKJV):
Thus says YHWH (the Lord) of hosts, the God of Israel:
“Behold, I will punish the king of Babylon [PRESIDENT OF AMERICA] and his land [AMERICA], as I have punished the king of Assyria [PRESIDENT OF SYRIA].”

There will be wars and rumors of wars. The talk of America and Russia going to nuclear war in World War III is a rumor of a war. Damascus, Syria will cease from being a city and it will be a ruinous heap. Sometime after the destruction of Damascus comes to pass, Russia will lead a great assembly of nations (Jeremiah 50:3,9,41-46), will disable America with a cyber / EMP attack (Jeremiah 51:32), and then destroy America in one hour (Revelation 18:10,17,19). America will not retaliate (Jeremiah 51:56; Revelation 18:9-11).  Russia will destroy America as Damascus was destroyed. America and Russia will not go to war before Damascus is destroyed, nor will Russia destroy America before Damascus becomes a ruinous heap and an uninhabited city. America will also have a sitting male president (king of Babylon), not a female president, when it is destroyed.

This is the order of things according to Scripture prophecy and Scripture will be fulfilled, as it is written.