Home/November 2020, Opinions/The Choice is Ours, Trump and Freedom or Biden and Slavery

The Choice is Ours, Trump and Freedom or Biden and Slavery

The function of wisdom is to discriminate between good and evil. —Marcus Tullius Cicero

What country can preserve its liberties if its rulers are not warned from time to time that their people preserve the spirit of resistance? Let them take arms. —Thomas Jefferson

Freedom is not a gift bestowed upon us by other men, but a right that belongs to us by the laws of God and nature. —Benjamin Franklin

A few days ago, I was in our front yard and one of my younger neighbors walked over to chat about a garbage collection problem in our neighborhood.  She commented she had to go in and change clothes because she and her husband had stood in the rain for 45 minutes to vote.  This young home-schooling mom told me that because they have two little boys, they want their children to grow up in the America of Life, Liberty and the Pursuit of Happiness, not an America taken over by communists.

Directly across the street from me and next door to this young couple are my liberal democrat neighbors with signs for Biden/Harris and every other local democrat, but also homemade signs that are pointed at Trump supporters.  One says, “Worst POTUS Ever.”  They are retired teachers and the young couple who live next door to them actually had them as teachers in high school.  In 2016 and 2020, we’ve proudly displayed Trump signs in our yard, and in 2016 our liberal neighbors kept their Hillary sign up for six months after she lost the election.

The choice is ours…freedom or slavery.  Our young neighbors are choosing freedom. 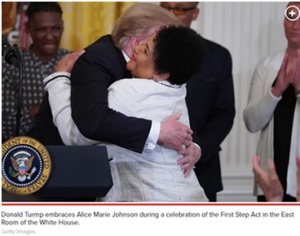 To our president, communism is anathema to freedom, liberty and our Constitution.  He was trained and led by his father to hear the truth of communism and its dangers in one of Manhattan’s most venerable sanctuaries, Marble Collegiate Church on Fifth Avenue where Norman Vincent Peale spoke against communism nearly every Sunday.

In those days, there were amazing men of God who preached the truth, something we lack today, and why so many churches are suffering.  Watch Bishop Fulton Sheen’s The Glory of Being an American; he was a man who preached solidly and strongly against communism and taught Americans the truth of freedom.  Pastor Richard Wurmbrand who had been tortured for Christ for 14 years in communist Romanian prisons, told the truth of communism in his book, Marx and Satan.  J. Vernon McGee preached the truth of civil liberties and the dangers of socialism throughout his ministry, especially the last ten years of his life while he fought cancer. 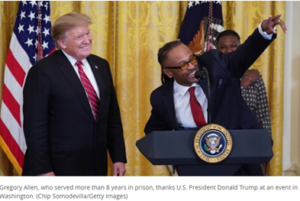 a communist one world government.  Our wonderful historic president knows the truth of the evil that pervades our beloved country and he is fighting with all his might against this perversion and destruction of American sovereignty and self-government.

It’s up to us, freedom or slavery.

You can see the six-page list of accomplishments, mostly completed by Trump with little help from the Republican Party and even less from the democrats.

President Trump’s Criminal Justice Reform fixed the 1994 Biden supported Clinton Crime Bill by passing the First Step Act with bipartisan support.  Kim Kardashian West and Kanye West brought attention to the case of Alice Johnson who had served 22 years of a first-time drug offense and was facing up to 28 more years in prison.  She spoke at the Republican Convention.

In April 2019, Gregory Allen was at the White House after being freed from eight years in prison.  He said, “Two months ago I was in prison, and now here I am telling my story in the White House,” calling it an example of what would, “make America great again.”

Freedom or slavery…we must choose truth.

Seems that everyone in America in attending Trump’s massive rallies.  At one specific rally in Arizona, where they were playing YMCA, Trump told the youngsters to come on the stage and dance to the 1978 YMCA song as MAGA.

Click on The Gateway Pundit article where you can see the video of President Trump telling them to get on the stage and then he gives a high five to the last fellow as he walks off and the kid is overjoyed!  Even if you’ve seen it before, watch again, magnifico!  You’ll never see another fabulous President like Donald Trump who loves all Americans.  He’s always in his glory when he’s with his supporters.

And then watch this magnificent three-minute campaign video…this is our great president talking about the majestic and spectacular country of America.

Catholic nuns love our President…one big reason…he hates the murder of unborn babies and has done everything in his power to stop this evil and macabre act against the innocents who feel the pain of violent abortion once the heartbeat is heard at six weeks.  They’ve shown up in mass at various rallies.

And again, The Gateway Pundit told of Amish men coming out for Trump last Monday at the Lititz, PA rally.  What a wonderful site to behold!

Legendary NHL player Bobby Orr took out an ad in the New Hampshire Union-Leader last Friday expressing his support for President Trump’s reelection campaign.  And Jack Nicklaus, the legendary golfer, took to Twitter late Wednesday to endorse President Trump and urged Americans who have not made up their minds to give the incumbent another look.

Rappers “50 Cent” and Lil Wayne have both endorsed Trump…all of them are feeling the heat.  But these supporters, the “deplorables,” are choosing freedom.

Every article about the successes of Donald J. Trump has a disclaimer regarding how he speaks or what he tweets or how he’s not as couth as the Deep State political vipers with their honeyed lies.  No!  He tells the truth as he sees it…just like we do to our friends and even our enemies.  He’s honest, he’s sincere and yes like us, he isn’t perfect. 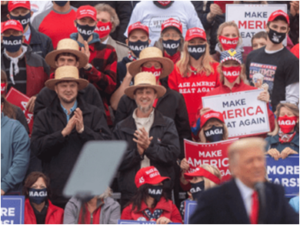 None of the politically correct“well spoken” presidents from LBJ to Obama were as sincere and openly honest as Donald J. Trump.

President Trump tweets to speak to us…he tells us what he thinks, and how else could he communicate?  I love that he speaks his mind and we don’t have to guess what he really means.

Biden and Harris are hellbent on socializing America and making her into another communist nation.  We would never recognize the America they desire for us.  Multi trillions of worthless dollars would be spent on socialized medicine, environmentalism, destruction of the God given freedoms within our unalienable Bill of Rights, including the right to keep and bear arms.

Their goal is to create an America based on Marx, Engels, Lenin and Stalin, and even the murdered millions of Mao Zedong, where a “red holocaust” of death transpires, fully implementing the United Nations Agenda 2030 of mass population reduction. 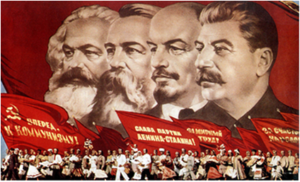 The danger to the American Republic in the past years — with threats to undo the Constitution by, for example, abolishing the electoral college, banning guns and eliminating free speech has therefore become imminent, and they’re now pushing a revolution to do exactly that.

The Gateway Pundit reported that Lisa Fithian is an anti-capitalist revolutionary who became a top street organizer of the violent Occupy Wall Street movement. She even held training sessions for the protests in Ferguson, Missouri.  This communist revolutionary is now plotting the violent takeover of Washington DC following the presidential election.  Their goal is a revolution much like the 1917 Russian revolution, that turned that country into a communist bastion of death and deprivation.  She’s not alone in her desire to destroy America and freedom.

The mainstream media arm of the Democrat Party refuses to tell Americans the truth regarding Joe Biden’s 47 years of political corruption and how he used his son, Hunter, as the pimp who brought home the money.  Honest journalism is dead, and Marxist censorship is the rage with Twitter, Facebook, Google and others.  Truth has become hate speech in America.

President Trump continues to rage the battle to save the America so many of us grew up in and love, and he has done it while the enemies of freedom have ravaged his reputation and good name which began June 16th, 2015, the minute he and his beautiful wife strode down the escalator in Trump Tower to announce his run for president.

He is not a politician, thank the Lord.  He is a businessman who strives for success in every endeavor he sets his mind to conquer and win.  He has succeeded with very little help, but with knowing that Americans who love and support him are behind him every step of the way.

Thousands upon thousands show up to get a glimpse of this great historic president at every rally.  Why?  Because he is truly a man of the people, he is one of us and he loves America and her people.  He is just and honest and decent in every endeavor and despite the attacks of the communist enemies of freedom within the Democrat Party, this man smiles, works long hours, gives his yearly salary to veteran organizations and continues night and day in his quest to save America.

May God bless, protect, keep him, guide him and grant him great wisdom in everything he sets out to accomplish in saving our beloved country.

It’s our choice.  Which will you choose?  Freedom or slavery?