The Church of Tolerating Everything 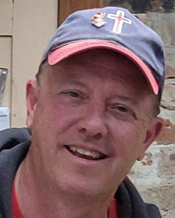 And do we really believe that our fellow men do not also spit out the tepid?  — Anthony Esolen

I am helping my good friend Coach Dave Daubenmire prepare for the big gun rally planned for Richmond, Virginia on January 20th.  In twenty days armed men from all fifty states in America are planning to descend on New Virginia.  Old Virginy never would have countenanced a Governor like this one.  Famously he’s down with executing born babies.  Now he wants to take everybody’s guns.

The whole world was privy to the execution by shotgun of two virtuous Christian men just four days ago.  If it weren’t for a good man with a gun would more Christian people have died Sunday morning?  Whether we like it or not the devil’s violence is coming to church with us.  What are we going to do about it?

Are we going to continue to sleep walk in our comatose state believing that bigger and bigger government is the solution to everything?  Or are we going to start stepping up and taking personal responsibility for ourselves and those we love.  Here’s what Sunday’s hero, 71 year old Jack Wilson, said, “I feel like I killed evil.”  Well, good for Jack.  I watched the video of his heroic deed a number of times.  Based on the reaction of the congregation and the pastor that is depicted in the video I’d have to conclude that their response would be “I feel like I bowed and groveled to evil.”

Christians especially have NO INSTINCT for even survival anymore, not to mention the confrontation of evil.  We are committing suicide.  I won’t recount the evidence here.  You know what I’m talking about.  The West Freeway Church of Christ is an exception to the rule.  Most churches across the fruited plane proudly display “Gun Free Zone” signs on their front door.  They’ve contracted the protection of their congregation to the local police.  That would not have worked on Sunday in Texas.  As columnist Michael Dorstewitz observed, “Criminals don’t recognize gun free zones. That’s why they’re called criminals.”

When I saw the pastor’s reaction in that video when the shots started ringing out I thought of myself.  I would have reacted in exactly the same way.  He instantly dove for the floor and started crawling in his humbled state for cover.  This is not right.  It isn’t Christian.  He’s the sheepdog of the congregation.  His duty is to be first in protecting the innocence and lives of his congregation.  Instead we are all conditioned to think of him as our counselor and friend.  Do you see what we have enabled in our enfeebled theological condition?  We are committing suicide.  The oligarchs of the West hate God and Christianity.  We are their hostages.  We’ve developed a psychological alliance with our captors during our captivity.  There’s a name for it — Stockholm Syndrome.

Coach Dave Daubenmire is one of the few Christian leaders with any sort of following who has fine tuned his instinct to fight.  He is a clever wordsmith.  And you better hope that his instinct to fight prevails over the instinct of other sorts of men.  He plans to be in Richmond on January 20th.  While he owns guns, he is not going to be carrying that day.  He’ll be wearing a more potent weapon — poignant, pointed and provocative TRUTH.  He and the men who will join him will wear on their heads the helmet of salvation — a red cross hat.  Their breastplate of righteousness will be a T-shirt with an eye-grabbing graphic proclaiming, “Protect the Flock with a Glock.”  Protecting their back are the words, “Be Prepared:  The devil is coming to church!”  Beneath that is the scripture from Luke, “Then said he unto them … he that hath no sword, let him sell his garment, and buy one.”

Coach is a Christian politician of sorts — an activist.  War and the disintegration of civil society is always the consequence of failed politics.  Politics fail when politicians are self-absorbed and weak.  Christianity exists to stiffen their spine, and call them to virtue.  When Christianity fails in her duty society collapses.  And make no mistake, Christianity is failing profoundly in her duty right now in the West.

We must not fail to learn the lessons of White Settlement, Texas.  The government failed in every way.  The government knew the gunman intimately.  He was no stranger to them as a dangerous criminal.  Trusting that institution right now is a BIG mistake.  If men truly care about all that is good, true and beautiful we will follow Jack Wilson’s lead and equip ourselves with the instinct and tools to “kill evil.”

Every Christian pastor and priest in America should stand beside Coach in Richmond on January 20th.  After Sunday’s shooting they have NO EXCUSE.