Home/March 2020, Opinions/The Coronavirus May Not Get You But Socialism Could

The Coronavirus May Not Get You But Socialism Could

“Socialism violates at least three of the Ten Commandments: It turns government into God, it legalizes thievery and it elevates covetousness.  It has no moral justification whatsoever; poor people are not morally superior to rich people, nor are they owed anything by rich people simply because of their lack of success.   Socialism states that you owe me something simply because I exist. Capitalism, by contrast, results in a sort of reality-forced altruism: I may not want to help you, I may dislike you, but if I don’t give you a product or service you want, I will starve. Voluntary exchange is more moral than forced redistribution.   When people are desperate or wealthy, they turn to socialism; only when they have no other alternative do they embrace the free market. After all, lies about guaranteed security are far more seductive than lectures about personal responsibility.” —Ben Shapiro, radio talk show host

The enemy of reason is upon us!  Fear!  Panic!  Frenzy! Terror! Dread!  Horror! Hysteria!  Confusion!  Hording!  Stress!   So many Americans are running around like a chicken with its head cut off.

No!  We are not minimizing the threat and risks of the Coronavirus.  But, it, like Ebola, Measles, Flu, Sars and Mers viruses (and who knows what else) are alive and well on the planet and they rise up every now and then to test our metal.  (Remember the hype about the Measles outbreak last year?  There were only 971 cases and yet we panicked over that too because of the news media!) 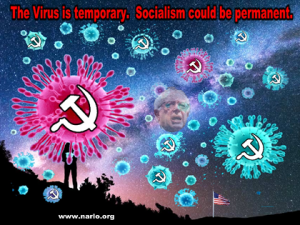 The CDC estimates that around 31,000,000 Americans have caught or will catch the flu this year, 370,000 could end up in hospitals for treatment and at least 56,000 could die.  We don’t see any panic rising in the population over flu deaths.  There’s no hoarding or cleaning out store shelves.  There is no mass media saturation on flu news stories.

We’re panicking because we are being deluged and fed a steady diet, 24 hours a day, with negative news stories about the Coronavirus.  Fear is contagious, just like a disease.  Nevertheless, it is very unlikely that 31,000,000 Americans are going to catch the Coronavirus this year because of the extraordinary steps we are taking to minimize the spread.  It is equally unlikely that the death rate will exceed the 56,000 who die every year from the flu.

Yes, the economy will suffer, some people will lose their jobs, some businesses will go out of business and the GDP will take a hit.  But it’s not permanent.  We will bounce back.

For once the government is coming through with solutions, working with the private sector, to help ward of the threat.  Trump is leading the charge.  We’ll come through this and after it is over, we’ll wonder what was all the fuss about?  At the end of this article is a link to another article with a credible prediction of the final path of the Coronavirus.  It’s worth your time to read it.

The Coronavirus will fade into memory in a fairly short time, but the move towards socialism is on-going and relentless.  The Democrats are the carriers of that relentless torch of socialism and they won’t be deterred from their goal by a bunch of namby-pamby, RINO Republicans who don’t have the cojones to challenge and stop the Democrats in their tracks.  Being NICE is no way to stop an evil enemy.  Courage, determination and sometimes force are the only way.  (See: “How Has Being ‘Nice’ Worked Out For You“)

Yes, America is a great country and collectively, we seem to be able to face our problems with a stiff upper lip and a determination to find solutions to those problems as we are doing now with the Coronavirus.  Nevertheless, not everything is peaches and cream.

What we see on the surface belies what is terrorizing us from the shadows.  Our freedom is declining, the constitution is becoming meaningless and representative government is essentially dead.

The people are losing their grip on morality, honor, integrity and honesty and as we have written many times before, government and people without honor will not work.

Drug and alcohol use is pandemic and the current entertainment, screen and music, borders on debauchery.

Out-of-control immigration, a deteriorating and expensive health care insurance system, public schools and colleges being used as institutions of socialist and environmental indoctrination, rising homelessness, a Democrat bought and paid for news media, onerous taxes, an ever-escalating national deficit and debt and way too many rules and regulations haunt our every day lives.  Unexplainably, most Americans sit on their hands and do nothing, or don’t care.  Oh, they might bitch a little, but that’s about all.  Consequently, the problems keep getting worse.

The largest of these problems, that can only be solved by government, are mostly ignored by the President, Congress and the bureaucracy.  Trump is trying but the corrupt Establishment from both parties is in control and the deep state is out of control.  International financial and corporate forces are doing everything in their power to erode our national sovereignty.

Is there anything that freedom-loving Americans can do about it?  No!  The problems will not go away and they will continue to plague us.  Not until there is a mindset shift in a large segment of the population towards the return of the principles of freedom will we begin to see a change in attitude towards the rebirth of freedom.

If individual freedom and unalienable, God-given rights have no meaning to the masses, socialism, communism, fascism, or radical environmentalism, take their place.  When the people aren’t paying attention, the Bernie Sanders, the Alexandria Ocasio-Cortez’s of the World and socialist Democrats rise to fill the void.

There is only one thing that can start an avalanche towards that mindset shift and that is adapting to an idea or a symbol that carries and represents those fundamentals of freedom.  In just 500 years, the idea of Christianity swept the Middle East, Europe and North Africa, until finally it swept the entire globe such that there are 2 billion Christians on the face of the planet.  The symbol was Jesus, the Son of God.  The idea was that all men were created in the image of God.  From the symbol, Jesus, came the “principles” of morality and salvation.

From the American Revolution came the idea of individual freedom and natural rights.  The symbol of freedom became the American flag and the ideals it represented.  When we “rally ’round the flag“, when we “pledge our allegiance“, collectively, as a nation, we rally around the ideals (principles) that the flag represents.

What America needs is another symbol to rally around, like our flag, with the hopes of rekindling our alliance with the principles of freedom, a symbol that espouses freedom, liberty, un-biased justice and property rights and a symbol that exudes force, determination, patriotism, unity and courage.  All that is wrapped up in our “American Patriot” logo.  If this logo showed up by the millions on the windows of homes, on the doors of trucks, or on Facebook, Twitter, Instagram, or other Internet platforms and swept the nation like Christianity swept the world, the mindset shift towards freedom could literally happen overnight.  It won’t take 500 years.

Socialism doesn’t have to be our future.  Freedom-loving Americans can “Save the USA” and they can do it by a simple act of embracing and living a powerful symbol of freedom and the principles of freedom as embodied in our “18 Basic Principles For America.”

Remember!  The Coronavirus’ impact on humanity will be fleeting and short lived like most of these viruses. America will bounce back, probably stronger than ever. However, socialism and its savage effects will infect the entire world, including America, if we let it.

You can let the Coronavirus consume you and eat up your life, or, you can back up, take a deep breath and realize that of all the enemies that threaten freedom, the Coronavirus is the least of those enemies.  The news media-induced fear and guilt is government’s tool to further enslave us.

Americans are made up of lovers, peacemakers, activists and fighters.  Today, America needs, more than anything else, fighters.

(See:  “How Will The Coronavirus End?” from the “Live Science” website)