17 people were killed and 16 others injured in a mass shooting at Marjory Stoneman Douglas High School in Parkland, Florida on February 14, 2018.

Broward’s coward, Deputy Scot Peterson has been rightfully shamed for his failure to act. Not only did this deputy fail to enter the school to engage the gunman, he made radio transmissions commanding other officers to not go into the school and remain 500 feet away from the school. Peterson, in essence, set up a barricade safety zone for responding officers.

Peterson’s actions were borderline criminally negligent homicide, and were an act of omission; a failure to protect innocent life; a duty all law enforcement personnel are sworn to uphold. Many are outraged that this deputy was able to resign after being suspended and receive his full pension. Deputy Peterson, retired, shouldn’t lose his pension, but he should be rightfully shamed for his actions, or failure to act, and his department should face civil penalties from the families of the victims for this deputy’s negligence in doing his duty, and for the Broward County Sheriff’s Department for a complete failure in handling the incident by ordering responding units to not enter the school. 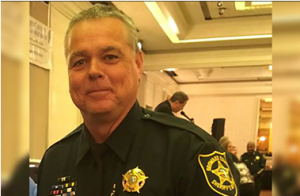 I all but know Deputy Scot Peterson’s type. His actions on the day that will define his life spoke volumes about his mindset and what he believed being a law enforcement officer was all about. He took the common law enforcement motto, “Be safe out there, protect yourself, and make it home safely at the end of your tour,” to another level. His concern for safety of self and his fellow law enforcement personnel was paramount. The protection of innocent lives, at the possible cost of his own life or a co-workers, was secondary.

Scot Peterson was Parkland’s school safety officer. He didn’t take that position because he cared for the safety of high school students. It was a cushy assignment that offered him weekends off. The thought that he may have to actually use the gun in his holster one day never occurred to him.

Peterson’s mentality was not only for the safety of himself, but for the safety of other responding law enforcement personnel. This explains his radio transmissions telling all responding units to not enter the school and remain 500 feet away from it. The gunman, Nikolas Cruz, was able to finish firing his semiautomatic AR-15 rifle, drop it on school grounds, and casually walk out the doors of the school. He was apprehended by an officer from a neighboring police department minutes later, as he was walking down a street at a good distance away from the school where he just killed 17 people.

Captain Jan Jordan was the commanding officer on the scene. She ordered the responding deputies and units to form a “perimeter” outside Stoneman Douglas High School, instead of rushing immediately into the building, as the mass shooting unfolded there.

WHERE HAVE ALL THE COWBOYS GONE?

Setting up perimeters is for hostage situations, not for a gunman who is actively opening fire on students.

This is going to sound like a male chauvinist statement, but this is what happens when you put women and liberals in the military and in law enforcement positions. They hesitate. They don’t know how to act in a crisis situation. Sure, they can do the job most of the time, but the part of the job they often fail to do is when they are needed most, in a crisis situation when they must engage in combat.

As a former New York City police officer, and after having spoken to many of my former colleagues from the NYPD, we all agreed that we wish we could have been in Deputy Peterson’s shoes that day. We radio transmitted our location and “shots fired,” then ran towards gunshots, not with a reckless disregard for our own lives, but with due caution, utilizing cover, and relying on the training and experience we gained throughout the years as police officers. That’s how we rolled.

It seems as if there was a culture of non-engagement at all levels within the Broward County Sheriff’s Department. Could it be that a liberal mindset that “guns are bad” has permeated this organization, so much so that even the thought of their own deputies using guns to protect human life was unpalatable to this department?

In the aftermath of the Parkland school shooting, the usual liberal Democrat advocates surfaced, ready to push new gun control legislation upon law-abiding gun owners, as if disarming law-abiding gun owners will somehow solve the problem of gun violence in America. This time the liberals and the media began using new props: children, to advocate for tougher restrictions of guns. The reasoning, of course, is that they believe no one can question the wisdom of children, the potential victims of such shootings.

Using children is a propaganda tool that has been employed before by totalitarian governments, including Nazi Germany and the PLO. Palestinians would launch rockets at Israel, then put their own children at their military installations, so when Israel responded, they would kill Palestinian children in collateral damage. Then the Palestinians would get the media to report on Israel massacring their children. So now the leftist media in America hopes to do the same: use children as human shields to suppress discussion while advancing the cause of gun control.

THE RIGHT OF THE PEOPLE TO KEEP AND BEAR ARMS, SHALL NOT BE INFRINGED

The Parkland school shooting showed a government system failure on all fronts. Law enforcement personnel cannot be relied on to protect life in place of self-defense.

Prohibition of alcohol did not work in America and neither will gun prohibition. Liberals often live in a sort of fantasy world, where they think that if you just pass a law, you can make things go away. In the case of mass murder gun shootings, all that needs to be done is to ban “assault” rifles, and then they would disappear from the world. Things don’t work that way in the real world. When liberals place signs up in schools that read: “Gun Free School Zone,” a serial killer sees, “No Resistance Killing Field.”

For even if it came to pass that the Second Amendment was overturned and gun ownership throughout America was outlawed, then American people would do what was done during the alcohol prohibition years. Countless garages would be turned into gun manufacturing factories. Making a gun is not beyond the capabilities of the common American metal craftsman. Guns are easily manufactured and cannot be un-invented. The right of the people to keep and bear arms is the basic human right of self-defense and to protect the people from tyrannical government.